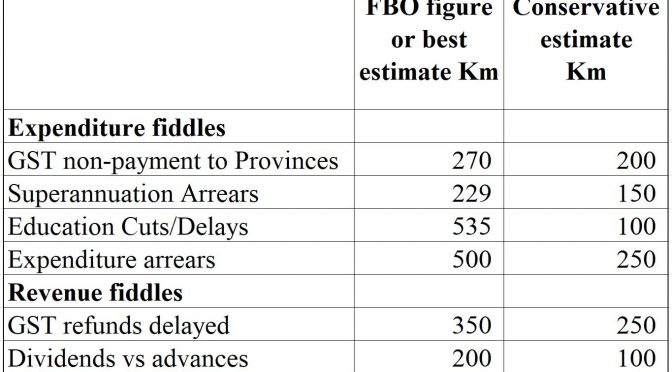 Deputy Prime Minister and Treasurer Charles Abel’s credibility was on the line. Did he actually deliver on the 100 Day Plan promised reduction in PNG’s 2017 budget deficit from unsustainable levels?

Even a 4% outcome would have better than the budget deficits of 2014 to 2016. However, the reductions were made in the wrong way. Expenditure was cut entirely in areas key for PNG’s future growth and concessional loan projects were delayed. Even using FBO figures, the blow-out in operating expenditures entirely consumed the claimed increase in revenues. This would have been bad enough. However, expenditure was likely K700m greater than revealed, and revenues likely K350m lower, meaning the operational side of the budget is not under control.

The following table summarises my best judgements on the likely impact of certain questionable elements of the FBO. There is a lot of detail in the previous two blogs which informs these judgements. Sometimes, the story is quite complex. The first column of numbers represents either figures derived from the FBO (4 items) as well as best estimates of expenditure arrears build-up and dividend shortfalls (2 items). However, given uncertainties and the lack of transparent information, I have also included a second column with a conservative estimate on likely impacts on the bottom line. Once again, this is based on judgements after having worked on budget documents over many years, and having some insights on what is possible. If I was just being suspicious about the figures in the FBO, I would be worried that the deficit would have blown out by over K2 billion. I am being conservative, and allowing for some administrative errors, it is almost certain that the deficit is at least K1 billion greater – so more likely K2.8 billion rather than K1.8 billion. Readers can make up their own minds, after hopefully being informed by the detailed analysis of the previous three blogs, of what numbers they consider should be in the right hand column. Of course, any increase in the deficit will eventually appear as higher debt levels and interest costs, assuming the government meets its legal obligations in contracts and legislation.

Summary of likely sources for understating the 2017 budget deficit 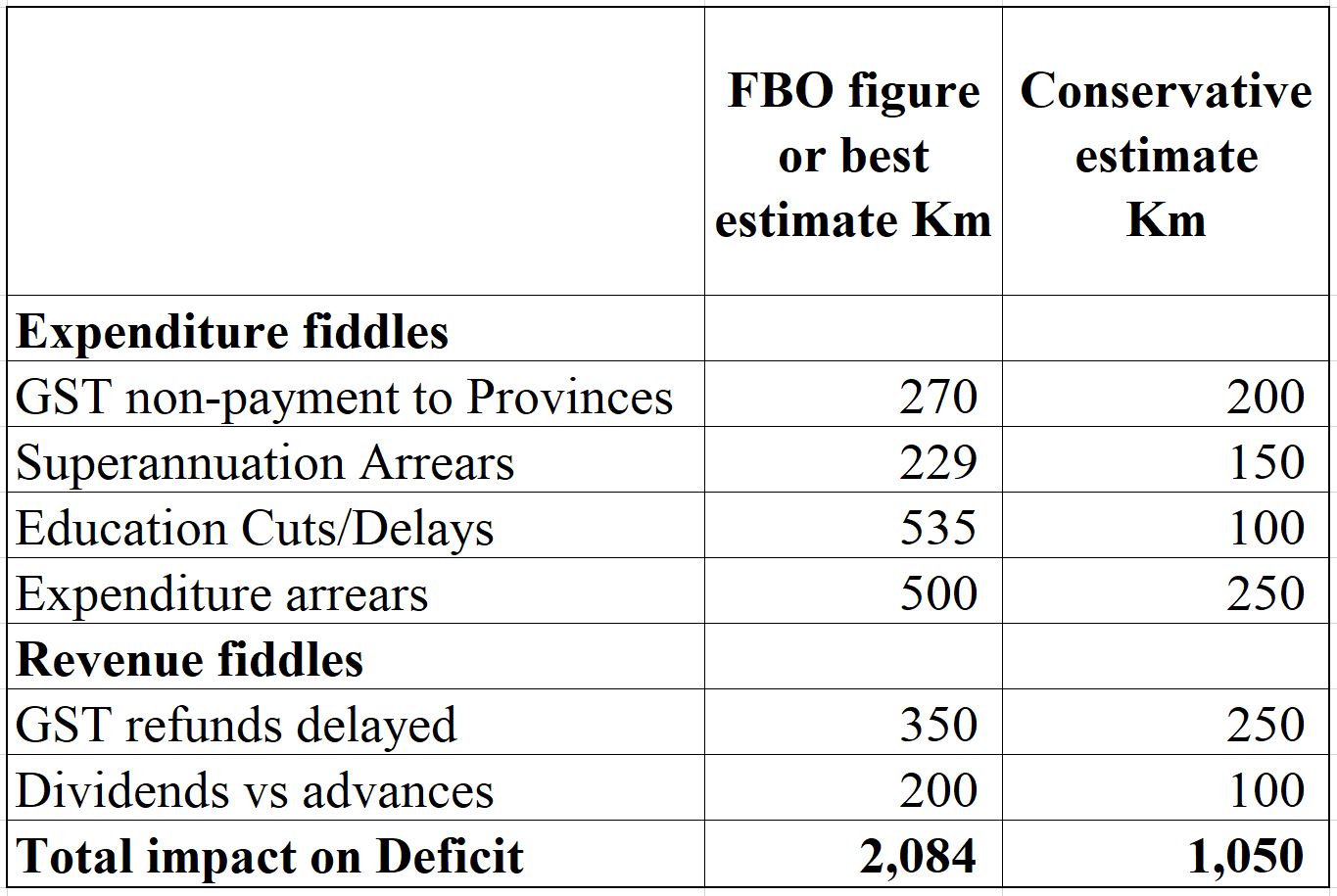 There is a legislative requirement to have a Final Budget Outcome (FBO) of the previous year by 31 March. This should be the authoritative statement of actual government revenues and expenditures. Having closely examined all the FBOs from 2010 to 2017 (and being involved in the preparation of the early ones), the 2017 FBO is the worst one yet.

One is left with a sense of unease. Some claimed cuts are just not believable such as the K535 million cut to education. The cut of K229 million to superannuation is also not credible. Games seem to have been made with trust accounts such as likely deferred payments of GST to Provinces of at least K200m. The large jump in GST collections is not credible – and can be explained by deferring GST refunds by at least K250m. There are clearly large expenditure arrears – the issue is acknowledged in the FBO but one needs to go to Parliamentary statements to get an idea of their magnitude (for example, the Public Works Minister has acknowledged arrears of K700m).

Ultimately, the final outcome is just too convenient. The Treasurer wanted a result no more than the promised 2.5% budget deficit in the 100 Day Plan and in his Supplementary Budget, and preferably something better. His Secretary delivered a deficit of 2.4%. The political convenience of the outcome combined with the games in under-reporting exporting and over-reporting revenues shown in the FBO indicate the deficit was adjusted downwards to hide the likely truth.

The Treasurer should have accepted the budget did not turn around as quickly as he had hoped, allowed a bit more time for correcting likely errors in a rushed report, and thereby maintained the previous levels of trust in a genuine, even if frank, Final Budget Outcome. However, it is still not clear that he understands the difficulty of turning around five years of poor fiscal management. The budget itself is not sufficiently transparent to deal with some key issues, especially around the level of expenditure arrears and GST refund delays. Including more information on these two critical areas in the forthcoming mid-year update (the MYEFO) would help restore some trust.

An implication of this analysis is that budget pressures will be greater in 2018. In the same way as a household which does not pay its bills on time, deferring expenditures and revenues simply builds pressure up the next year. The 2018 budget was already built on some dubious numbers – with expenditures and revenues well above the optimistic scenario by the IMF in its latest assessment. Adding at least another K1 billion to these pressures from expenditure and GST refund arrears highlights the challenge of PNG’s on-going high deficit levels.

Unfortunately, given the political situation, I do not expect the mid-year budget update due by the end of July (the MYEFO) to provide a more transparent or honest statement of the government’s actual fiscal position. One can no longer trust the government’s budget documents. PNG will likely go into APEC with many questions hanging over its true economic situation.