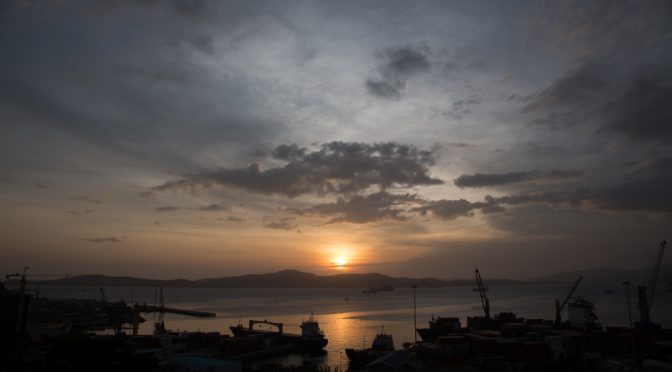 There are positive elements indicating progress in key areas such as the payments system as well as sensible messaging from the central bank on good policies.

PNG has moved to a fixed peg exchange rate system against the US dollar. The Kina is now neither freely convertible nor market related.  This is despite April 2016 and August 2016 having very large foreign exchange outflows even after the resumption of Ok Tedi mine exports and strong cocoa and coffee exports.

Inflationary pressures are slowly mounting (with a 7.5% forecast for 2017).

The overall Balance of Payments is expected to have a small surplus in 2016 and then return to deficit in 2017 and 2018. This will maintain pressures on foreign exchange and international reserves.

Net lending to government has been growing at extraordinary rates from 2014, including a 76.9% growth in net claims by the government sector in the first seven months of 2016. The projections of this falling away are not realistic.

PNG’s central financial institutions are continuing to perform a vital role in difficult circumstances – both the Bank of PNG and the Treasury.

Between the lines of recent statements (this MPS and the earlier MYEFO), there are examples of cautious and prudent advice to a government heading into an election year made difficult by a serious economic recession – probably the second worst in PNG’s economic history.

If the scope of such reporting is reduced, or the key leaders such as BPNG’s Governor Loi Bakani are moved, this would be an emergency warning light that PNG may be heading into a downward spiral of poor economic governance.  This in turn could lead to a decade of lost opportunity through poor growth for PNG’s citizens.

Many suggestions are made of a sensible way forward for PNG’s economic development including a more diversified approach to development, supporting SMEs through financial literacy training and entrepreneurship, some specific suggestions on SOEs exploring private sector linkages and suggestions on more prudent cash management so contracts are made on time (a complaint about late payments by government coming through the business survey).

There are also some carefully crafted words on the importance of establishing appropriate policies to boost investment and growth (in contrast to existing government policies in areas of SMEs, land and agriculture which will undermine sustainable growth).

PNG’s payments system continues to modernise and the recommendations that the government use more electronic funds transfers are welcome.  Progress on anti-money laundering is positive.

There are practical steps being taken to develop the Administrative Secretariat of the SWF (although the design of the fund remains seriously flawed with the Kumul entities being able to hold back resource dividend payments).

There is positive news that any new monetary policy mechanism is still in negotiation with the IMF and other stakeholders – this would be a key issue for the credibility of the independence of the central bank. The initial mechanism suggested in the March MPS may have been open to government manipulation of budget funding requirements.

As past posts have indicated (see here and here and here) there are concerns about the direction of PNG’s exchange rate policy. PNG has an excessively high Kina relative to market fundamentals and this is hurting most of PNG’s population. Moving PNG’s exchange rate to a more competitive setting may increase inflation for all Papua New Guineans by a few percentage points, but it also increases incomes to millions of rural people by much more.  The gainers of a more competitive exchange rate are not just a few importers – it is all of PNG’s cash crop exporters and those that may gain from increased investment and future growth in agriculture, tourism, import-competing industries and other exports.

The depreciation of the Kina relative to the US dollar has been artificially stopped – it has moved to being a fixed peg over the last few months.  Interestingly, this has been at a time where foreign exchange net flows have been generally quite negative.  Indeed, the net flow of foreign currency out of PNG in April 2016 was the worst monthly result since 2013 (the large negative column shown in the Chart below which is directly from the MPS) and the August 2016 negative outflows were the second worst result since December 2014. This indicates that there is still a long way to go before restoring any sort of equilibrium in foreign currency markets. 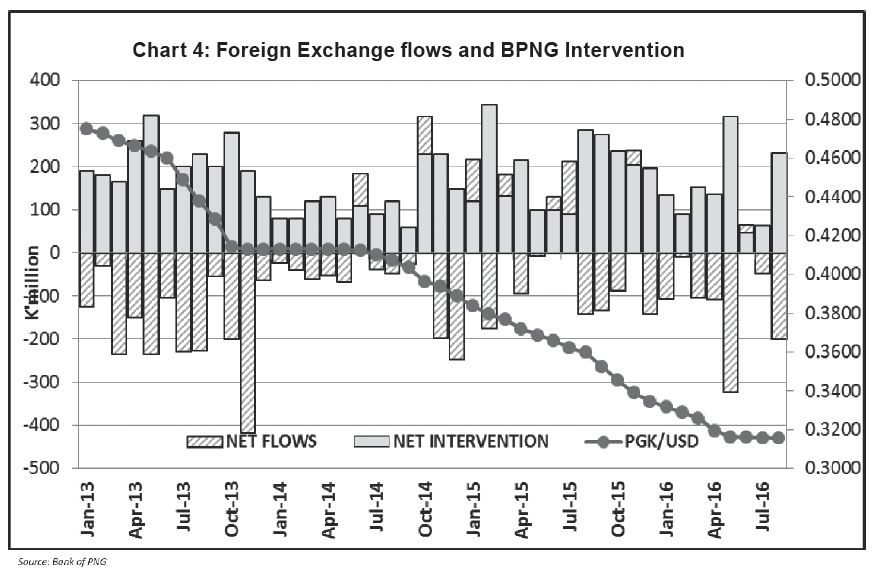 The very poor outcomes in April and August 2016 have occurred even at a time of the resumption of mining and exports from Ok Tedi and favourable exports of cocoa and coffee.  These were two developments that were hoped to turn around some of the underlying problems in PNG’s foreign exchange market but they have not been enough.  With the move away from using a price adjustment, the policy focus then moves towards further quantitative restrictions.  And the MPS makes clear that foreign exchange controls have been tightened again. Experience overseas suggests that the market will once again evolve around these new restrictions, although at increasing cost to local businesses and growth.

These new quantitative restrictions are based on giving priority to spot purchases. This is indicative of a policy crisis.  Essentially, non-spot transactions (so most capital movements rather than just direct payments for imports) are being locked out of any freely convertible currency arrangements.  This means that firms in PNG may find it easier to pay for imports, but still cannot pay shareholders’ dividends. People who are retiring from business or who have been scared off by current government policy settings find it hard to sell their business. These are type of incentives that cripple foreign investment that is vital for PNG’s future growth prospects.

The information on movements in monetary and credit aggregates (Table 1 in the MPS) is surprising and deeply disturbing. Relative to slow credit growth for the private sector, the level of net government borrowing has been growing at a very high rate in recent years (51.1% in 2014 and a further 28.4% in 2015).  Extraordinarily, this has increased a further 76.9% through to July 2016. Implausibly, this growth rate is expected to plummet to only 1.8% for 2016 as a whole, and then decline slightly in 2017. This would only be possible if the sovereign bond was fully realised (some K2.5 billion) in 2016 and used to retire current government debt rather than meet budget cash shortfalls.  This is an unlikely scenario. 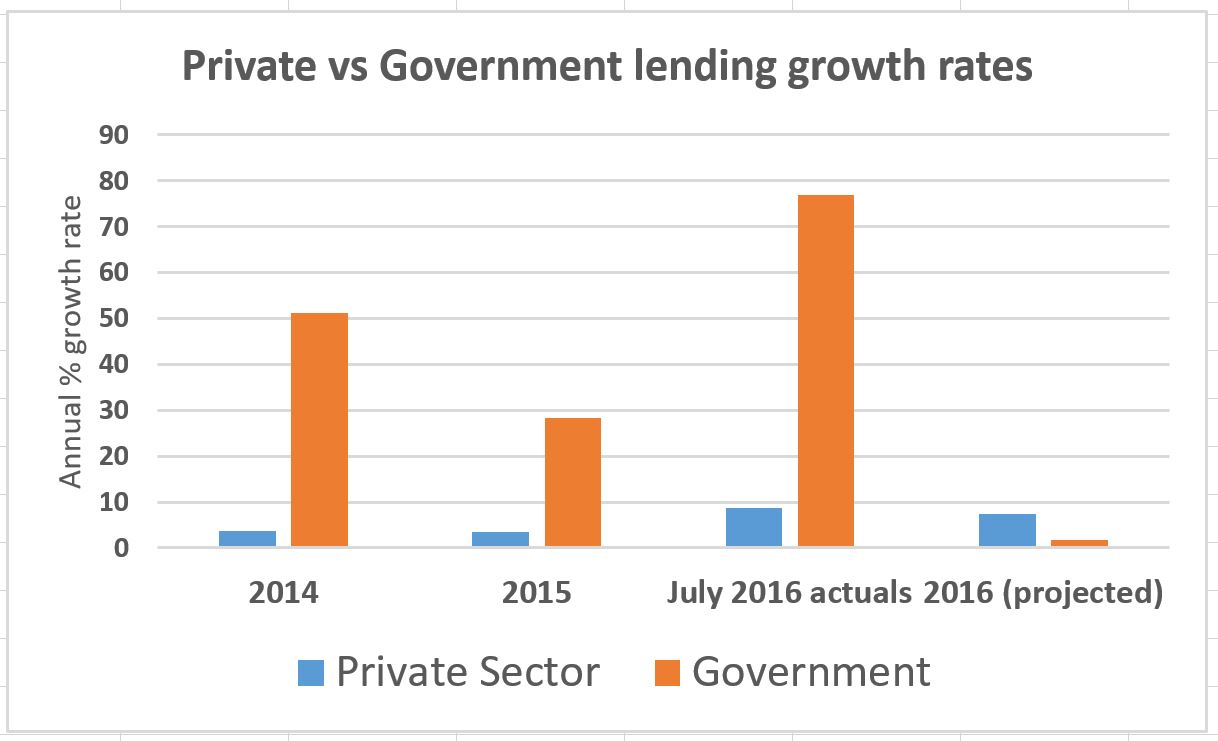 Looking forward, some of the projections in Table 2 of the MPS are interesting. Realistically, the overall balance of payments is not expected to return to a strong surplus over the medium-term. Balance of Payment deficits are forecast for 2017 and 2018 following a small projected surplus in 2016. This will maintain pressure on foreign reserves and foreign currency allocations.

Underlying this pattern of net deficits are some extraordinary growth rates.  The current account is expected to move to a surplus of K10.2 billion in 2016, and then jump to K14.4 billion in 2017.  Such a large increase, presumably driven by strong growth in exports, is very difficult to understand.  PNG LNG is already at full production levels.  There will be some on-going recovery from the drought, but 2016 has already included good cash outcomes from cocoa and coffee.  The price of LNG exports are only expected to increase slightly (from $US6.0 to $US6.1 per thousand mmbtu according to BPNG figures).  An offsetting increase in the capital and financial account deficit is also difficult to understand (why would these leap by over K4billion in 2017). More explanation should be provided to help build confidence in such forecasts.

Inflation is now expected to reach 7% in 2016 and 7.5% in 2017.  These forecasts are realistic given likely imported inflation pressures, although the lack of domestic demand should put downward pressure on most domestic prices.