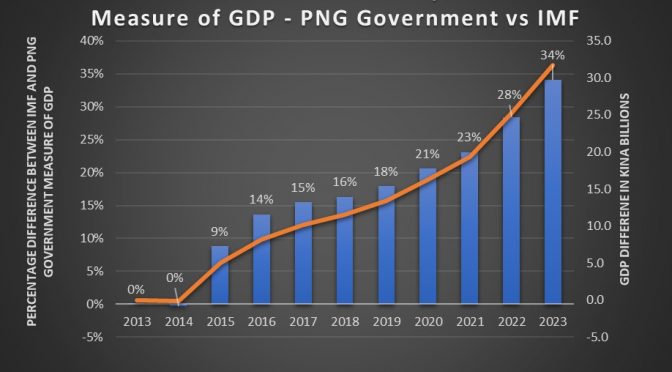 PNG’s economic statistics have been corrupted.
Even the most basic economic statistic of “how big is the PNG economy” has been manipulated to tell stories convenient to the O’Neill/Abel government.
An extra-ordinary gap of 18% (so nearly one-fifth) has opened between the PNG Government’s measure of the size of the economy (economists call this “Gross Domestic Product” or GDP) and independent outside observers led by the International Monetary Fund. Half of this gap emerged in 2015 when PNG’s own National Statistics Office (NSO), with assistance from the Australian Bureau of Statistics (ABS), said the economy was actually 9% smaller than claims by the PNG Treasurer.

The gap in this most basic economic measure is 34% (or one-third) by 2023. Specifically, the PNG Government claims the PNG economy will reach K125 billion while the IMF estimates it will more realistically reach 93 billion in 2023. The difference is driven by the IMF using the actual NSO GDP estimates for 2015, and doubts about the O’Neill/Abel governments claimed rate of PNG’s economic growth. 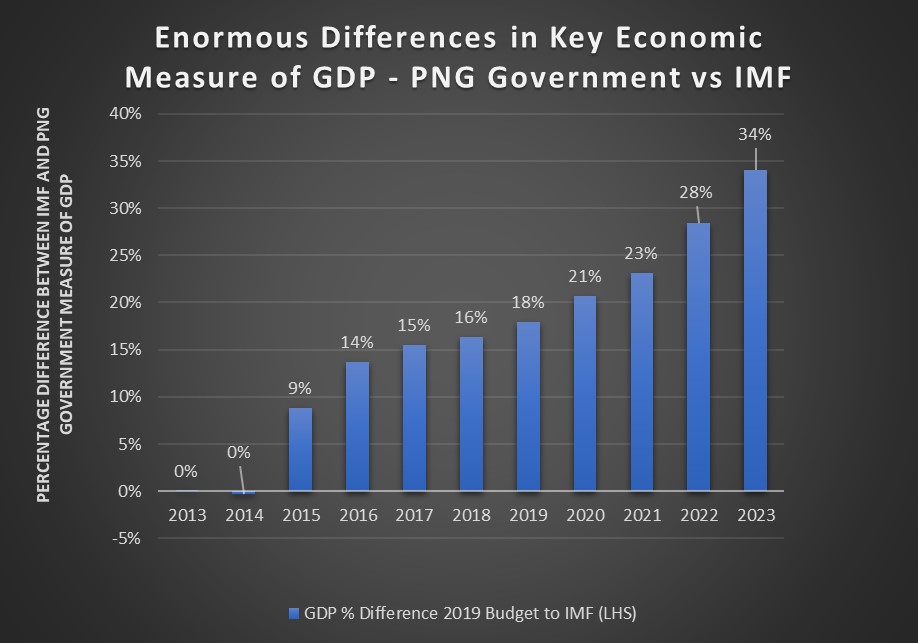 The NSO 2015 GDP figure was released on 9 March 2018. This date marks the clearest point from which the government started manipulating statistics – although there have been questionable practices in the past. The initial NSO release only included high level GDP information but indicated more details would be provided shortly. This never happened. Apparently, also with ABS assistance, 2016 GDP data was also prepared. This also has not been released.
The official attempt to explain the 9% difference in 2015 is lamentable and filled with basic errors. The blame is put on a new “price index”. However, one does not even use a price index when determining nominal GDP and the 9% gap is in nominal GDP. A price index is used for determining real GDP and differences in price methodology can have an impact. However, the government had been happy to use the new NSO price index for the eight years 2007 to 2014 when it was politically convenient. They just didn’t want to use the same price index for the ninth and tenth years of 2015 and 2016 when the results were politically inconvenient (details below).

The government has used the involvement of the Australian Bureau of Statistics (ABS) to boost its own economic credibility – and it did so again in the 2019 Budget. However, when discussing ABS support for better GDP figures, the IMF notes “however, the ABS recently suspended its program due to increasingly uncertain NSO leadership and management, which threaten its current operations” (IMF 2018 Article IV p10). Given recent practices over the last year, this would seem a sensible approach from the ABS – there was a need to walk away to protect its own integrity. The International Monetary Fund is using the NSO figure for 2015 and presumably for 2016 – a fact that must greatly irritate the O’Neill government.

The more detailed analysis will be published over the next three days in three articles:

I now predict that official PNG government figures will indicate, no matter what the actual truth, that the 2018 budget outcome exceeded its targets and that growth will become more positive. The government’s internal, overly optimistic narrative based on false figures will limit action on underlying economic issues such as a mis-priced exchange rate, poor micro-economic policies such as growing protectionism, dangerous approaches towards increasing foreign commercial debt to over 50% of its public debt, and ignoring business concerns about the 23 January anti-investment business regulation.

Greece went down a similar path of manipulating its economic statistics to hide growing budgetary and other problems from Brussels. It did not end well. Given its current leadership, possibly it is not that surprising that PNG is heading down a similar slippery slope where statistics give way to political convenience. I fear the outcomes will be worse than the Greek experience. PNG’s institutions will struggle to turn the economy around when it is so far off course and its economic compass of genuine statistics has been so seriously corrupted.

2 thoughts on “The corruption of PNG’s economic statistics – Summary”