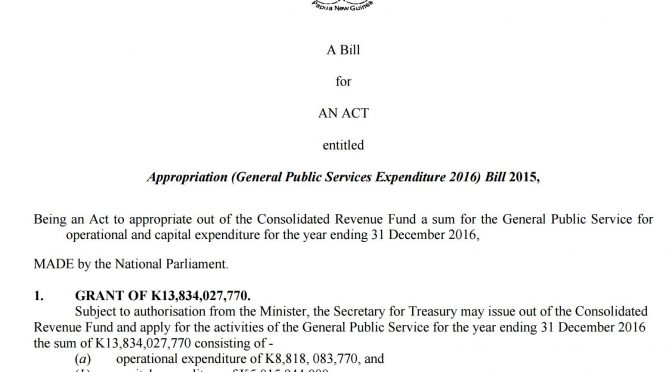 Looking at the issue by going back to 2012 of all Appropriation Bills and the contents of the Budget Speech and Volume 1 of the budget, I must conclude that there appears to be a very major issue indeed.  This is why we need Oppositions and democratic debate – these help highlight issues to inform better outcomes.

Looking at the available information, the issue actually appears to be with the 2016 Appropriation Bills (more specifically, Bill 303 of 2015 “Appropriation (General Services Expenditure 2016) Bill 2015 at here).

The incredible fact of this Bill is that Clause 1 only allocated K13,834,027,770 for total PNG government expenditure in 2016. The extract from the Bill is shown below. 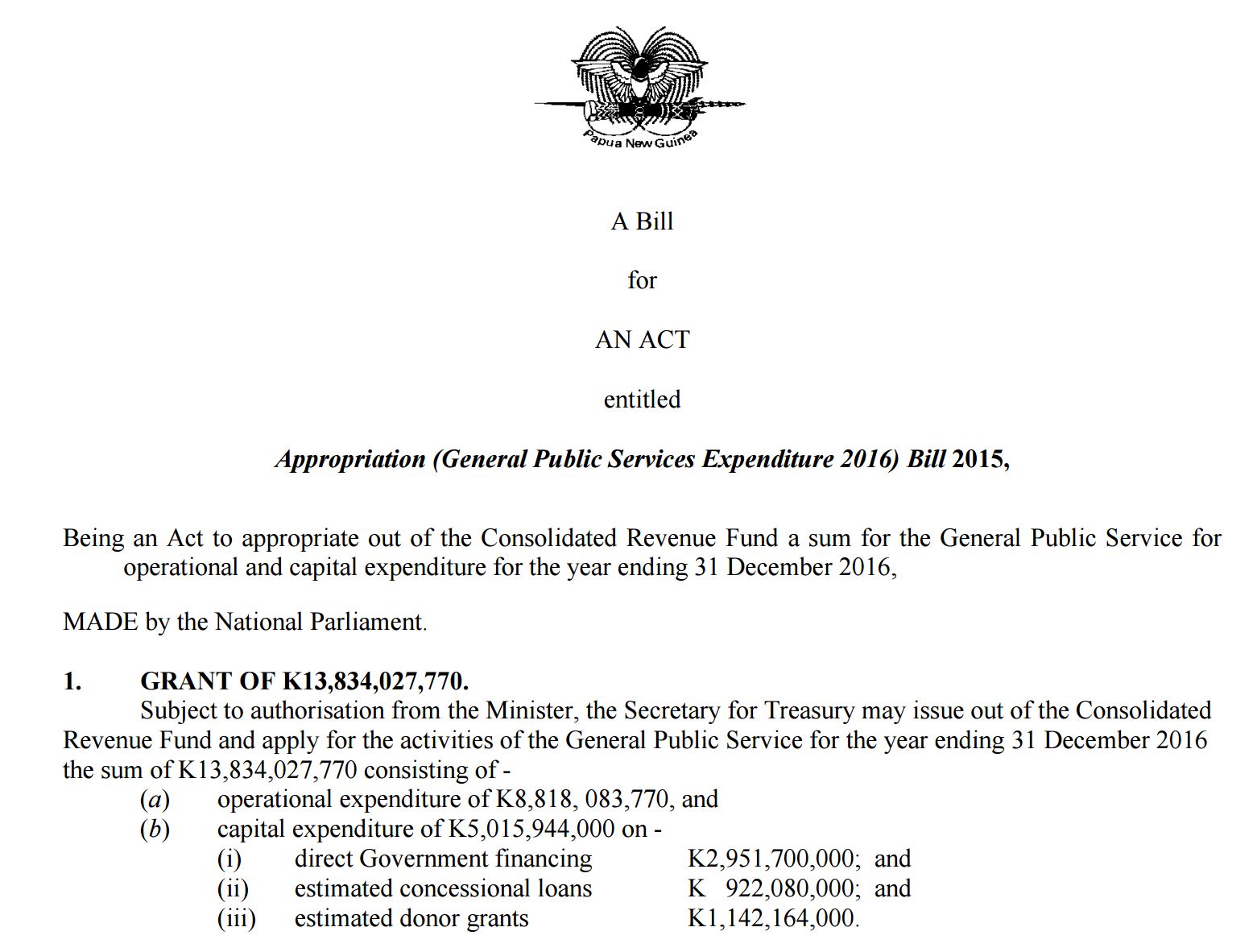 This same total was used in the important Explanatory Notes to Parliament. 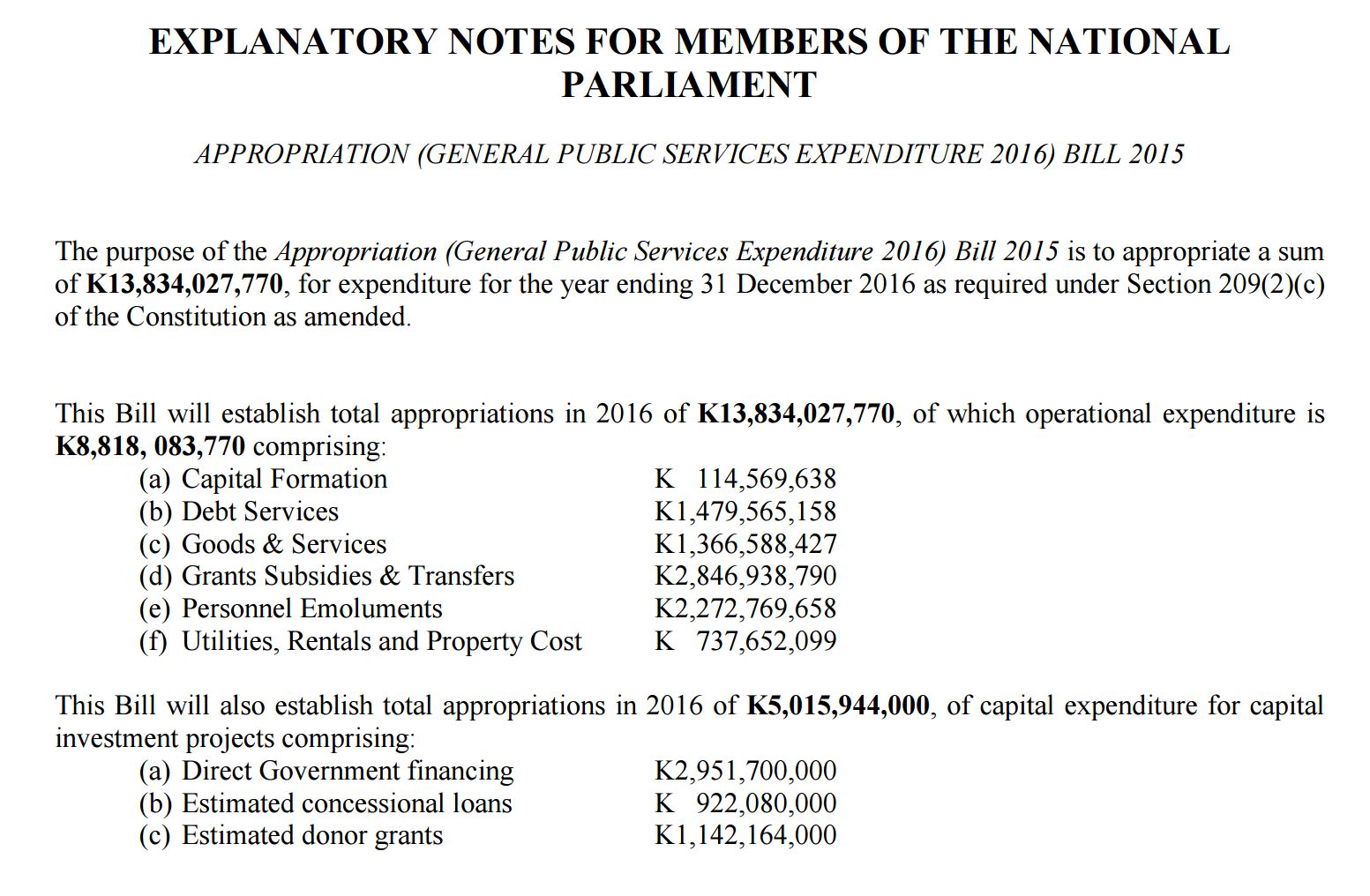 The key issue is that the wrong figure has been included for item (b) Debt Services.  K1,479,565,158 was built into the Appropriation Bill.  However, this was a mistake – a huge mistake.  For this covered only interest payments, not the rollover of government debt. 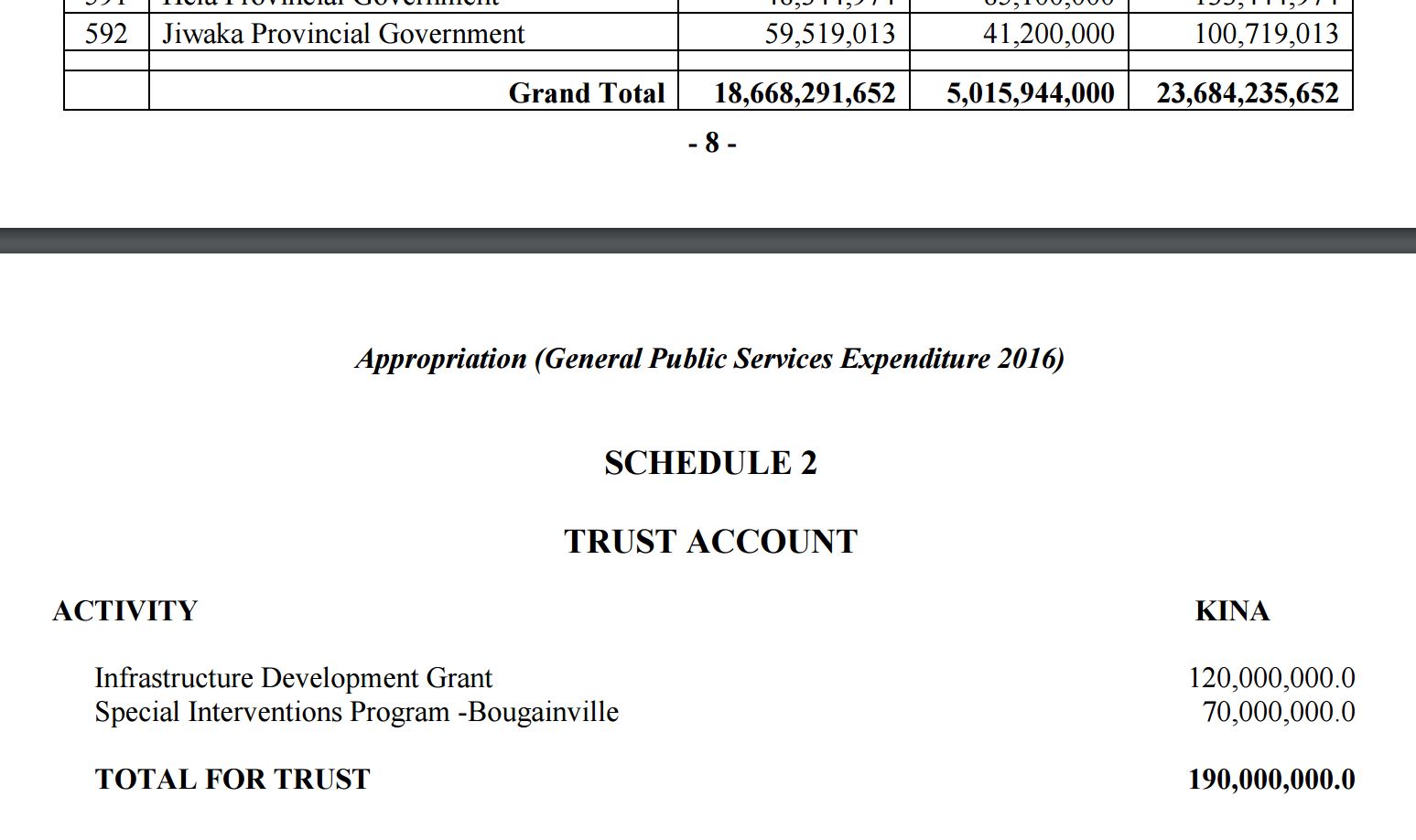 So the 2016 Budget should have allocated some K23.68 billion but it only allocated for expenditure from the Consolidated Revenue Fund the amount of some K13.83 billion.

What does this mean in reality?  There clearly was an error, but does it matter?  And as the original Bill (now an Act)  did include the correct figure in the Schedule, isn’t that good enough?

The relevant part of the PNG constitution  is Section 209 shown below. 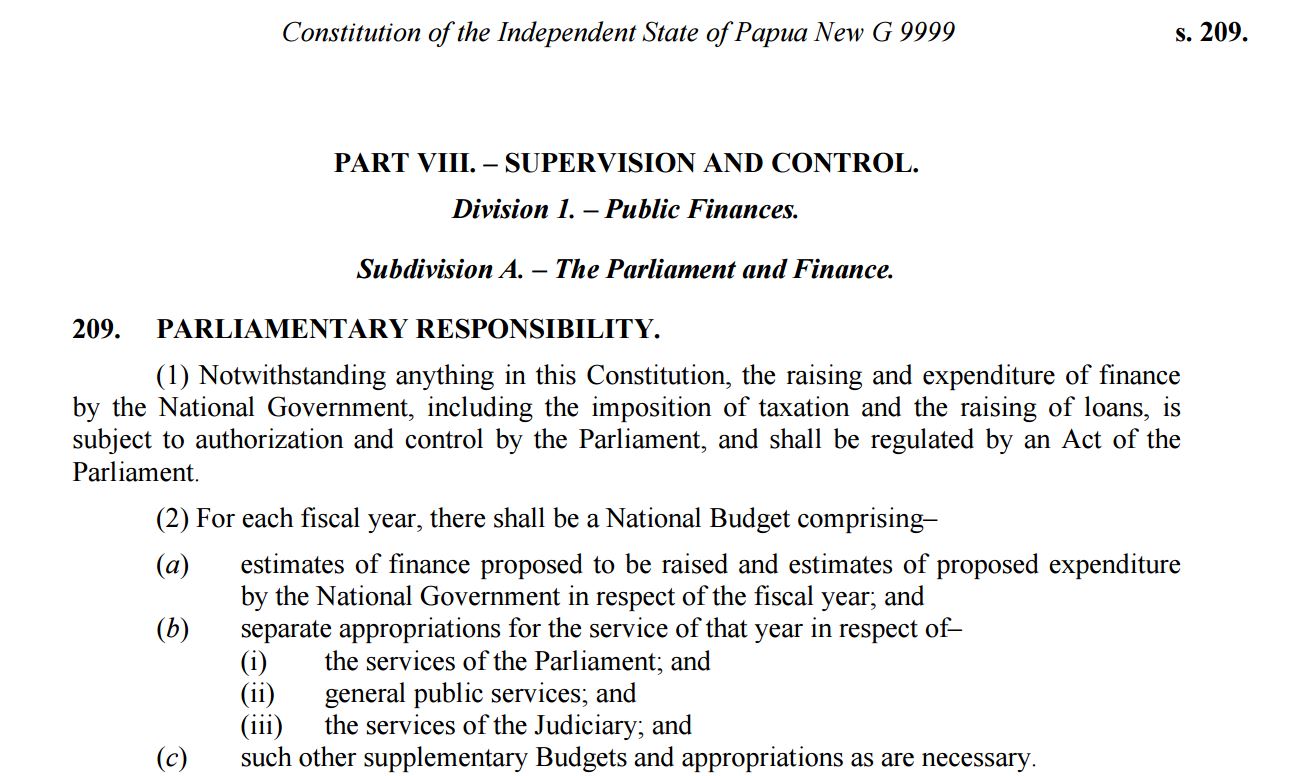 Essentially, only the Parliament can authorise expenditure of finance by the National Government.  It does this through an annual National Budget – and this is broken into three separate Appropriation Bills. The one that covers debt servicing, including financing the rollover of that debt, is the “General Public Services” Act above.  If the authorisation for financing is not in the Bill, then it is not authorised according to the Constitution.

Does having the wrong figure in a few places matter?  This may end up coming down to a court judgement.  As I read it, the error is in the primary clause of the Bill – Clause 1.  If there was any ambiguity, the usual practice would then be look at extrinsic material such as the Explanatory Notes to Parliament.  But these also use the wrong figure.  The correct figure is used in Schedule 1 but this schedule is only referred to in Clause 9, and the purpose of Clause 9 only relates to reallocations between appropriations and debt service – it in no way relates to adjusting the total level of budget financing.  My post-graduate training in constitutional law and statutory interpretation at the ANU suggests that there is a very serious error.

The likely only resolution of the error is a new 2016 Appropriation Bill – that is the requirement under the PNG Constitution.  That will require re-calling Parliament.

Possibly the interpretation could be that the error was in failing to appropriate financing for rolling over Government debt.  This relates to the repayment of Treasury Bills and Treasury Bonds or Inscribed Stock.  This would mean that all such repayments this year would be Constitutionally illegal. Until this is clarified, if I was a Superannuation Fund in PNG, I’d certainly seek legal advice before bidding on the next Treasury Bill offering.

Assuming an even pattern of expenditure throughout the year, legal expenditure stopped in late July or early August (so 56.7% of the way through the year).  If in Treasury or Finance, be careful about authorising that next cheque or transfer as it may be constitutionally illegal.

This is a mess. If the government does not act, it may be up to the opposition to seek clarification in the courts.

Once again, this is not a positive reflection on economic management in PNG.