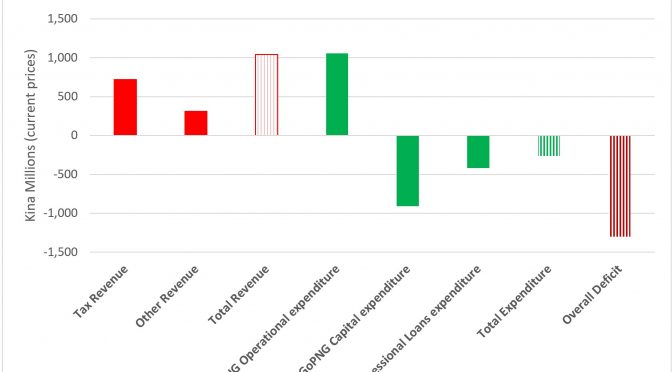 The O’Neill/Abel government continues to refer how new loans from the ADB and World Bank will help with PNG’s budget and foreign exchange problems. But why did they let K418 million in cheap loans slip through their fingers, especially on good projects already approved under PNG’s planning processes?

This is one of many questions raised by Treasurer Abel’s 2017 Final Budget Outcome (FBO) report. The 2017 FBO is a fascinating and worrying report – one that was clearly rushed given the number of errors in the document. This is the first of four blogs that will closely examine the document, its strengths and its weaknesses.

For those not wanting to wait to read through to the end of the four blogs, the conservative estimate is that the 2017 deficit is at least K1 billion greater than claimed by the 2017 FBO.

This blog will look at the “aggregate” view of the FBO, the second will focus on expenditure, the third on revenue, and fourth will make an overall assessment.

When looking at claimed total levels of government expenditure and revenue, it is interesting that the 2017 Budget outcomes matched that of Abel’s predecessor, now Opposition Leader Patrick Pruaitch, rather than the figures contained in the 2017 Supplementary Budget much trumpeted by the new Treasurer.

Specifically, total revenue estimates were K11.5bn in the Pruaitch 2017 Budget, 11.0bn in the Abel Supplementary Budget and the 2017 FBO outcome was K11.5bn.

On expenditure, total expenditure estimates were K13.3bn in the Pruaitch 2017 Budget, K12.9bn in the Abel Supplementary Budget and the 2017 FBO outcome was K13.3bn.

However, the movement in these aggregate figures mask a significant shift between domestic and donor funding. Increased donor funding was K471.8m between the Supplementary Budget and the 2017 FBO. Some would say this reflected a shift to increased aid dependency. Possibly it just reflected a more accurate prediction of donor flows.

On domestic revenues and expenditures, the Supplementary Budget was close to FBO figures.

The 2017 FBO provides some interesting information on what happened in the budget between 2016 and the claimed results for 2017.

At an aggregate level, comparing 2016 outcomes to claimed 2017 outcomes, revenues have increased by about K1 billion. All of this has been absorbed by an increase in operational expenditure of K1 billion. However, there have been reductions of K908 million in capital expenditure and K418 million in the use of concessional loan projects – both undesirable but “easy” ways to cut a budget.

These cuts in longer-term investments are K263 million greater than the operational expenditure blowout, and when combined with revenue increases, the budget deficit is claimed to fall by K1.3 billion.

The following graph provides a break-down of key movements in budget aggregates between the claims of the 2017 FBO and 2016 outcomes. 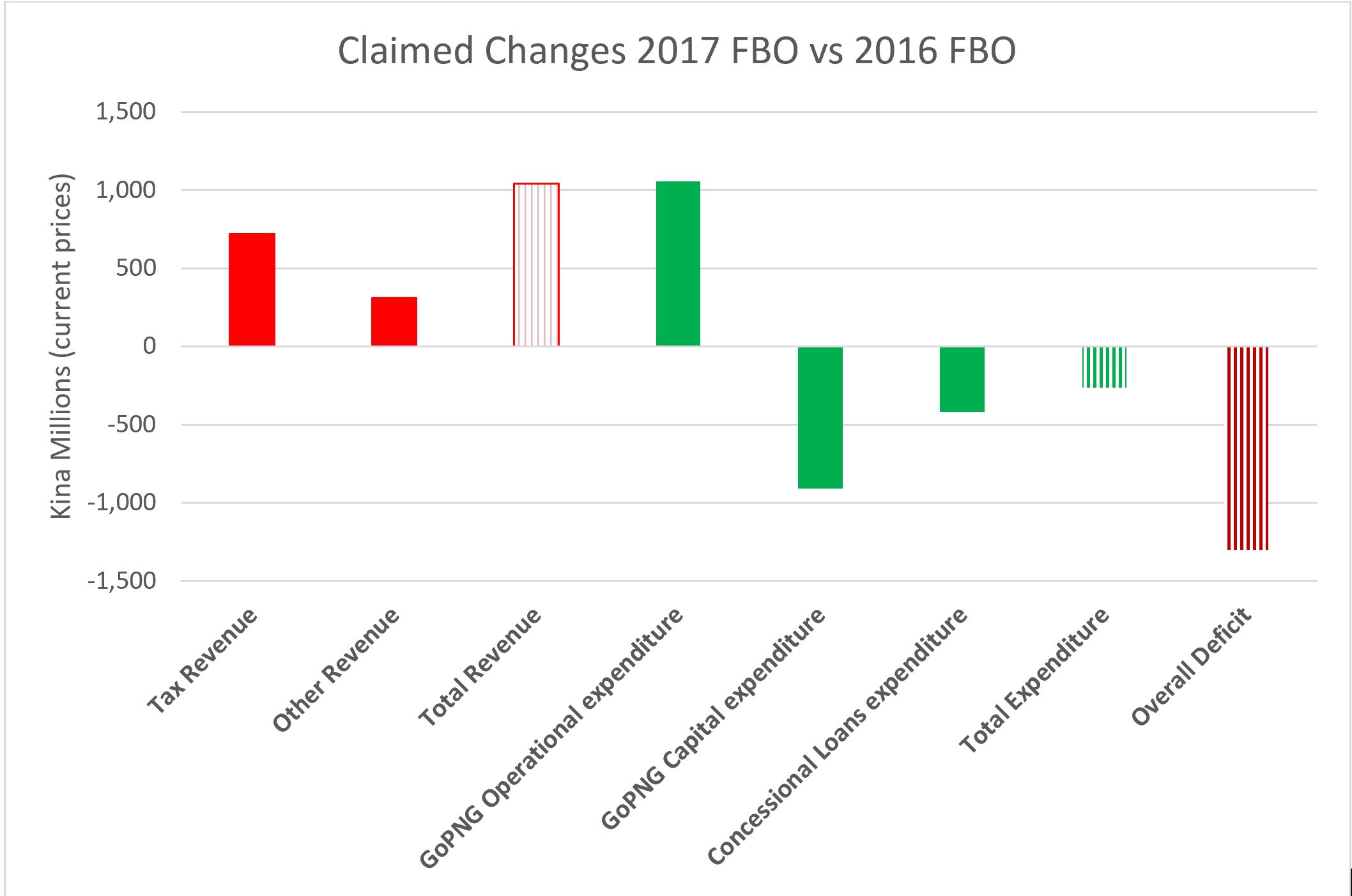 All of this revenue increase has been absorbed by an increase in operational expenditure of K1,053m.

However, there have been reductions of K908m in capital expenditure and K418m in the use of concessional loan projects. These are both undesirable but “easy” ways to cut a budget.

These cuts in longer-term investments total K1,326m and fully explain the claimed fall in the budget deficit  by K1,302m.

Frankly, this is not the type of structural improvement one is looking for when lowering the deficit. Having all of the reduction based around capital expenditure is of concern as it lowers (assuming the funds where well spent on roads etc) PNG’s future growth potential.

Of particular concern is the cut in concessional loan expenditures of K418m. This is likely to be funding from sources such as the World Bank and Asian Development Bank. Such programs are cheap – interest rates of 2 to 4 per cent are much lower than the costs of borrowing on from PNG’s domestic finance markets (where rates are 8 per cent for one year Government Bonds and around 12 per cent for longer-term Treasury Inscribed Stock) or any possible Sovereign Bond. They are also programs that have generally gone through strong and transparent project design and contracting methods.

This appears a sub-optimal policy. This is the type of financing sources that PNG should be seeking to increase rather than cut as they did in 2017. It was important to reduce the historically high budget deficits of recent years. However, doing this by slashing infrastructure programs and giving up concessional loans is difficult to explain.

The next blog will examine in closer detail why government expenditure (or at least build-up in liabilities) is likely to be considerably greater than claimed by the FBO. The following blog will then examine why revenues are also likely to be lower. The fourth and final blog examining the FBO will then assess the likely actual outcome for budget policy in 2017. For those not wanting to wait to read through to the end of the book, the conservative estimate is that the 2017 deficit is at least K1 billion greater than claimed by the 2017 FBO, with an upper estimate of a K2 billion understatement of the size of the budget deficit.