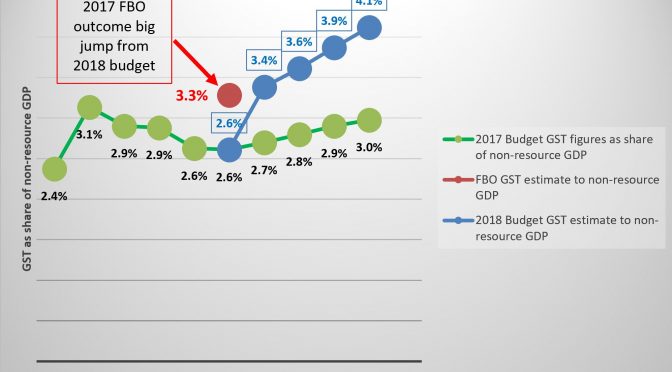 This is the third blog examining the 2017 Final Budget Outcome (FBO) report released by Treasurer Abel. This blog examines the claimed revenue side of the 2017 budget. Overall, there is a likely overestimate of revenue in 2017 of K350m – and possibly up to K550m.

The 2017 Final Budget Outcome (FBO) claims domestic revenue has increased by K1bn relative to the 2016 budget, and matched the expectations of the 2017 Supplementary Budget. The big change was an increase in taxes on goods and services of K0.7bn, especially GST collections with a claimed increase of K0.4bn.

Unpacking these figures leads to some significant questions about the honesty of the FBO, especially on the GST side.

The best estimate of the underpayment of GST refunds is K350m – and such underpayments leads to the budget deficit being artificially lowered. A conservative estimate would be K250m. This is in addition to the K200m to K270m not transferred to the Provinces and likely held in the GST trust account until at least 1 January 2018 (mentioned in the previous blog).

The dividends figure is still subject to the concerns of previous dividend payments, especially from Kumul Petroleum from the PNG LNG equity. In 2016, the last available independent verification of these payments, the actual dividend was K100m not the K300m claimed in budget documents. This is because most of the dividends from Kumul Petroleum were simply “advances” according to the 2016 Extractive Industries Transparency Initiative report and confirmed by PNG Treasury. It is unclear when the previous “advances” will be repaid. Until there is a release of updated financial accounts (which were promised to be released by June 2018 under the 100 Day Plan), such dividend payments will hang under a trust cloud – so a likely false claim of K200m (in line with 2016 known data) and a conservative estimate of K100m.

First, why are there doubts about the large increase in GST revenues? GST is strongly connected to the health of the economy – especially sales. Reports from the business sector is that sales were flat in 2017, although there was an increase in imports. So does the jump in GST collections of K0.4 billion make economic sense?

The best figure for the GST tax base in PNG is non-resource GDP (as the resource sector is export-focused, it is generally exempt from GST). The following graph shows GST taxes (both to the national and provincial governments after refunds) as a share of non-resource GDP. 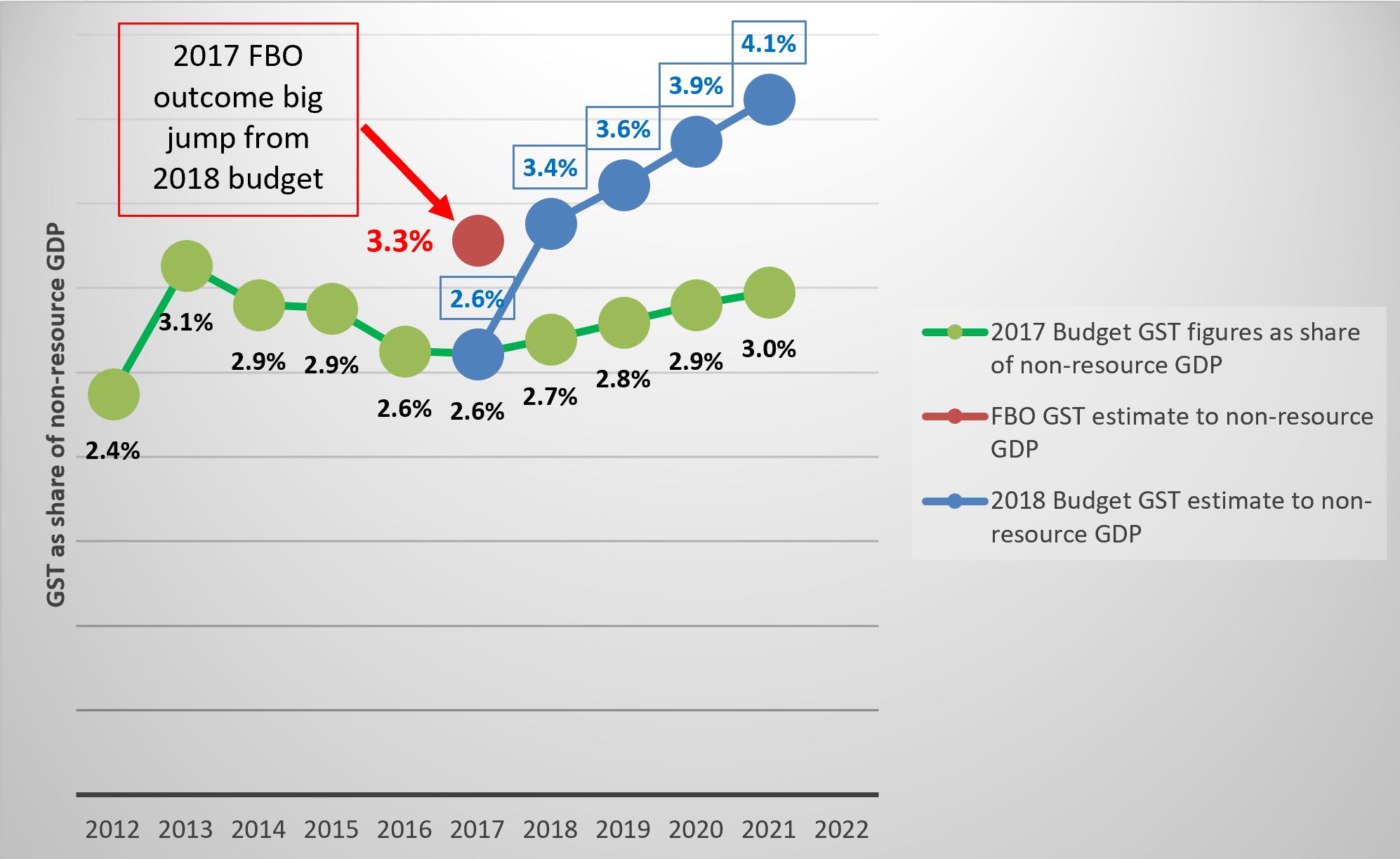 The green line indicates expected collections according to the 2017 budget. The expectation was that 2017 GST taxes would remain the same as a share of non-resource GDP at 2.6%, and then start increasing slowly over the next five years due to better administration, to reach 3% by 2022. The 2018 Budget included much more ambitious targets for GST collections – essentially expecting a 25% jump above the estimates from just a year before – shown by the blue line. This 25% jump was expected from 2018 –  a very short time-frame for lifting the whole process of better enforcement including business registrations. This was always going to be an unlikely jump as such changes usually build-up over years (still vital to do, but sequencing and timing matters). However, according to the 2017 FBO, this extraordinary 25% jump was able to occur between the 2018 budget delivered in November 2017 and 31 December 2017. This is shown by the red dot, with GST collections jumping from the 2017 2.6% figure included in the 2018 Budget to 3.3% included in the 2017 FBO.

Realistically, the only way for such a very large change to be possible in the last two months of the year is to play the game of deferring GST refunds. Tax compliance is possibly improving, but this is a slow process and had already received increased funding in previous years. Underlying economic health also did not suddenly improve – indeed, indications are that the economy was not doing well in 2017 such as the 3.4% fall in private sector credit.

The GST refunds game in 2017 requires working through a real puzzle. The complexity reflects the several components of GST and what appears to be a potentially new arrangement in 2017 that companies could reduce their company tax payments by directly claiming overdue GST refunds (an important cash management issue for many businesses). So patience is required in understanding the following detailed analysis!

The level of GST refunds is very large, so even minor games and delays can have significant impacts on budget bottom lines. Specifically, a large portion of GST collections need to be refunded – about 68% of net collections according to the Sir Nagora Bogan tax review (page 23 of its GST discussion paper at http://taxreview.gov.pg/wp-content/uploads/2015/09/15.09.17_issues.paper_.9_goods.services.tax_.pdf). 68% of net collections is just another way of saying refunds total some 40% of gross GST collections (so 1 – 1/1.68).

Let us run through a simplified example of how the GST system could have worked in 2017 based on ballpark figures contained in the FBO. On balance, the judgement is that this is the likely way the 2017 GST story unfolded.

Total GST collections could have amounted to K2.5bn – K1.25bn in collections from imported goods and services (ports collections are usually a bit over half of GST collections) and K1.25bn from sales within PNG (in-land collections). GST refunds would be expected of about K1 bn (40% of gross collections), leaving GST of K1.5bn (so K350m less than the FBO reported outcome). Of this total, the national government would receive all the ports collection share (so about K0.75bn). The provinces are due to receive 60% of land collections but this is lagged by two years so their 2017 payments are actually based on 2015 figures. Earlier budget papers indicate they are entitled to around K0.4bn in 2017, leaving the remainder of K0.35bn to the National Government. The national government would then receive a net K1.1bn (K0.75bn+K0.35bn).

The easiest way to increase GST receipts, especially at the national level, is to delay GST refunds. For example, a delay of GST refunds of K0.3 bn would flow entirely to the National Government in 2017, with some of this gain paid two years later to the provinces. In this context, some of the language of the 2018 budget is interesting – “up to end-October 2017 ….. actual refunds continued to remain low at below K200 million …. ” (page 28). Looking at relevant tables, the actual figure for refunds was K148m. This is a very low level relative to usual refund levels identified by the Bogan Tax Review – on 2016 collection levels, refunds of around K0.8 billion would have been expected by end-October – so about K0.65 billion less in GST refunds than expected.

Adding further complexity to this analysis is that companies could start claiming over-due GST refunds in 2017 – presumably an action by PNG’s Internal Revenue Commission to help with the cash flows of certain companies owed significant and over-due GST refunds. The 2018 budget stated “However, subsequent to the Supplementary Budget, revenue trends have continued to deteriorate particularly with further falls in company tax collections of around K351.4 million are now anticipated, although the GST offset impact is likely to mean that GST receipts will be higher by around K249.0 million.” (page 28).

This implies some K249m in GST refunds were being realised through the reductions in company taxes (and this should be offset through an increase in net GST collections as the GST refunds now appear as reduced company tax rather than reduced GST revenue). However, this does not clarify the level of previously outstanding GST refunds (possibly from 2016) or how much of the earlier K290m reduction in the Supplementary Budget estimate for company taxes was explained by GST refunds.

What does this all mean? The 2018 Budget figure of GST refunds being K0.65bn lower by end-October 2017 is a massive variation from the usual expected level of refunds. As company tax did fall by the K350m expected in the 2018 budget, it is reasonable to accept the PNG Treasury estimate that K250m of this was due to GST refunds (so 70%). In addition, the fall in company tax revenues between the 2017 Budget and the 2017 Supplementary Budget of K290m could also be 70% due to GST refunds – so say a further K200m (probably a very conservative assumption in the context of determining GST refund deferrals – it is not clear when GST offsets started being allowed in 2017 and most company tax revenues are later in the year). In total, allowing the K148m in refunds by mid-October to grow to K200m by the end of the year, and allowing a very high estimate of K450m in GST refund offsets through company tax, then total GST refunds in 2017 could have totalled around K650m. This is about K350m less than the usual pattern of GST refunds of K1bn mentioned by the Sir Nagora Tax Review.

Conveniently, if this was indeed the case, and K350m in GST refunds have been deferred until 2018 or later, then the level of GST collections increases from K1.5bn in the above example to K1.85bn – in line with the FBO outcome. This would explain most of the sudden jump in the above graph.

GST refund deferrals of K350m in 2017 fit very conveniently with the actual outcome. Being conservative, possibly these deferrals were only K250m. If gross GST collections were not doing well, reflecting continuing problems in the underlying economy, then the GST refund deferrals could have been considerably larger.

Future budget documents should be explicit about the level of GST refunds paid each year, as well as outstanding amounts. Such under-payments are almost identical to an expenditure arrear – a legally required payment that is deferred largely to suit the government’s cash flow position and rosy coloured budget reporting. Prior to introducing a more complete accrual budget reporting system, the budget should include explicit figures around GST refund levels and expenditure arrear levels to improve budget transparency.

A feature of recent budgets has been the significant increase in expected dividends from statutory authorities. In previous years, there is growing evidence that some previously claimed “dividends” were not paid from profits and some payments were essentially loans. The clearest example is from Kumul Petroleum. In 2016, the last available independent verification of these payments, the actual dividend was K100m not the K300m (still) claimed in budget documents. This is because most of the dividends from Kumul Petroleum were simply “advances” according to the Extractive Industries Transparency Initiative report and confirmed by PNG Treasury. It is unclear when the previous “advances” will be repaid. Until there is a release of updated accounts, such dividend payments will hang under a trust cloud. In addition, the pressure on dividend payments from SOEs has been quite unrealistic in recent years, with reports that some SOEs are simply having to borrow funds to pay dividends. There is an urgent need to improve such transparency.

Point 19 of the government’s “100 Day Plan” states “Audited accounts for SOEs and Statutory Authorities for the last financial year to be produced and tabled in Parliament by June 2018”. Clearly, this timetable was not met, and raises further doubts about whether figures in budget documents can be trusted. Having these audited reports for 2017 could have removed this final element of doubt about the 2017 FBO. The O’Neill government is punishing itself with a lack of transparency.

The next article will bring together the analysis covering the “aggregate” view, as well as expenditure and revenue, to assess the likely real bottom line in the 2017 budget.