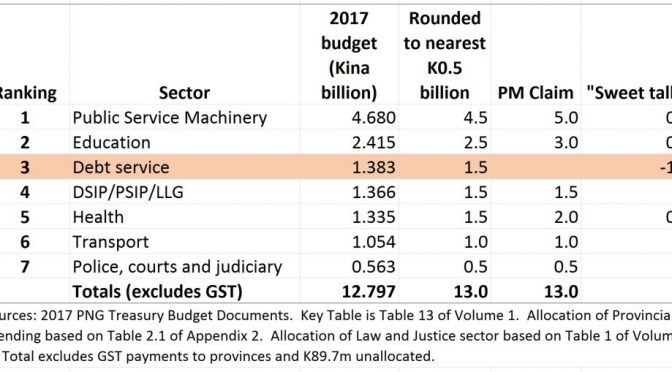 Prime Minister O’Neill has undermined his own calls for honesty in the election when describing the national budget (see Post Courier Top Stories 16 June 2017 here as well as on his own press site here).

In describing the K13 billion national budget to an election crowd in Popondetta, he appears to have deliberately covered up the third largest item of government expenditure – escalating debt interest payments.

These debt interest payments of K1.5 billion now account for over one-tenth of the entire budget.

Comparing the 2013 budget to the 2017 budget (both K13 billion in nominal terms), the biggest change is that debt interest costs have gone up by K1 billion, and transport funding has been slashed from K2 billion down to K1 billion.

Free healthcare was only ever provided 3% of the health budget (K20m) – no where near enough to cover the real costs of free health. And even this has been cut by 20% in real terms since its announcement.

As the Prime Minister says, the people should “not be fooled by desperate candidates misleading them with sweet talk”.

The Post Courier on Friday 16 June had a top story titled “Election Not A Time to Play Politics: O’Neill”.  The Prime Minister’s own website had an even stronger headline of “PM O’Neill highlights transparency in national budget allocation – warns people not to be mislead by ‘sweet talk’ and lies”.

Both sources indicate the Prime Minister stated “the budget allocation is very straight forward and people need to understand the facts”.

He then outlined the break-up of the K13 billion budget into broad expenditure categories, rounding to the nearest K0.5 billion.

However, when comparing the Prime Minister’s figures to those contained in the 2017 Budget papers, there are some significant differences.

The largest of these is that no mention is made of debt interest costs which total an estimated K1,382.9m in the 2017 budget.  This debt interest cost figure is an underestimate as the 2016 Final Budget Outcome confirms that the level of government debt at the end of 2016 (K21,944m) is already greater than the government assumed the debt level would be at the end of 2017 (K21,623m).

Even with the understatement of debt interest costs in 2017, it still is the third largest category of government expenditure.

The following table is constructed from the 2017 budget documents.  The key table is titled “2017 Expenditure by Sector” – see here for document and go to page 39 Table 13).

Some details on the methodology at the end of the post.  A copy of the full spreadsheet showing all the links to relevant parts of the budget can be obtained by emailing admin@pngeconomics.org.

It is interesting to compare the broad structure of the 2017 budget using the expenditure categories of the Prime Minister with those of the 2013 budget.  The K13 billion 2013 budget was of a very similar size to the 2017 budget in nominal terms (so before accounting for the impact of inflation). It was also the first budget released after the Prime Minister was elected in mid-2012.  The budget included the new Alotau priorities of a dramatic increase in funding to districts, provinces and LLGs as well as the introduction of the free health care platform.

However, if this is put into real terms or 2013 prices (to allow for the fact that inflation between 2013 and 2017 means that every 100 toea now is equivalent to only 80 toea in 2013 terms), then the 2017 budget shows major real cuts of over one-fifth (or 20 per cent) in almost all areas of expenditure. There are two big exceptions to this general pattern of cuts. The first is the major increase in debt service costs of 63% in real terms – so nearly two-thirds greater. The second exception is the massive real cut in transport expenditure of 59%. No wonder the highlands highway is suffering!

However, the budget documents indicate that the free healthcare policy was only ever allocated K20 million (see Table 18 p51 of the 2013 budget with the line “Free Primary Health Care K20.0m). The 2017 budget also makes clear the free healthcare policy is only allocated K20m – page 44 of Vol 1 of the 2017 budget states: “The Capital component of K351.6 million includes K20.0 million fixed support for the Free Primary Health Care Service policy.”  This is only around 3% of the total health budget. This was never enough to really implement free healthcare. And even then, by holding it at the same Kina level, its actual value has fallen by 20 per cent in line with inflation.

Massive cuts have been made to the health budget in real terms (15% from the 2013 budget, and 30% from the 2015 budget), while only this small slice of K20 million has been protected.

Funding for tuition fee free education did receive a serious increase in budget funding by the O’Neill government.

In real terms, support for free education has been cut by 30 per cent.

And of course, most of these funds no longer flow to schools directly as they did in the first year of payments.

The Prime Minister uses some different sector categories than those used in Table 13 of Volume 1 of the 2017 budget.  The large expenditure on Provinces also needs to be broken up between education (mainly teachers salaries paid to provinces), health (including the functional health grant), the PSIP/DSIP/LLG funding which the PM separately identifies, tax transfers to the provinces through the GST and Bookmakers Tax of K463m – which is not included in the total as it is not broken up by sector – and other functional grants. There is also a need to separate police, courts and judiciary expenditure out from the more usual “law and justice description”.  All sectors other than those specifically mentioned by the Prime Minister are aggregated into the category “public service machinery”, including the residual from the “law and justice” sector not included in the sub-category of police, courts and judiciary – these items are mainly the defence force costs and Attorney Generals.