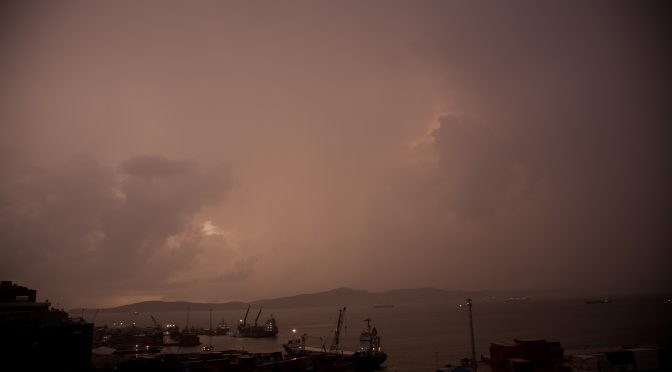 The threatened debt crisis results from the extra-ordinary increase in Public Debt Charges during the O’Neill government. 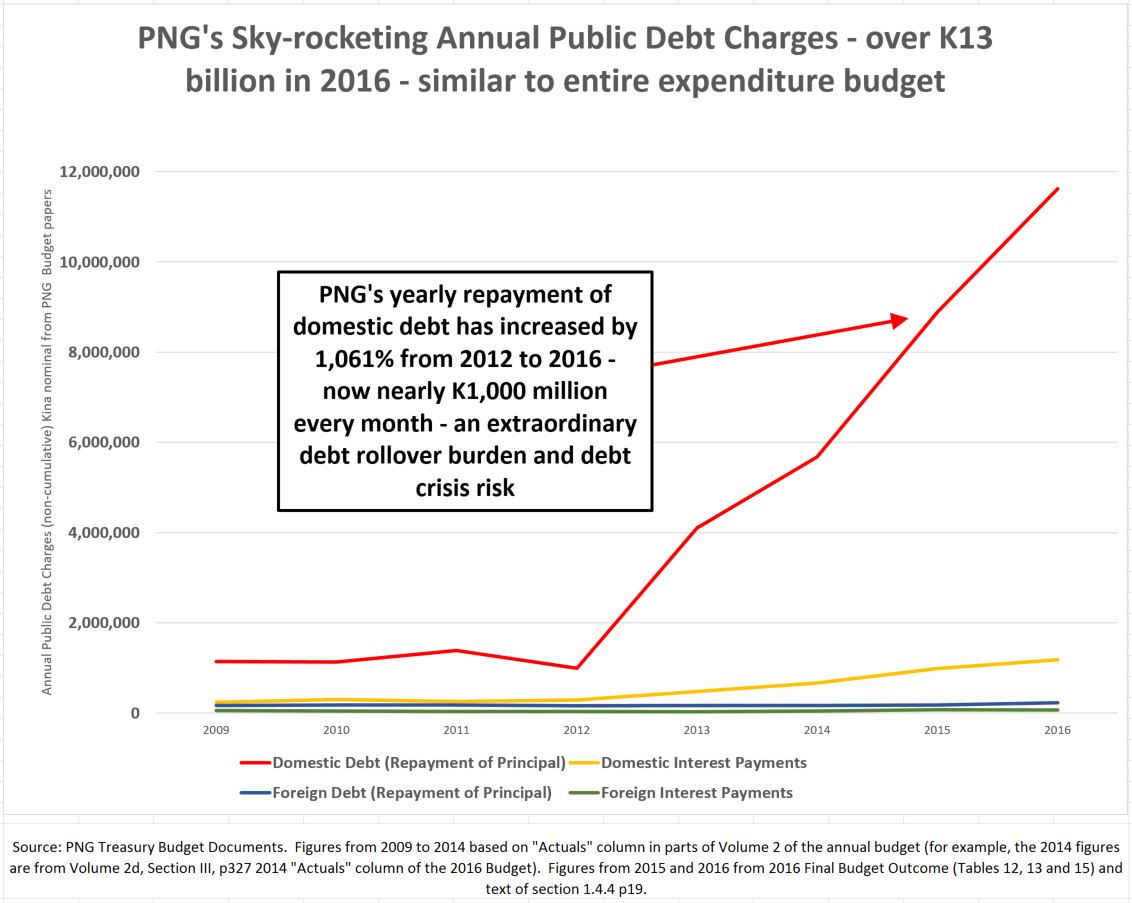 Almost all of this extraordinary increase comes from an explosion in repayments of domestic debt.  These repayments have increased by over one thousand per cent from 2012 to 2016.  Every single month, the PNG Treasury, through BPNG, needs to raise nearly K1 billion just to keep debt rolling over.

PNG’s debt crisis risk is this enormous monthly debt rollover burden. If there is a loss of confidence, then the crunch point could come very quickly.

Debt crises are rarely about failure  to repay an interest bill or just because of some very high debt to GDP ratio.  They come when a principal payment cannot be made – when debt cannot be rolled over and there is a debt default. This applies to the private sector or governments. And with a looming debt default, governments usually have to turn to the IMF (the cheap option with conditions), other international financing (expensive with fewer conditions), or start printing money very quickly (high inflationary risks and a slippery slope).

And the O’Neill government has now massively increased the monthly rollover burden and made PNG very vulnerable to a debt crisis.

There are other falling debt indicators under the O’Neill government which are also sounding loud warning bells (figures in table below):

The PM is correct in that PNG’s debt to GDP ratio is not high relative to other countries, but this ignores two critical issues which any true leader would consider:

The above graph showing the explosion in domestic debt repayments is a very worrying development. It reflects a decline in market confidence in the government (with the quantum shift to shorter term maturities). It also reflects PNG’s poor economic management over the last five years on debt, the budget, the exchange rate and sustainable growth policies.

For the sake of their children, electors should listen carefully to these warning bells of sky-rocketing debt crisis risks.

One element of the O’Neill government’s economic mismanagement has been the rapid escalation in debt. This has been driven by the largest budget deficits of any government in PNG’s history.

The latest Treasury budget document (the 2016 FBO) indicated these deficits are growing once again (back to over K3 billion). The 2017 budget played some tricks to try and hide how bad things were – see here with Tok Pisin translation here.  On debt, the 2017 budget forecasts have already been shown to be fraudulent with debt levels at the end of 2016 already exceeding the expected outcome for 2017 – see here.

One key element of debt mismanagement has not received much comment. This is the extraordinary increase in overall public debt charges.

There is some confusion about these public debt charges, especially principal repayments.

But there remains confusion – see here for an excellent explanation by an aspiring woman leader – Ms Kessy B. Sawang.  Although debt repayments are included in the formal budget appropriation bills that should be passed by Parliament, they are not included in the annual budget.

Such treatment is appropriate and aligns with international standards.  Debt interest payments are an annual charge on loans and represent budget expenditure. Debt principal repayments are a financing item.

However, in addition to the rapid increase in public debt levels, PNG’s debt financing has moved dramatically towards very short-term debt maturities. Outstanding short-term Treasury Bills are now greater longer-term Treasury Bonds of (K8.7 billion vs K7.8 billion in the 2016 FBO).  But even this does not show the dramatic move to even shorter loan terms in Treasury Bills. These are now often issued for only 3 months – requiring them to be paid out and re-borrowed several times every year.

Treasury acknowledges this shift by noting the “increase in the frequency of refinancing or roll-over of Treasury Bills whose maturities are six months or less throughout 2016.” (2016 FBO page 16).  Indeed, in the 2017 budget, the Treasury described there being a “quantum shift by the major investors away from
longer tenors of 182 days and 364 days to shorter tenors of 28, 63 and 91 days” (page 53).

To make “space” for these shorter term loans, the central bank has had to reduce its own monetary policy controls through the issuance of Central Bank Bills. There was the expectation that the level of short-term Treasury Bills would reduce later in 2016.  However, BPNG’s most recent Monthly Economic Bulletin, when explaining the major expansion in PNG’s monetary base of nearly 20 per cent over the last year, states “This was mainly due to significant retirement of CBBs by the Central Bank in December 2016”.  There was no monetary policy justification for such a change. The central bank is getting out of short-term debt for monetary policy management to allow the PNG government to finance its budget deficits and growing debt rollover requirements.

And this move towards shorter-term debt has put PNG on a dangerous treadmill.  Debt  is having to be rolled over much more often.  Most of the K1 billion required in financing every month is just to rollover existing debt – needing to borrow again just to pay off last month’s borrowing. In itself, this is a reflection of declining confidence in the government.

And if this confidence declines enough, and even one bank or superannuation fund decides they would rather keep the cash rather than take the risk in lending money to the government again, then a financing cash crisis can occur with surprising speed.

The experience of debt crises in the past is that there can be warning signs, but when they happen, they can happen very quickly.

PNG electors need to listen to the warning bells.