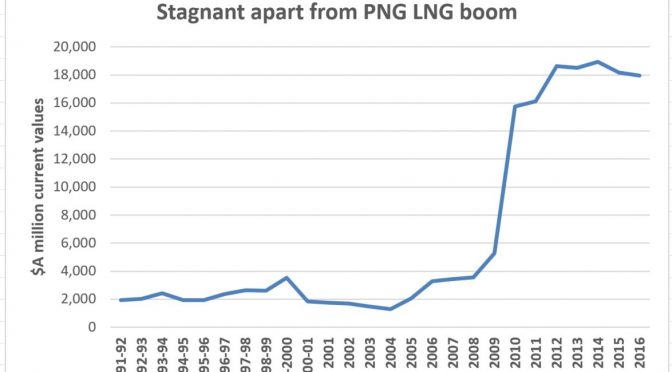 Following are three key questions which potential investors should be seeking answers for at the PNG Investment Conference being held in Sydney on 7 and 8 September.

First, what are my peers doing?

While a good business investor will be open to finding a niche market with great potential, it is relevant to know what their investment peers are doing.

There was a rather disingenuous Bloomberg article last week titled “Australia Would Rather Invest in Papua New Guinea Than in China” – see here. A more comprehensive set of figures, based on total Australian investment in these countries is shown in the graph below. 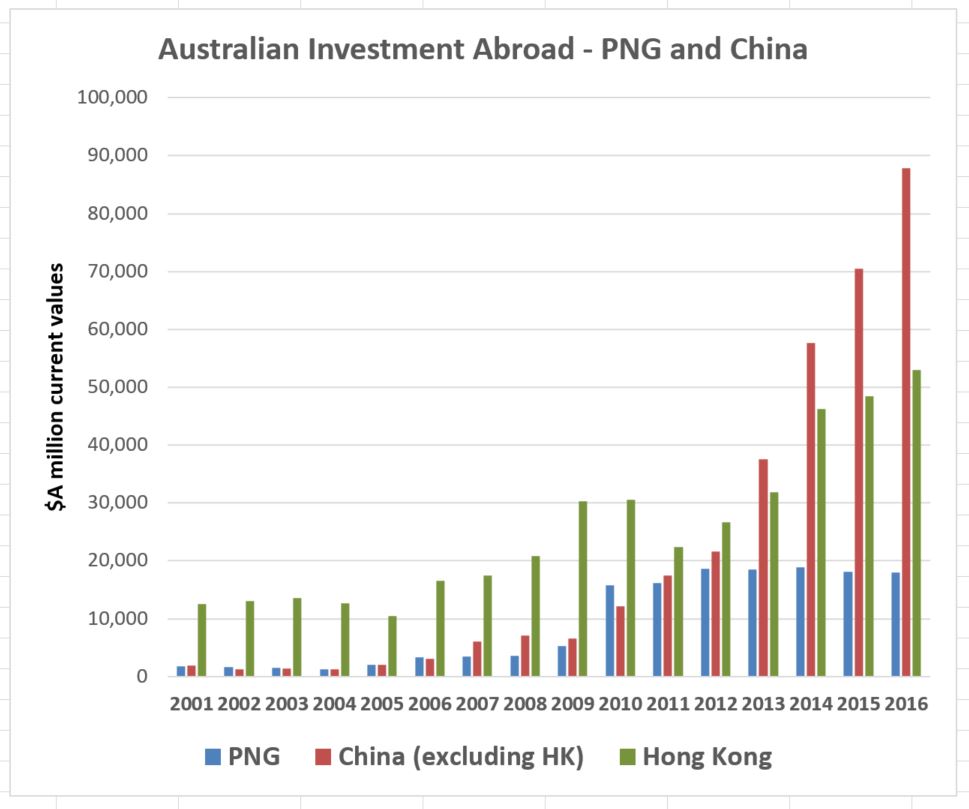 Three key elements.  First, one should consider more than just direct investment.  This dominates the PNG picture, but is a much, much smaller element than in China where investment options are much more diversified. Second, investments in Hong Kong are also relevant to the comparison. Third, there are very strong patterns of continuing growth of Australian investment into China and Hong Kong from 2012 but little into PNG.

Unpacking the last element a bit more, following is a 25 year history of Australian investment in PNG. 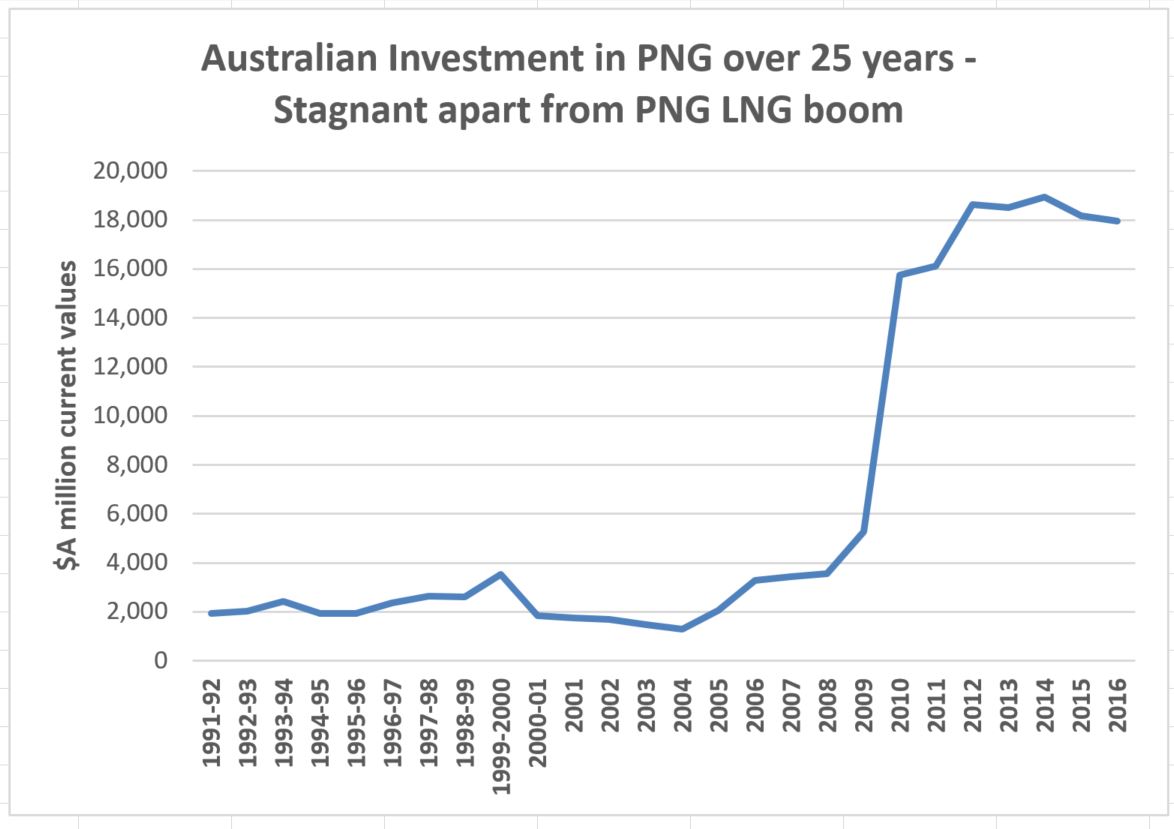 The striking features of this graph are: how flat the investment pattern was from 1991 to 2008; then the extraordinary increase around the PNG LNG project; and then how flat it has been since.  Indeed, it was hoped the transformative PNG LNG project may encourage more on-going investment into PNG – but money has actually started flowing the other way. Australians are currently dis-investing in PNG.

This issue goes to the heart of investor/business confidence. It would be good for conference attendees to talk to some of the long-term operators in PNG as to why funds are being withdrawn and the possibilities for turning it around.

Second, if I put my money in, can I get it out?

This is a reasonable concern for possible business investors. The conference will make it clear that probably the major concern facing PNG businesses currently is foreign exchange restrictions.

These restrictions are creating immediate difficulties in getting enough foreign exchange to pay invoices. There are various arbitrage options for some types of business (especially those with a significant export element to their operations) but these restrictions have really hurt most businesses. Domestic growth has been squeezed as imports have dropped back to 2006 levels.

In addition to this short-term concern about paying invoices for businesses, it would be good to talk to local operators about their experiences in repatriating any capital (such as paying dividends, withdrawing superannuation or selling one’s business assets and withdrawing funds).

Frankly, these foreign exchange shortages reflect poor policy decision-making (formally by the central bank although there are reports of key inputs/directions through the Prime Minister’s Office advisors).

PNG has moved away from the market based exchange rate it adopted after an economic crisis in 1994. It has now effectively pegged its currency to the US dollar. Simply putting an extra $US100 million into the market (part of the government’s 100 day economic plan – see here) is a band-aid response that doesn’t deal with the underlying issues.

This question of repatriation of capital goes to the heart of PNG’s management of its foreign exchange arrangements. Estimates from the IMF and other source such as the ANU suggest the Kina should fall by at least 20%.  A move to a more competitive exchange rate would make foreign investment more attractive and thus could influence the timing of investment decisions.  Still, much can be done now to start exploring ideas and building relationships.

Third, is this new government pro-business other than in the resource sector?

When considering business opportunities, it will be important to get a sense of the government’s priorities.  There are concerns that PNG is taking an even more state-based approach to development than the previous government.  As stated in my analysis of the government’s major new policy document, the Alotau 2 Accord – see here – “There is no clear political or economic philosophy for meetings its claimed objectives of more inclusive growth.  There are no assurances that the anti-growth, anti-business elements in planned policies such as agriculture, SMEs and land will be dropped. There is no mention of private-public partnerships. There is a worrying amount of state-based action in the accord and very little about facilitating the private sector with pro-market policies.”

The new Treasurer’s 100 day economic plan has at least suspended and put under review the worst planned anti-business proposals. But its discussion on “Strengthening Our Economic Base” starts with a list of well known resource prospects, then some Australian aid projects (!), then power project prospects that have been around for years followed by some previously announced “high impact projects” (submarine cable, PMIZ). There are no initiatives to try and reduce red tape and improve business regulation to provide a better environment for SMEs. The development path remains focused on resource projects and other ‘big project’ ideas that seem to do well for proponents but not for inclusive growth for other businesses and the people of PNG more broadly.

I hope the conference goes well. Some of the panels in particular look excellent and filled with local practical knowledge. The addition of the Pacific session is also a good initiative. I’ll be exploring views on answers to the above questions from old and hopefully new hands during the conference.

Mainly though, it will be great to have a chance to talk again to people living the wonderful PNG experience. As Prime Minister O’Neill banned me from the country for asking questions such as the above two years ago, I miss these opportunities to talk to local people including my many friends still in PNG.