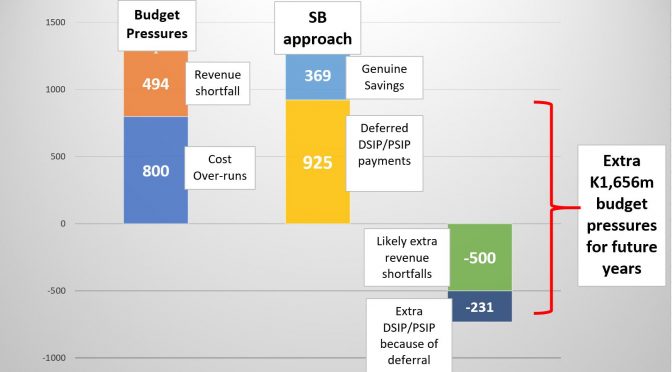 This is a very mixed document.

There are some very positive messages about medium-term paths for getting fiscal policy back on track. There has been a worthy attempt to target a more reasonable budget deficit of 2.5% of GDP in 2017 relative to the excessively high 4.6% of GDP in 2016. Some key expenditure priorities are being protected and there are some sensible cash-flow fix-ups (such as pharmaceutical drugs, office rentals and interest costs) and small initiatives (such as funding for the Coffee Berry Borer Disease response).

On the face of it, it appears that the government has started doing some of the hard yards required to get the budget back on track. There will be an expenditure reallocation of K800m to pay for cost over-runs, and a further cut in expenditure of K494m – a total of K1,294m. Given the original 2017 budget had total expenditure at K12,008m (excluding donor grants), this is a domestic expenditure saving effort late in the year of 10.8%. This is an extraordinary effort.

A worrying silence on claimed savings

However, there is actually significant doubts about the true nature of the “savings”. The Supplementary Budget includes massive cash reductions to the various Support Improvement Programs (SIPs) of 75% to 100% (with savings of K692.8m from DISP, K168m from PSIP and K64.42m from the WSIP – a total of K925.22m).

So 71.5% of the total “savings” in this budget (K925m divided by K1,294m) are for the various Support Improvement Programs. There is no mention of this anywhere in the Treasurer’s 14 page speech. This is deeply disturbing.

The silence on these major cuts is particularly problematic given that the Prime Minister declared from New York that these programs would not be cut. What is actually happening?

One thing that was discussed in Parliament the day before the Supplementary Budget was a statement from the Prime Minister that DSIP funds would only be paid to new Parliamentarians. There are over 50 new Parliamentarians. This would imply a need for at least K500m – but the funding available has been reduced to only K173.2m. This is a long way from the understanding (see below) that the deferrals would be spread evenly across all politicians.

The reduction in the DSIP and PSIP funds, ironically, provides an enormously powerful lever for the Prime Minister to build the numbers in the government. He can now argue that there are not enough funds to pay all of the DSIP or PSIP allocations and be extremely selective who gets paid.

One way for the Parliament to limit the Prime Minister’s power (at least in the law) would be for Parliament to amend the suggested revised budget appropriations to provide SIP appropriations by each electorate and province. This would remove the discretion of political gaming and help protect all the people of PNG.

With such a major game being played on something supposed to deliver over 70% of the so-called savings, the Supplementary Budget inevitability loses some credibility.

There is a likelihood that the deficit will be significantly larger due to revenue shortfalls. While expected revenues have been reduced by K494m, there is still the unrealistic expectation of K850m in dividends.

Kumul Petroleum is still expected to pay a dividend of K350m – not very likely after the large losses it suffered on the foolish Oil Search transaction. Statutory Authorities, many of which are facing cash flow problems including from non-payment of government utility bills, are also still expected to pay dividends of K375m. These numbers just don’t seem credible.

On average over the last 3 years, revenues have fallen some K1,800m each year short of the budget prediction for that year. Based on past experience of excess optimism on revenue collections, the excessive level of dividends still in the budget, and probably some remaining excess optimism on company tax collections, I’d expect actual revenue outcomes to be down by well over another K500m on MYEFO forecasts.

The discussions with Provincial Governors had indicated that the reductions in the various Support Improvement Programs were really just deferrals of expenditure – the balances from the original amounts would be paid in equal instalments from 2018 to 2021. The Treasurer’s proposal was that a DISP allocation may be reduced from K10m to K2m in 2017, but from 2018 to 2012 district parliamentarians would receive K12m (K10m base level each year plus K2m deferred in Supplementary Budget). Clearly, this creates cash savings in 2017 but just pushes the problem out to future budgets.

The deferral makes the task of returning to a balanced budget more difficult as expenditure cuts or revenue increases have to be found in other areas.

This is not actually a fundamental savings measure (certainly from an accrual budget perspective). Rather, it is just a way to handle a cash crisis. Probably better than alternatives such as not paying private contractors for work completed, but it does nothing to deal with PNG’s underlying budget crisis.

The deferral of the DSIP/PSIP payments has built up forward expenditures by around K231m per year (the K925m deferral over 4 years).

The K925m deferral of the SIPs also just comes back into the 2018 base and these savings must be found somewhere else (unless the SIPs are deferred yet again, further building up future year budget pressures).

The expected greater revenue shortfall of at least K500m also would build back into the base.

Overall, there have only been on-going savings of K369m in this Supplementary Budget (K1,294 less K925m in SIP deferrals). There are budget pressures of K1,656m that roll into all future years (see graph below). 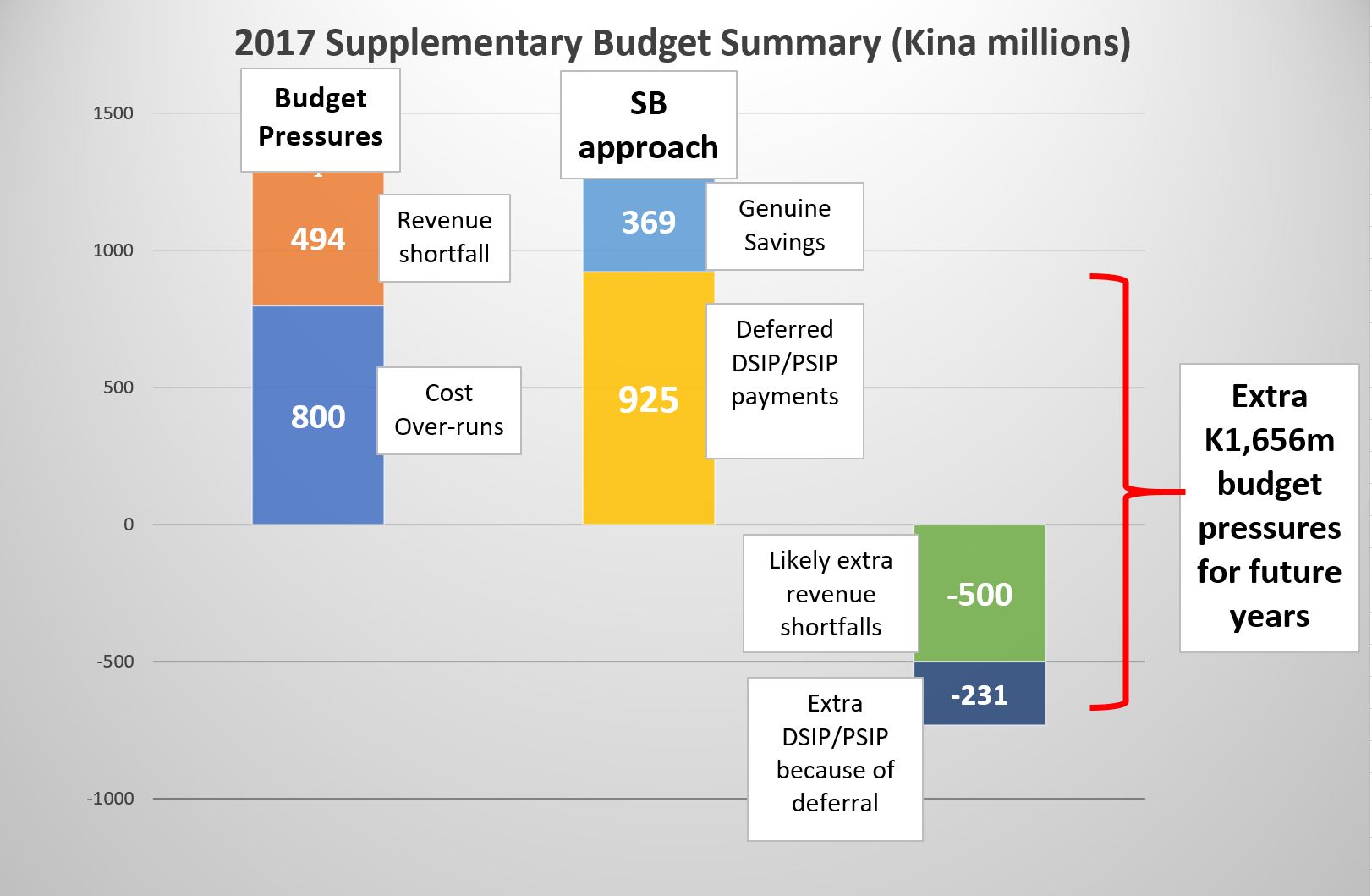 This highlights the level of challenges still ahead of PNG in getting its budget back into order. Changes of such magnitude would only seem possible with the help of friends – see here.

There are some real strengths in the 2017 Supplementary Budget. It demonstrates the declared intent to improve PNG’s budget crisis. As things are so bad, this cannot be a short-term fix. The medium-term planning for adjustment is welcome. Updates on the 100 day plan are welcome.

However, after going through the figures, the 2.5% deficit figure just does not seem credible. Even the IMF thought the best possible outcome was a bit over 3% for the deficit. This would certainly seem to be the case after allowing for likely significant additional revenue shortfalls.

However, the greatest hit to credibility in this budget is the total silence in the Treasurer’s speech on the actual treatment of the various Support Improvement Programs. These represent 71% of proposed savings, there appears to be a major disagreement with the Prime Minister on the programs, and clearly political power games are underway by the Prime Minister to get new members onto the government benches. However, the Supplementary Budget indicates that the cupboard is too bare for even these promises to be met (at least in 2017).

This moves the burden of proof of the government’s economic credibility to the 2018 budget. The people of PNG and international investors will look to the new Treasurer for better explanations and actions.

There is an easier and wiser course for PNG. If there is a chance that the new Treasurer can demonstrate to the international community that the government as a whole is willing to make the necessary adjustments, then there are prospects for many billions in additional funding to help ease the pain of adjustment.