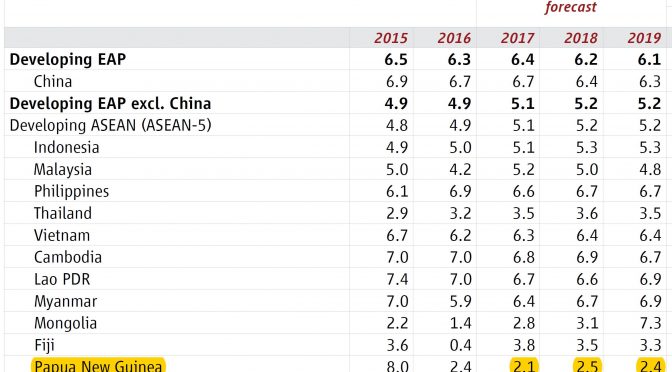 The World Bank recently released its update on economic prospects for countries in the East Asia and Pacific region – see here. This is the first of two parts analysing that report.

There was some very sad news for the people of PNG.

PNG, for every year from 2017 to 2019, is expected to have the worst economic performance in the region (see table below from p30 of the report– I’ve highlighted in yellow the growth figure for PNG which is the lowest in each of the columns). 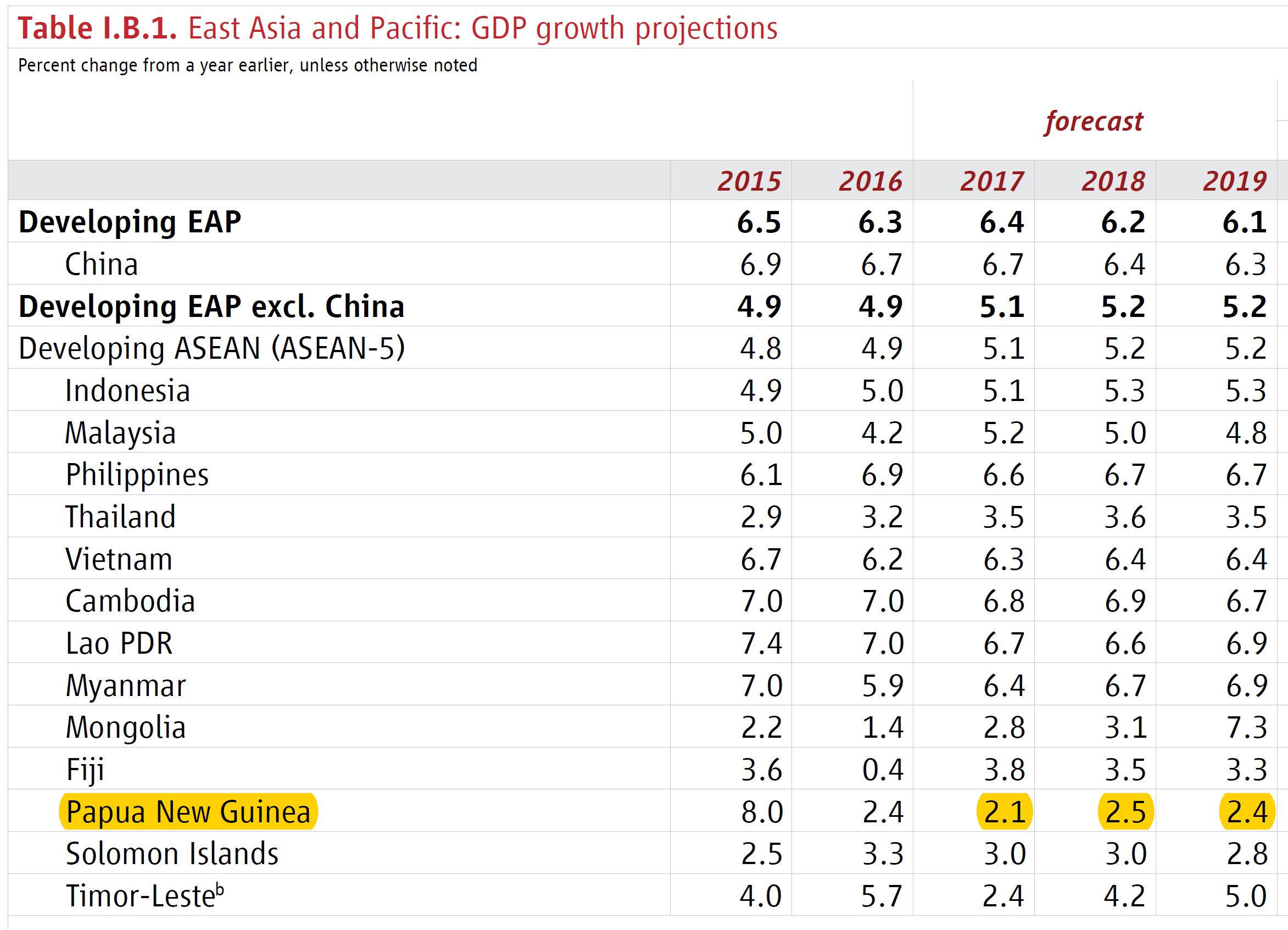 And with economic growth of 2.1 to 2.5% and population growth of 3%, it means that the economy is going backwards in per capita terms .

These major cuts in growth expectations come after the new O’Neill government has released its Alotau Accord II, its 100 day plan and the Supplementary Budget.

It is a very negative vote about those new policies.

PNG’s “moderate” growth rate in the non-resource sector is expected “due to the expected on-going shortage of FX (foreign exchange) and continued fiscal consolidation.”

In my next blog on the recent BPNG Monetary Policy Statement, I’ll explore further the extremely adverse impact of these foreign exchange restrictions (and how BPNG is trying to cover these up).

Ironically, when the engine of growth dies in an economy, so do inflationary pressures.  So inflation is now expected to drop to only 4.1% in 2017.  BPNG still expects 6.0%.

So after high rates of growth flowing from the PNG LNG project (PNG had the best growth rate in the region in 2015) there is no wind left to power the PNG economy.

PNG is much too resource dependent. It needs to diversity its economy, especially towards building on its agricultural potential which would provide much more inclusive growth.

Yet another outside umpire is extremely worried about the health of the PNG economy.

There is a need for a new direction in economic development policy. One suggestion for a way foward, based on analysis of the last 40 years, is here (and here for Tok Pisin version).

This people-centred version of development is not simply about doing more in agriculture or tourism. Doing things in these areas must be done in an inclusive way.

Current trade policy and sectoral policies suggest the government is looking after a few mates rather than truly being inclusive. Creating high import barrier wars just ends up hurting consumers.  PNG’s own experience with Ramu Sugar indicates this is a failed form of development.

In the long-term, that will harm growth prospects.

Charles Abel, the new Treasurer and Deputy Prime Minister, needs to be very careful about what advice he listens to in trying to find a real way forward for the people of PNG.

Hopefully, in five years, PNG will have the best performing growth figures in the region with that growth coming from areas other than mining and LNG.