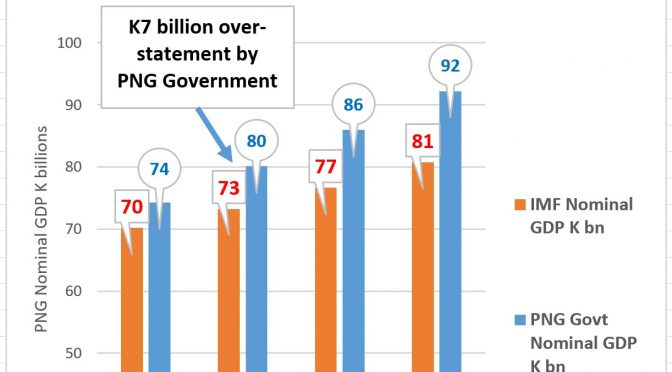 If you’re looking for a Happy start to the 2018 New Year, don’t read the depressing review of the PNG economy just released by the IMF.

The new Treasurer is to be congratulated for releasing this annual IMF assessment of the PNG economy. The attempts to bury last year’s report were hurting PNG’s credibility – see here. Transparency and openness are crucial first steps in addressing PNG’s difficult development challenges.

The IMF’s 2017 Article IV Review was written during the more optimistic days of August/September 2017 with Charles Abel becoming the new Treasurer, the promises of the 100 day plan and the positive early expenditure shifts in the 2017 Supplementary Budget. Economic policy has gone badly downhill since then as the influential advisers in the Prime Minister’s Office took over the 2018 Budget. The politics of holding together a fragile coalition took precedence over good development policy with major increases in expenditure driven primarily by the return to fully funded local constituency funds (some extra K1 billion) and meeting some of the costs of the foolish decision to host APEC later in 2018.

Contrary to Prime Minister O’Neill’s New Year message, there is no sign that PNG has turned a corner. Indeed, the IMF now confirms that there was a recession in the non-resource economy in 2015 (-1.2%). Since then, growth rates have been anaemic, and unfortunately the prospects are for little improvement. The Government estimates growth in the non-resource sector of the economy will move to 3.5% in 2018 – the IMF says a more realistic estimate is 2.1%. The Government says the growth rate will stay at 3.5% in 2019 – the IMF says it will be 1.9%. With an official population growth rate of 3.1% per annum, this means that the economy will continue on its backward path of falling incomes per person. Indeed, the latest IMF report makes a slight downward revision to the GDP growth forecasts in 2019 – confirming that PNG has the extraordinary distinction of being the worst forecast performing economy in East Asia for all three years from 2017 to 2019 – see here. 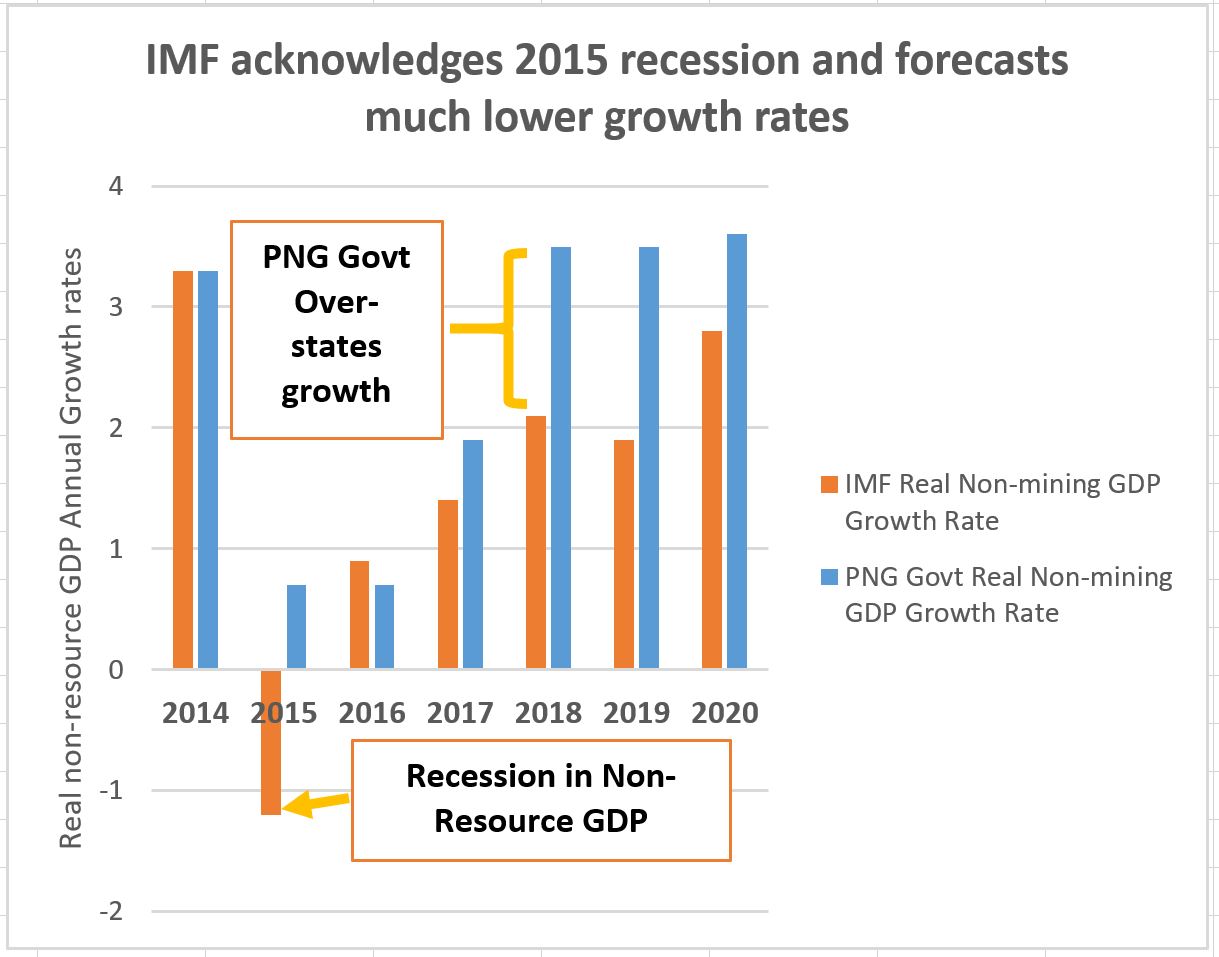 The clearest sign of the gulf between what the O’Neill government is promising and the best judgement of a relatively independent, international umpire is in estimates of the size of the economy in 2018. There is a K7 billion chasm between the government’s optimistic claims of a K80 billion economy in 2018 and the IMF’s estimate of K73 billion. This is an extraordinary difference in forecasts for such a key variable in 2018. This K7 billion gulf of expectations in 2018 continues to increase in future years so by 2020 the IMF’s estimates the economy will be K11 billion smaller than the PNG government’s forecasts. 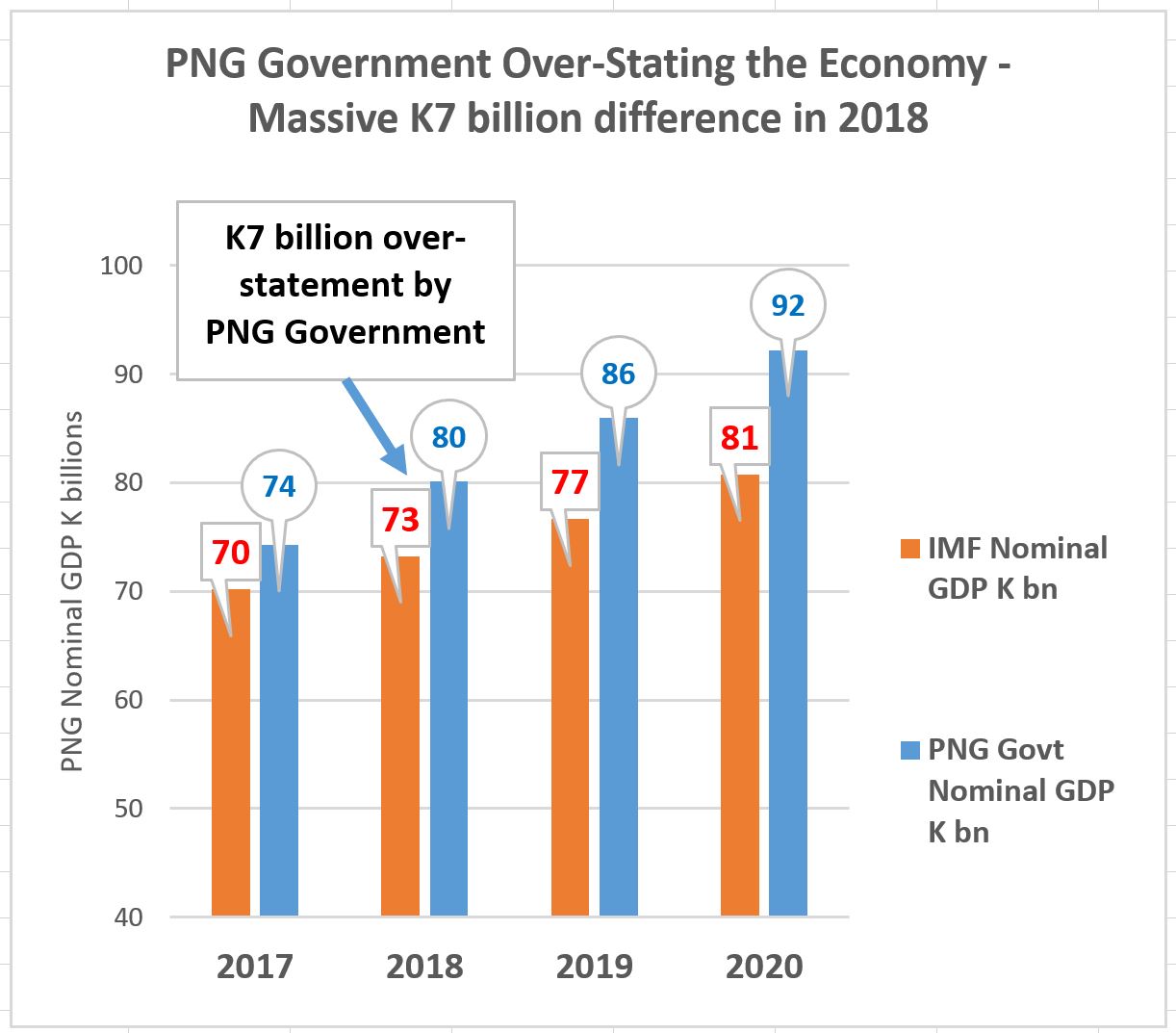 So why such a large difference? The major reason is the O’Neill government’s failure to recognise that its economic policies are seriously damaging growth in the economy. Specifically, the IMF states “The main impediment to private sector development is macroeconomic policies”. O’Neill was slow to respond to the fall in commodity prices. He denied the severity of the drought, and the failure to request any international assistance during this period may have cost up to 10,000 lives. He has failed to do enough to address foreign exchange shortages – indeed, there are reports that it was his key advisor that started his slippery slope downwards in 2014 with a foolish 17% appreciation of the Kina that pushed possibly another 130,000 people into absolute poverty – see here.  PNG government forecasts have moved to a business as usual estimate of 3.5% per cent growth per annum. However, it is not business as usual at all – foreign exchange shortages are damaging growth and business uncertainties are undermining investment. As the IMF notes, private sector credit growth is negative in real terms. PNG has not faced such dire economic mismanagement since the 1990s.

The IMF also considers PNG’s budget deficits will be larger than the official PNG forecasts. Specifically, rather than the 2.5% deficit to GDP ratios for 2017 and 2018, the IMF forecasts 3.2% and 3.1% respectively. The IMF estimate for 2017 already seems much more plausible than the claims by Charles Abel as he rather deceptively refused to acknowledge the K408 million revenue shortfall in his recent Budget Speech even though the PNG Treasury budget documents indicated (see here). While there is some additional revenue from scraping the bank balances of some statutory authorities (K575m in 2017), the expected increases in revenue in the 2018 budget simply are not realistic (see here).

The combination of higher deficit projections and lower GDP figures means that the IMF’s estimate of the debt to GDP ratio is significantly higher than the O’Neill government’s estimate. Indeed, the international umpire estimates that the government will breach even the 35% maximum figure in 2017 and 2018 (with estimates of 35.4% and 37% respectively). Indeed, the IMF estimates that the debt to GDP ratio will reach 40.3% by 2020. And they also note the true figure would be much greater if superannuation liabilities and off-budget debt is included.

Future articles will examine in greater detail the reasons why the IMF considers “the overall risk of public debt distress is high” (page 3 of Debt Sustainability Analysis) – polite language for PNG’s greatly increased risk of a fiscal crisis because of its poor policies as well as the linked issue of failing monetary and exchange rate policies.