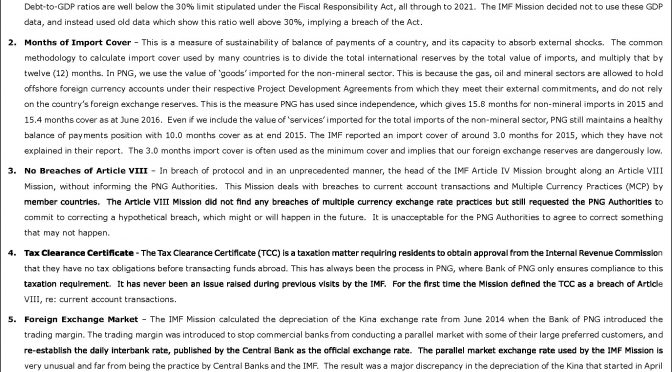 The Bank of PNG, the legislatively independent central bank for the country, lost significant credibility in its recent justification for why PNG has joined the bottom 2 per cent of countries in refusing to release the standard IMF Article IV report on countries (see here).  It remains the only country in the East Asia and Pacific not to release an IMF Article IV report undertaken in 2016.

BPNG provided six “critical issues” for refusing to release the report.  However, on closer examination, there was only one critical issue (fake GDP numbers used by the PNG Treasury).  And that should be the responsibility for the PNG Treasurer to release a statement on why the PNG was suppressing an independent assessment  by the IMF of the PNG economy.

What is the O’Neill government trying to hide on its management of the PNG economy?

International investors will easily through see this statement. PNG’s economic standing and credibility has received a severe down grade with this BPNG statement which confirms many investors’ fears.

Four of the six “critical issues” mentioned by the BPNG statement were present in the 2015 Article IV report and this did not stop publication. A fifth issue (the last one) is a procedural one on publication without agreement.  The only remaining issue is the fake GDP numbers from March 2016  that the IMF apparently refused to endorse. And this is one for the PNG Treasurer to front up to – not comprising the role of the central bank.

First, on the long-standing methodological differences on how PNG does not use standard international reporting practices on measuring “2.  Months of Import Cover” the 2015 Article IV report reported that the Gross Official international reserves were 3.1 months of goods and services imports in 2015 (see here page 4 about two thirds of the way down the page).  The BPNG has taken great exception to this figure being revised 3.0 of months of imports in 2015 according to the press release.

So why didn’t it object in such a way last year as to oppose the publication of the report of 3.1 months of imports (listed as a preliminary assessment) but strongly objects to a figure of 3.0 of imports??

Second,, BPNG jumps up and down about the incorporation of an Article VIII assessment (issue 3 and 4).  But this did not create issues last year.  Issue “3. No Breaches of Article VIII” clearly indicates that PNG has not yet moved down the path of a multiple currency practice..  However, on issue 4 related to Tax Clearance Certificates, see this quote from the 2015 IMF assessment:  “PNG maintains an exchange restriction subject to IMF approval under Article VIII, Section 2(a) of the IMF’s Articles of Agreement arising from the requirement to obtain a tax clearance certificate evidencing the payment of all taxes prior to making payments or transfers for certain current international transactions.” (end of paragraph 19 here ).

So this was already in the 2015 report which was released.  Why now use it as a grounds for suppressing the 2016 report??

“37. A further depreciation is needed to safeguard external buffers and eliminate imbalances in the FX market. To these ends, BPNG should allow the exchange rate to be more market-determined and move quickly to a market-clearing rate. This should be supported by suitably-tight fiscal and monetary policies. To facilitate this adjustment and improve monetary policy effectiveness, BPNG should mop up excess liquidity in the banking system. Staff does not recommend Fund approval of the tax clearance certificate regime as it is not temporary and has not been imposed for balance of payments reasons.”

So in the 2015 report the government of PNG was willing to release the assessment but with disagreements in authorities comments.   Why now suppress the 2016 report which probably had similar conclusions?

The third issue (listed as item 5) was on the “Foreign Exchange market”. The BPNG already stated in the “authorities views” response (so the views of the government of PNG) in the 2015 Article IV report (see page 33) that “The official interbank exchange rate was unchanged from October 2013 to early June 2014, when the BPNG introduced a foreign exchange (FX) trading band of 150 basis points around the official interbank rate, leading to a de facto kina appreciation of around 17 percent. Since then the exchange rate has depreciated by 16 percent, but excess demand for foreign currency has persisted. ”

So last year, the BPNG accepted there was  a defacto appreciation of around 17  per cent in early June 2014.  So why are they now objecting, and using it is a ground to suppress the IMF report??

There is a vital response from authorities in the 2015 Article IV (see here page 11). This comment is of particular interest given the recent confirmations from the Governor of PNG that the central bank is now backstopping government security auctions and so directly financing the government budget deficit.

“BPNG also reiterated its intention to avoid any direct financing of the government budget deficit.”

The central bank has reneged on this vital commitment.

This is a shameful development from the legislative independence of the central bank.

Countries may disagree with IMF assessments.  But releasing their reports with alternative views is the accepted international norm.  PNG has lowered itself considerably by refusing to release the IMF 2016 assessment report.

The arguments for not releasing this report are primarily a lie – PNG released a very similar report in 2015 with its own views last year.

The press release by the BPNG does not add credibility to the independence of the central bank or the government as a whole.

The only new issue is the fictitious view of a magical increase in the size of economy of over 40% in 2013 to bury the debt to GDP ratio breaching legislative limits – and the international arbitrator of the IMF does not accept the revisions.

The PNG Government is very much in election mode.  Unfortunately, and in a trend evident in other countries, the truth is no longer valued as much as citizens once expected from their governments.

This is an immoral development for PNG.