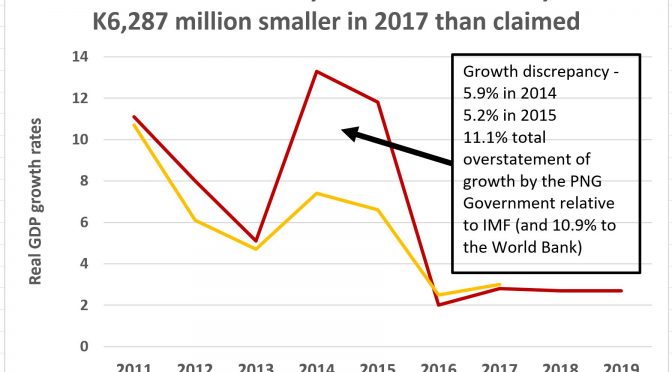 Fortunately for the country’s credibility, and after a foolish delay which reflects badly on the judgments of the Prime Minister, Treasurer and BPNG Governor, the PNG government has agreed to the release of the IMF Article IV assessment (see here – a link to the detailed staff report on the IMF site is available here  – as of Sunday night, it had not been uploaded on the IMF site despite several requests to the IMF media office – it has been distributed to registered media contacts and should be available by late Monday).

The most significant issues in the report are the very large differences between the O’Neill government’s statements on the growth rate of the economy and the views of the IMF (which are very similar to those included in the World Bank’s Global Economic Prospects report issued earlier this month).

These differences are shown in the graph below. During the term of the O’Neill government, economic growth has been overstated by 12.7%.  This occurred primarily in 2014 and 2015 with a combined overstatement of 11.1% (very similar to the World Bank’s figures of a 10.9% overstatement). 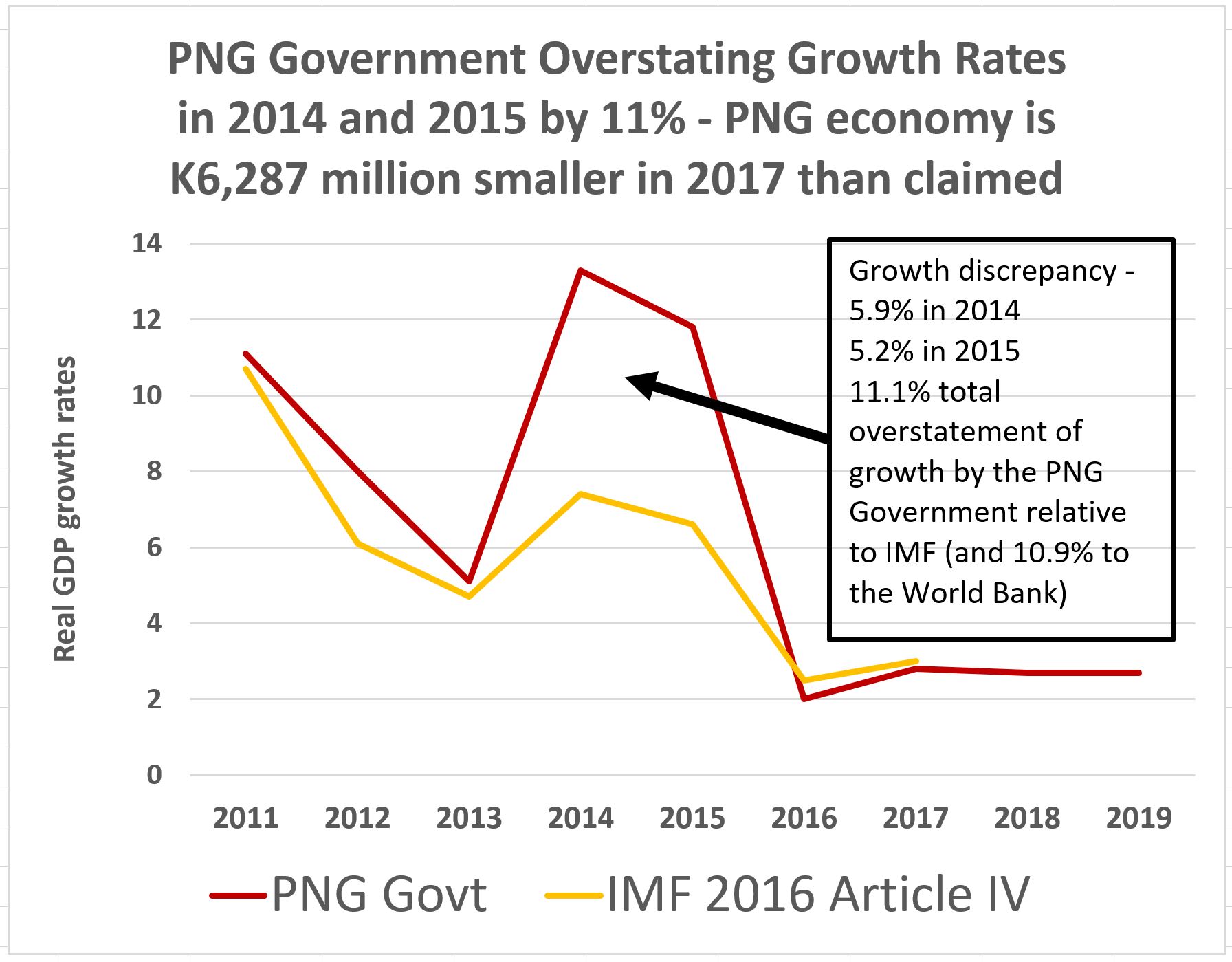 This means that the O’Neill government has also been overstating the size of the economy by K6.3 billion by 2017 (and K5.4 billion in 2016).

The differences in the GDP real growth estimates, as well as estimated GDP,  are significant and unusually large.  They also were very convenient statistics for the government.  Getting the IMF’s rulings on these figures is inconvenient, and probably the major reason for trying to suppress the IMF report (see here and here).

On the other hand, my previous blogs have estimated that there was a domestic recession in PNG.  The IMF figures indicate that non-resource GDP was indeed positive in both 2014 and 2015 (2.2 and 2.1% respectively), although non-resource GDP per capita is likely to have fallen or remained stagnant (given a PNG population growth rate of between 2.1% and 3.0%).  I an surprised with the IMF estimates in some areas (such as showing a positive increase in the agriculture sector in 2015 despite the worst drought in 20 years and major declines in most of PNG’s agricultural imports).  However, I accept the verdict of the IMF as it is an international authority on GDP estimations.  I hope the government will similarly accept the IMF figures on its breaching of the debt to GDP ratio and a lower growth performance.

In terms of PNG’s international standing, one of the most disturbing areas in the IMF report was the difference between the press release of the Governor of BPNG on 25 January, included as full page adds in the local press the next day, and what the IMF release actually says the following day (27 January).

For foolish and ill-judged reasons, the Governor of BPNG argued why there was a delay in releasing the report.  It is extremely difficult to reconcile the published reasons from the Governor with the actual report.

Specifically, the Governor argued (see here) the following (reason 3 in the press release) “3. No Breaches of Article VIII – … The Article VIII Mission did not find any breaches of multiple currency practices but still requested the PNG Authorities to
commit to correcting a hypothetical breach, which might or will happen in the future. It is unacceptable for the PNG Authorities to agree to correct something
that may not happen.”

This sounds technical but it is important.  And the people of PNG entrust the legislatively independent bank of PNG, and specifically that organisation’s leader, to uphold the highest standards across all the technical details of the international system.

The Governor’s Press Release and full page add also stated: “The Tax Clearance Certificate … has never been an issue raised during previous visits by the IMF”.

But once again, it is hard to reconcile this statement with IMF documents.  In 2015, the IMF Article IV report did list the Tax Clearance Certificate as a breach (see here – more specifically, this was the quote from the 2015 report in direct contradiction to the BPNG statement – “PNG maintains an exchange restriction subject to IMF approval under Article VIII, Section 2(a) of the IMF’s Articles of Agreement arising from the requirement to obtain a tax clearance certificate evidencing the payment of all taxes prior to making payments or transfers for certain current international transactions.” (end of paragraph 19 here ).  The 2016 report reiterates this breach  (page 3 of the IMF Information Annex).  So why claim there was no breach? This is difficult to explain, and certainly undermines the credibility of the leader of BPNG and likewise the current government.

And in addition to these two breaches, the IMF report actually finds a third breach of PNG’s obligations under its membership of international economic community.  Specifically, the IMF report states the following is another exchange restriction: “the rationing of FX and its allocation by BPNG to certain priority items, which results in undue delays and arrears in current international payments.”

This finding will not be a surprise to the businesses in PNG that are suffering under the O’Neill government’s foreign exchange restrictions.

Possibly not surprising that the O’Neill government wanted to suppress the IMF report.

Credit for the government’s agreement to the release, but possibly there was no option given public pressure over the last few weeks following the shameful attempt to bury the report.  Hidden secrets have been revealed, and this will form part of the democratic assessment of the management of PNG’s economy.

Certainly, the IMF, the respected international assessor, is saying the management of PNG’s economy is not as good as the government is claiming.

As foreshadowed in the Summary, there are other significant times in the IMF Report.  Given the length of this post, I’ll cover those in my next blog.