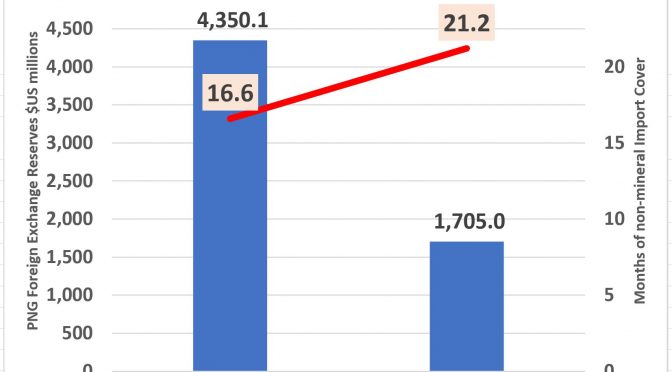 The International Monetary Fund’s 2016 report on the health of the PNG economy shows PNG’s international economic situation is much more frail than presented by the O’Neill government.

A key measure of international economic health is how many months of imports can be paid for by a country’s foreign exchange reserves. This is equivalent to a how long a family can survive on its bank savings to get through some unexpected tough times.

BPNG appropriately uses two import measures.  The first looks at all imports, the second concentrates on non-mineral imports.  As the non-mineral sector provides jobs and incomes to most people in PNG, this split makes good sense.

However, BPNG does not use internationally agreed definitions for these two import measures. BPNG only includes goods imports and excludes service imports. BPNG also appears to use data on recent import levels that are not publicly available. And a broader problem is PNG does a pretty lousy job in actually measuring imports – these are significantly lower than other countries’ export figures to PNG. This is a recognised problem but only slow progress is being made to fix it.

So the figures used by the PNG government give a misleading view on the actual health of foreign reserves.  As highlighted in yellow in the table at the end of this article, the government is claiming foreign reserves are the equivalent of 13.0 months of imports – a pretty healthy level.  But the IMF says the real figure is only 3.2 months of imports – less than one-quarter as healthy as the level claimed by the O’Neill government.

The discrepancies are even more pronounced when looking at the health of non-mineral import coverage.  The government claims it has improved from 16.6 months in December 2011 to a massive 21.2 months in October 2016.  This claimed “improvement” in the health of PNG’s external situation is shown by the red line in the graph below.  However, the actual level of foreign exchange reserves (the bank account that can pay for on-going imports) has actually fallen by 61% from $US4,350.1m to $US1,705m.  The claimed measure of health goes up by 28% but the underlying level of health goes down by 61%.  These are some very convenient statistics for the O’Neill government. 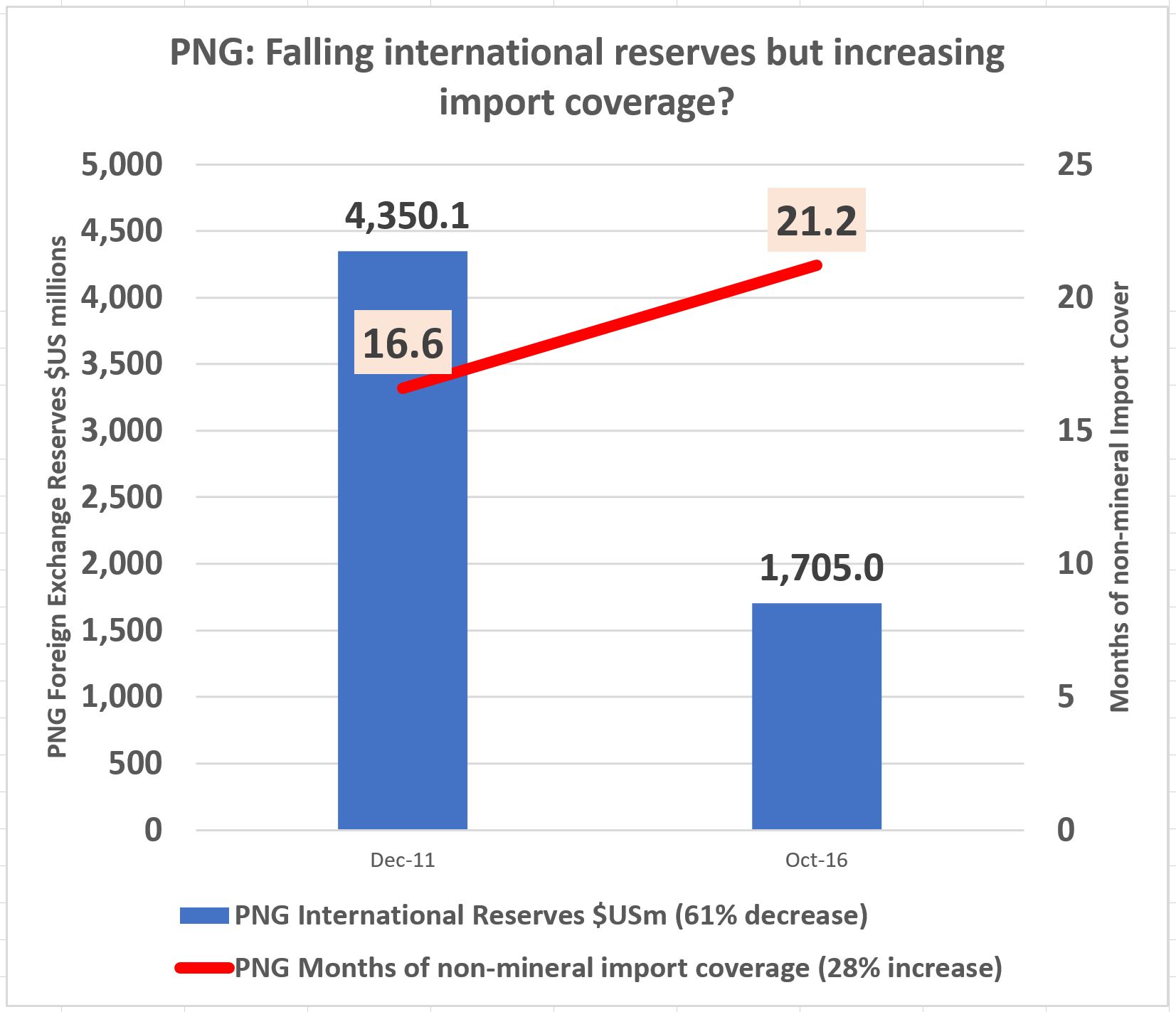 Clearly, part of the explanation is that the level of imports has been drastically reduced because of foreign exchange restrictions – from over $US260m per month to only $US80m per month. This drastic decline is not driven by increased local production but by excessive foreign exchange restrictions which are hurting businesses and consumers in PNG. As such, the apparent improvement is simply hiding a major decline in the opportunities in PNG and its standard of living.

So if we use the IMF figures instead, what are the implications of foreign exchange reserves being 3.2 months of imports?

A very old rule of thumb was that a country’s foreign reserves should stay above 3 months of imports. So PNG was just above the minimum level with 3.2 months.  However, in recent research released by the IMF in June 2016 (see here) a more tailored approach has been taken based on the experience of countries such as PNG.  This IMF research indicates  PNG should actually have at least 10 months of imports in its international buffer of reserves (and possibly closer to 12 months) [see final graph on page 23 of the PNG IMF Article IV 2016 report and the description of the metrics in the June 2016 IMF paper].

The policy implications of PNG running down its international reserves have been hidden by using misleading and excessively rosy measures of external health.  PNG should move to accepted international measurement standards.

PNG is also using old views on the adequacy of international buffers such as the “3 month import rule”.  PNG’s government should keep up with modern understandings of how to properly run an economy.

The IMF report puts these concerns in its usual very polite and diplomatic language: “PNG’s external position is moderately weaker than implied by fundamentals and desirable policies, given its weak gross foreign reserve position and overvalued real effective exchange rate” (opening of Box 4 on page 23).

So even the cautious IMF says PNG has a weak gross foreign reserve position and an overvalued currency (a subsequent article will cover the latter).

Economic policy inevitably involves judgements on difficult trade-offs between objectives. The full implications of the O’Neill government’s decisions  to move away from PNG’s market-based exchange rate, especially at a time of falling commodity prices,  are becoming clearer. PNG’s international buffers are only around one-third the recommended levels. More of PNG’s foreign exchange earnings, and at least some of any new international loans, now should be invested in rebuilding these buffers.

Poor economic decisions by the O’Neill government mean PNG is facing a much more complicated economic mess and tougher path to recovery. 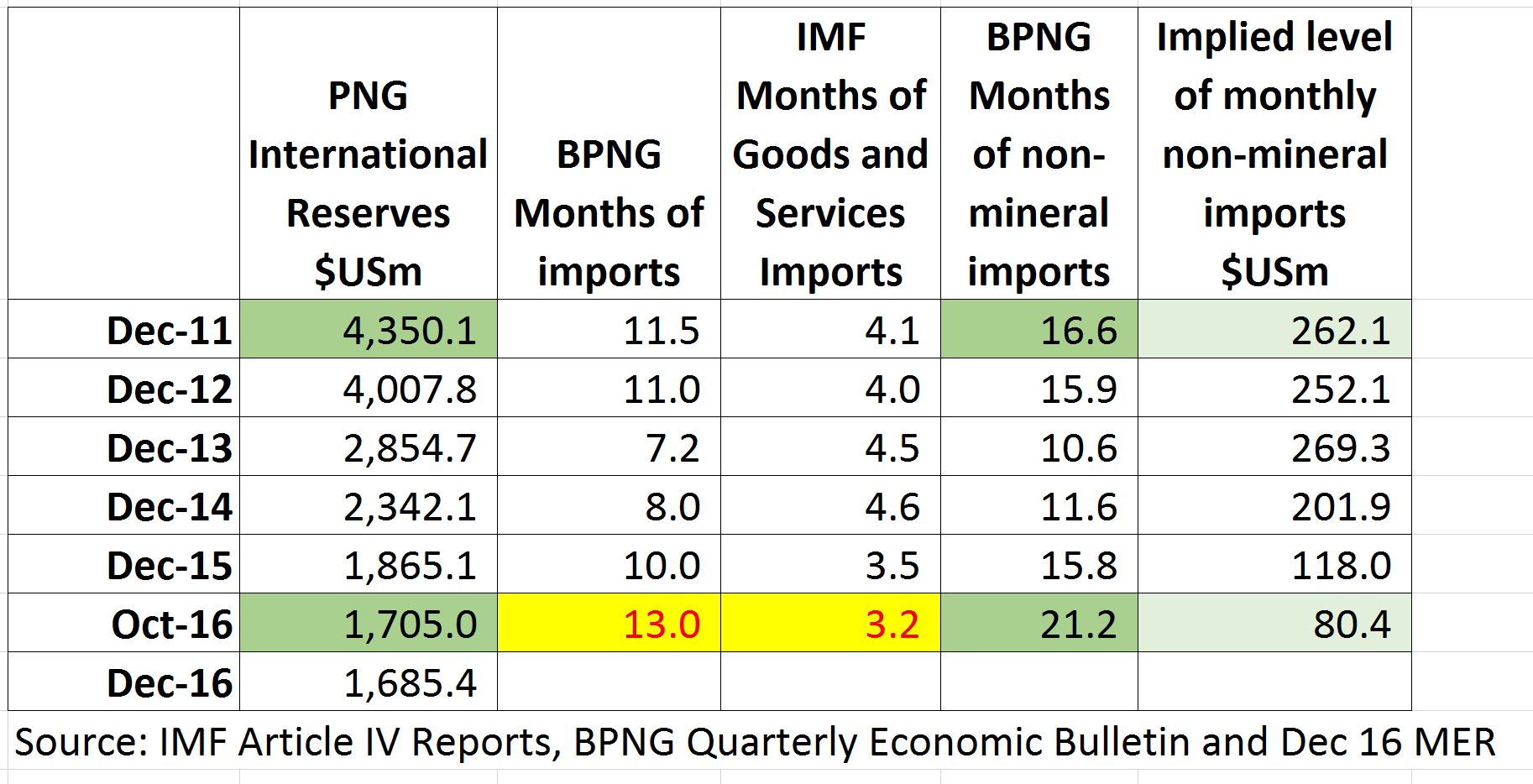