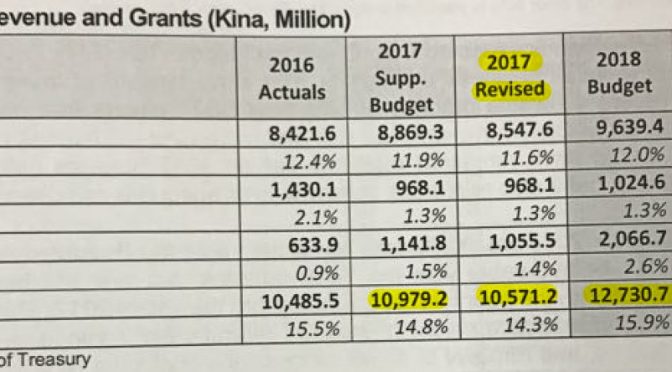 The new Treasurer released his first budget on 28 November. This was an opportunity to demonstrate the second term of the O’Neill government would help turn the corner on PNG’s economic mismanagement. So how did it do?

Overall, there are some wonderful sentiments in this first Abel budget. My sense is that he is very genuine in what he is trying to achieve. But he seems to be let down by the realities of PNG politics. Protecting  politicians electoral funds, finding money for APEC, trying to regain the upper-hand on the rhetoric of protecting health and education – all within the confines of fiscal responsibility – was simply too much. What has given way in this equation of  trying to be responsible while dealing with the political spending pressures has been revenue credibility.

Ultimately, he fails in his attempts to explain why we should believe his claim that revenues will suddenly jump by over 20 per cent in 2018. This is an increase of over K2.2 billion and an extraordinary reversal of collapsing revenues in recent years (see graph below). 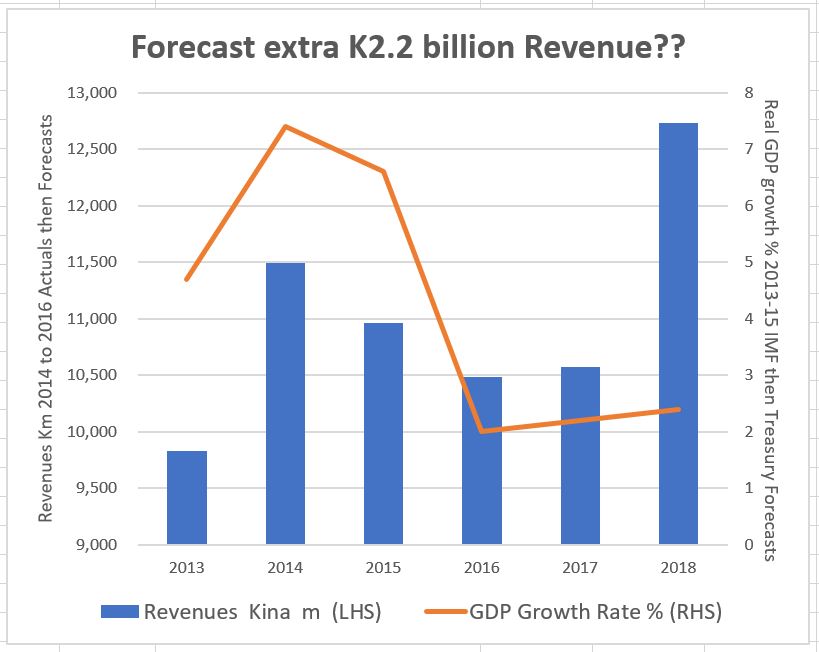 Usually, such an increase can be justified by a major tax increase (there isn’t one), a major new project starting which actually produces revenue (there isn’t one in 2018), or a rapid expansion in economic growth (2.4% real growth is not rapid growth).

For me, Abel’s Achilles heel on his budget’s revenue credibility is his deceptions in the Budget speech. The new Treasurer is so wedded to the claims of his 100 Day Plan that he hides from numbers that show he is failing.  Specifically, he continues to claim the deficit will not go above 2.5% of GDP. This is the first point in his 100 Day Plan, so it is understandable he is sensitive on this one.

But throughout his speech, he uses old 20117 revenue numbers when his actual Budget documents show an inconveniently lower number.  2017 revenues are now forecast, according to his budget but not his speech, to fall by K408 million from K10,979m at the time of the Supplementary Budget to the 2017 Revised Estimate of K10,571m (see Table 11 below from 2018 Budget Volume 1).

And with this official revision to revenue forecasts, and no indication of changed expenditure, then the deficit also increases in 2017 by K408 million.

PNG’s forecast fiscal deficit for 2017 is now 3.1% of GDP. The new Treasurer has failed to meet both elements of the very first point in his 100 day plan – deficits are bigger and debt is higher than he promised less than 100 days ago.

In many ways, K408 million is an understandable revision. Indeed, my view is that the actual revenue outcome will be some K500m lower than even this figure as the assumptions on dividend payments are still unrealistic. However, the point here is one of credibility.

And the games played by the Treasurer in his speech on hiding the real state of the budget does not inspire confidence.

One cannot spend what one doesn’t get.

So there will be real decisions ahead on which pet projects will not be funded. And my fear is that if there is a choice between APEC funding and electoral funds vs health and infrastructure spending, the latter will be the losers in the inevitable 2018 Supplementary Budget.