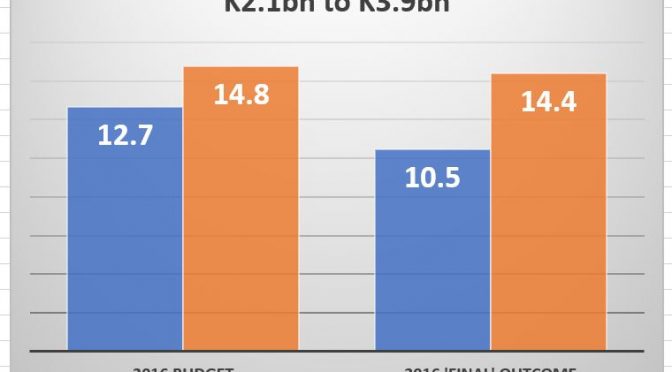 Some boring people (like me) will spend today and tonight going through the fine detail of PNG’s budget numbers.  As we battle to stay awake with too many cups of coffee, I thought it might be useful to have a quick reflection on the likely accuracy of the big picture budget numbers we will see today.

2016 is also good because we may have numbers of the actual outcome. We certainly don’t have all these numbers for the 2017 outcome as yet.

2016 is also an interesting year to examine because the starting numbers are almost exactly the same as the estimates in this month’s 2018 Budget Strategy.  Both 2016 and 2018 have revenues of K12.7 billion expected.  Both have expenditures of about K14.7 billion. So 2016’s experience may provide a preview of the 2018 budget experience.

The key starting difference is that the 2016 revenue numbers were much more conservative. They expected almost exactly the same level of revenue as expected would be collected in 2015. Extraordinarily, the 2018 Budget Strategy’s starting point for revenues is 18% higher than the expected 2017 revenue figure of K11.0 billion.

So how did the accuracy of the 2016 Budget numbers go? 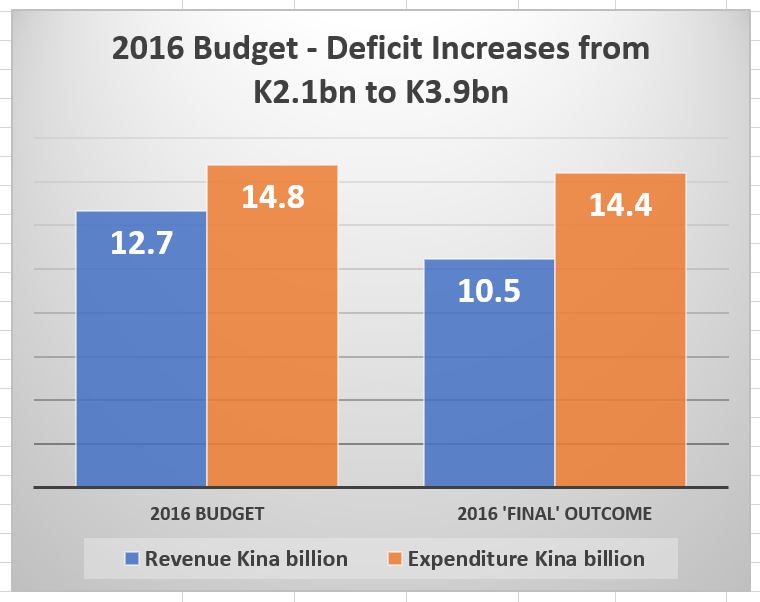 The biggest budget error is that revenues were over-estimated by K2.2 billion –  a 17% inaccuracy. Once again, it is interesting that the 2018 Budget Strategy revenue figures are assuming an 18% increase (not very realistic).

With the collapse in revenues, it looked like the government was taking some corrective action and reducing expenditure (in the wrong areas such as health, education and infrastructure but that is another story). The 2016 Supplementary Budget aimed to cut expenditure by around K1 billion, and the FBO indicated that expenditure ended up some K1.2 billion lower than the original 2016 figures.

But then comes along PNG’s central bank’s (BPNG’s) latest Quarterly Economic Bulletin released late last week. On top of page 8 of that report, it explains the on-going rapid increase in public debt in 2017 with this extraordinary explanation “and the encashment of presented cheques from the previous year, totalling K829.4 million”. So actually, BPNG is admitting that there was another K829.4 million in unpresented cheques from 2016, and these are only now being paid.

In any decent accrual system of accounting, these cheques should be allocated to when the expenditure obligation arose – back in the “previous year” – that is 2016. This extra K829.4 million in expenditure needs to be added to reported expenditure in 2016. This then lifts the deficit from K3.1 billion at the time of the FBO up to K3.9 billion.

Deficits of 5.8% of GDP simply are not sustainable when PNG’s growth rate is back at around 2%.

In economic terms, that is a huge difference.  K1.8 billion –  a near doubling of the original budget deficit estimate.

And of course, we still don’t know if more  “cheques from the previous year” will be presented.

On other figures, the 2016 Budget assumed real GDP growth would be 4.3 per cent but the outcome more than halved to 2.0 per cent. Many consider the figure was actually negative based on falling sales, falling employment, falling credit, falling imports and falling tax receipts in 2016.

There were also serious games with the reported debt to GDP ratio. The legislative limit for this ratio was 30% in 2016. So you could have expected some horror in the Prime Minister’s Office when the budget said it would be exceeding this limit. The fixers went in, and suddenly the debt to GDP ratio dropped from 35.8% to 29.4%. By the time of the often more independent FBO document, this figure had moved back above 30%.

For those examining the details of the 2018 Budget, with starting numbers almost identical to the 2016 Budget, there is a need to be very careful. Games have been played in the past. There is a need for a detailed and realistic examination of  budget assumptions to determine if they are credible.

Frankly, the reported started point of an 18% increase in revenues in 2018 when the economy is struggling is a very, very worrying starting point. If the updated 2017 revenue estimate is even lower, then the 2018 will lose all credibility.

Given the similarities with 2016, I fear the people of PNG already need to get ready for some big expenditure cuts in the near inevitable 2018 Supplementary Budget along with a blowout in the budget deficit and public debt levels.

One thought on “Can we Trust PNG’s Budget Numbers?”