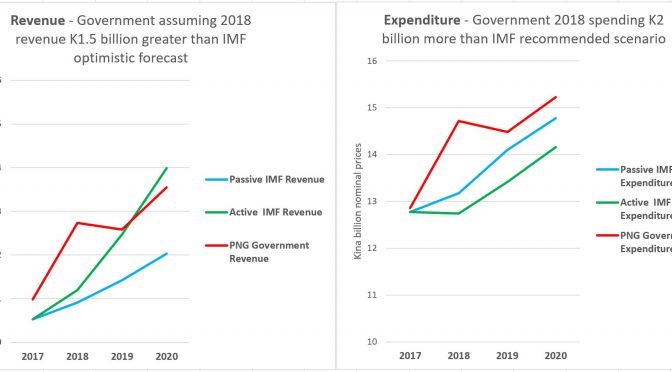 The 2017 Supplementary Budget was a good start for PNG’s O’Neill/Abel government, but it then stumbled badly. Politics and presentational games have overtaken good economic policy.

The PNG Government has gone on an unsustainable spending binge in 2018 – expenditure is K2 billion higher, or 16 per cent, than the IMF was hoping.

The fiscal implications of this unsustainable spike in expenditure is hidden through misleading revenue games. The 2018 Budget assumes revenues K1.5 billion higher than the IMF’s optimistic scenario.

The IMF also estimates that the deficit to GDP ratio will exceed 3%. Looking at the experience of the 2016 budget, including on-going revelations about payment arrears, the risk is that the deficit will end up being closer to 5% of GDP.

The IMF released its annual review of the PNG economy in late December – see here. In an earlier article, I covered some of the economic implications of the analysis – primarily that the IMF estimated PNG’s GDP would be some 10% lower in 2018 than forecast by the government. This article focuses on the budget elements of the annual Article IV review by a relatively independent economic commentator.

The IMF Article IV review of PNG was broadly positive of the 2017 Supplementary Budget. Indeed, it noted the Supplementary Budget contained “bold measures to ensure a narrowing of the fiscal deficit.” However, it immediately went on to say “Nonetheless, on unchanged fiscal and monetary policies, PNG faces several more years of economic stagnation with a growing risk of fiscal and financial instability as the debt-to-GDP ratio continues to rise and financing of deficits becomes increasingly difficult.” (IMF Press Release 17/523 3rd para).

So what were the “unchanged fiscal” policies that the IMF feared, and what alternative path was the IMF suggesting?

The IMF’s report was completed on 17 November 2017, 11 days before the release of the 2018 Budget  So the IMF had no opportunity to comment directly on the 2018 Budget. However, the IMF did set out what it regarded as a “passive” scenario which would continue economic stagnation – this is the business as usual case. The IMF also set out a more optimistic or “active” scenario of better fiscal settings.

This post analyses the 2018 budget relative to these two scenarios included in the IMF report. The IMF’s analysis was based on shares of GDP. The following table converts these percentages into actual Kina billions (by simply multiplying the percentages with GDP) to allow a comparison with the 2018 budget.

[Source:  Text Table 1 on page 12 of the report. IMF GDP figures drawn directly from the Article IV report for the “business as usual” passive case. For the “active” case, these nominal GDP figures are adjusted upwards slightly as the IMF estimates  in Text Table 1 that nominal GDP will be slightly larger as the higher inflationary impacts will be larger than the smaller real growth impacts -so net increases in nominal GDP of 1.4% in 2018, another 2.6% in 2019 and another 2.7% in 2020.]

The key conclusion is that the IMF 2018 Budget’s expenditure is an extraordinary 16% – or K2 billion -greater than the IMF was hoping for. Indeed, 2018 expenditure is 12% – or K1.5 billion – greater than the assumed “business as usual” scenario. Clearly, the IMF did not expect the blow-out in government expenditure that occurred in the 2018 budget. If it had done so, one would have expected much sterner warnings about the actual fiscal risks now facing PNG.

Equally extraordinarily, budget revenue forecasts were much, much greater than expected by the IMF. The PNG government is expecting 1.5 billion Kina in extra revenues even beyond the IMF’s most optimistic “active” policy scenario. This is the case even after allowing for K0.6 billion in once-off “sweep” revenue – mainly from the National Fisheries Authority. Given the amount of assistance the IMF has given in the areas of revenue forecasting and the new medium-term revenue strategy – so they would have had excellent access to the latest information and modelling from the PNG Treasury – the gap of K1.5 billion is very concerning for 2018 budget credibility.

The very unusual nature of the PNG government estimates for 2018 are shown in the following graphs. One would usually expect a steady increase in both revenue and expenditure, not sudden bumps unless there were clear reasons for their being so.  It is extremely hard to understand the massive revenue spike upwards in 2018 and then a fall in nominal terms in 2019. This is also the case for expenditure. There are once off costs for APEC, but these are shown  in the budget as totalling only K0.3 billion, slightly up from 2017 (clearly an unrealistically low estimate based on previous APEC’s and earlier IMF estimates). Expenditure and revenues have very suspicious spikes in 2018. They were not expected by the IMF under either of its scenarios. And the drop back to more realistic figures from 2019 suggest there is something very fishy, indeed something potentially fraudulent, in the 2018 budget numbers.

A positive of the budget is that it recognised the dramatic fall in revenues in recent years and set out a medium-term revenue plan to address these issues. As noted in the new strategy, revenues (excluding donor grants) have fallen from around 20% of GDP from 2012-14 down to below 13% of GDP in 2017.

However, it is interesting that by 2020, the planned revenues are below the levels that the IMF considers possible under an active policy strategy (see LHS of chart above). Indeed, a revenue to GDP target of 14% appears too low given PNG’s development challenges. The revenue plan also is not explicit enough that the level of taxes on the resource sector should be increased. Economic theory suggests that the average tax rate in the resource sector should be higher than the non-resource sector, so a target tax ratio closer to 30% for the resource sector would seem appropriate (which is close to its average levels in the 1990s and 2000s). In addition, although it is positive that a revenue crisis has been acknowledged, the O’Neill/Abel government has not acknowledged the underlying issue of poor economic performance – see here.

One positive element of the plan is that the revenue forecasts from Treasury now form the basis for the new Medium-Term Development Strategy. This will remove the tendency for National Planning to use questionable models that generate unrealistic expectations about likely revenue flows which in turn opened an unmanageable gap between annual budgets and medium-term expenditure planning.

A particularly negative element of the plan is the foolish decision to “increase tariff rates to assist adjustments in the manufacturing sector”. This is protectionist fiction and simply indicates the increased power of the manufacturing sector relative to consumers and the overall health of the economy. PNG is not focusing on its areas of comparative advantage needed for sustainable development.

The IMF Article IV report was complimentary about Treasurer Charles Abel’s first budget – the 2017 Supplementary Budget. It had hopes for an active fiscal policy continuing into the 2018 Budget. They would have been sorely disappointed.

The extraordinary blow-out in expenditure, backed by very unrealistic revenue expectations for 2018, severely damages the credibility of the new Treasurer. The politics of protecting constituency funding, the need to be seen to at least reverse the massive cuts in infrastructure, health and education in recent years, as well as the high costs of hosting APEC, contributed to this unexpected blow-out in expenditure.

The 2018 budget figures are very similar to the 2016 budget – K12.7 billion in revenue and K14.8 billion in expenditure. Actual revenues in 2016 ended up being K10.5 billion – an extraordinary shortfall of K2.2 billion – see here. There is a fear that this experience is about to be repeated with probably around K2 billion in unrealistic revenues as even higher oil prices will take considerable time to flow into higher revenues. Large revenue shortfalls means large expenditure cuts and even more difficulties financing the deficit. With O’Neill and his advisors dominating government economic policy once again, no lessons appear to have been learnt. The people of PNG will be the ones that will eventually pay the price.