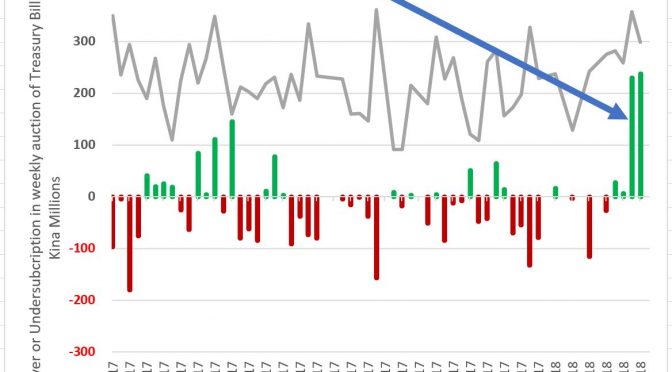 PNG is reported as having a cash crisis. A leaked central bank email in late February highlighted the difficulties in having the cash to pay public servants. The response to PNG’s recent earthquake has been hampered by a lack of cash going out to relief operation centres.  Departments are being locked out of offices due to non-payment of rents.

In the context of this cash crisis, there is the extraordinary fact that the PNG government turned down K300 million in cash offered to it by the private sector on 7 March. It then turned down K270 million on 14 March. These amounts were the level of funds offered through the weekly Treasury Bill auction less the amount actually accepted by the Government.

This K570 million level of excess funding (or over-subscriptions) by PNG’s banks, financial institutions and superannuation is unprecedented. It represented an opportunity to collect some scarce cash to pay down bills and help meet the needs of the PNG’s disastrous earthquake.

This opportunity possibly has been squandered. Someone should be held accountable for such decisions – probably the Secretary of the Treasury, and if he informed the Treasurer, then the Treasurer himself.

And what will the government do on 21 March if the opportunity is offered again?

A normal part of government is managing cash flows.  Tax receipts can come in at times different to when bills have to be paid. Indeed, in PNG, with company tax coming in relatively late in the year, and the desirability of paying some bills towards the start of the year (such as payments to schools and to provinces) there is a need to raise some extra cash earlier in the year. In addition, the O’Neill government has been running the largest deficits in PNG’s history, and these have been primarily financed by short-term domestic debt raised through the weekly Treasury Bill auctions. Over recent years, the share of this short-term debt has increased from 19% of reported public debt in 2011 to 39% in 2017 and now totals at least K9.4 billion based on 2018 Budget figures (of course, there are large debts that are being hidden off-budget). The problem of short-term debt is that the government has to roll it over regularly depending on the term (usually between 3 and 12 months). Combining these three elements (differences between revenues and expenditure, financing the deficit, and rolling over debt from previous deficits) while keeping interest lows and avoiding too much bunching of previous debt becoming due is the standard challenge of cash management.

In PNG, there is a weekly meeting of the Public Debt Committee to determine cash funding needs. This PDC includes key government agencies such as Treasury, Finance, the Internal Revenue Commission and the Bank of PNG. Each week, they determine how much should aim to be raised during the weekly auction managed by BPNG. The following graph indicates the level of these cash requests (or government offers of Treasury Bill securities) from weekly auctions over the last 15 months. 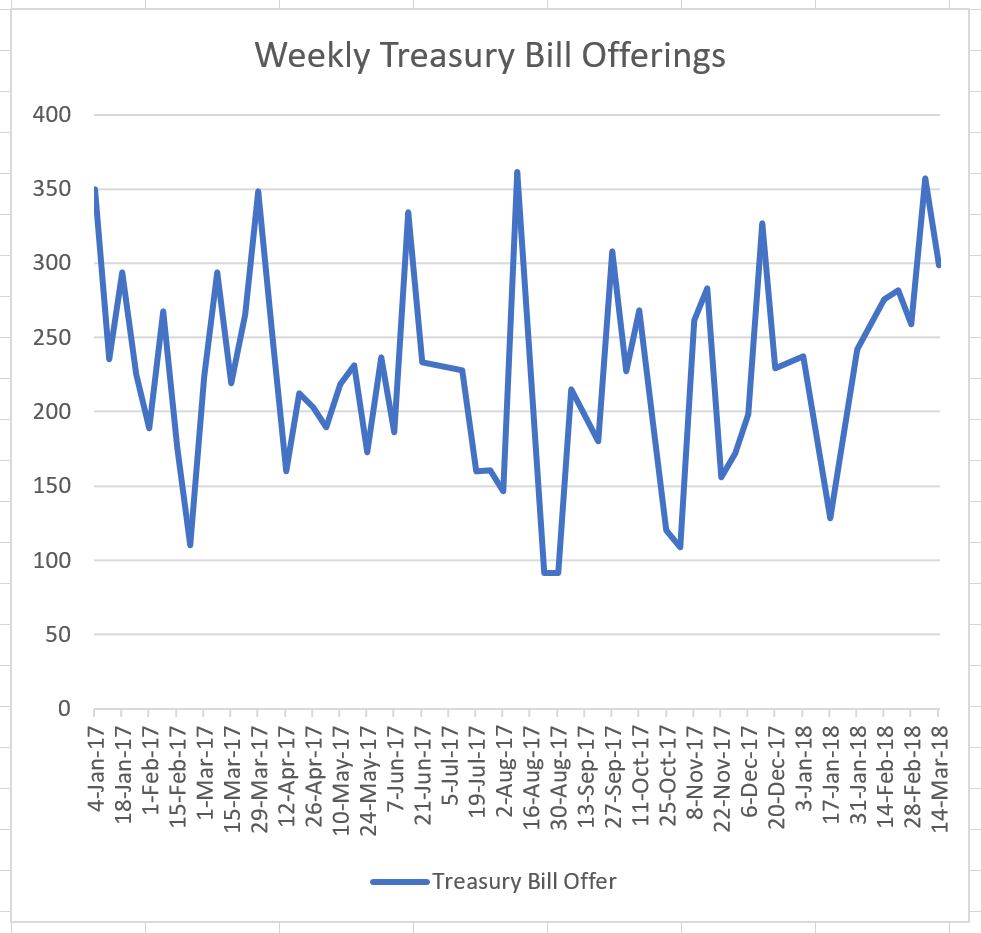 (Source: BPNG website on Treasury Bill auction results as well as Kina Securities Weekly Investor Updates – data is missing 7 data points out of 62 possibilities due to non-reporting of information)

On average, the weekly auction has aimed to raise K225 million Kina. The actual weekly amounts requested vary considerably, from slightly under K100m to over K350m. These offers are made to PNG’s major financial institutions (there is a very small investor market but this operates at only around K1 million per auction). On 60% of occasions, PNG’s financial institution do not offer as much cash as the government through the PDC is requesting.  This is called an under-subscription. The average under-subscription over the last 15 months has been K59m. On 40% of occasions, PNG’s financial institutions offer more than is requested. On average, this has been K55 million. Sometimes this over-subscription is taken up, depending on the interest rates being requested from the private sector.

However, something extraordinary happened over the last two weekly auctions. The level of over-subscriptions has jumped dramatically.  The details of the latest weekly auction result is copied below as an example: 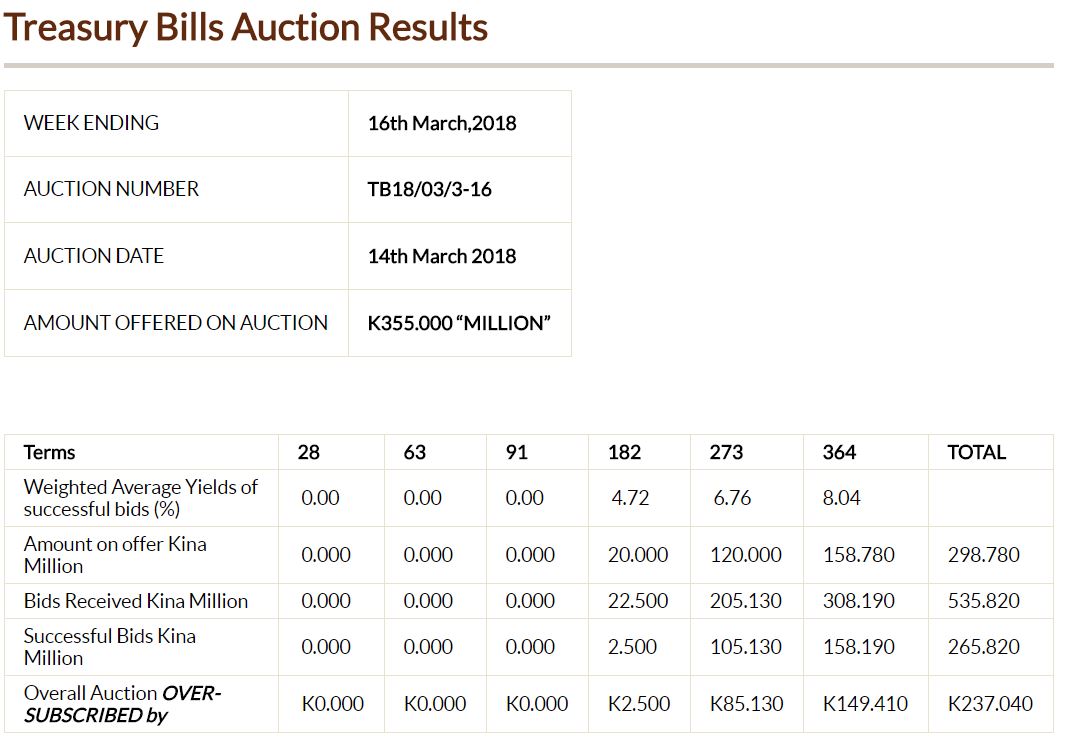 The government sought funding for a mix of 182 day (six month), 272 day and 364 day  (one year) Treasury Bills totalling just under K300m. The private sector offered K535m, a massive level of over-subscription. Then two things happened. First, the government rejected this K235m extra cash that was being offered by the private sector. Second, the government dropped the level of funds it was raising down to K265m, so effectively rejecting a further K35m that was being offered. A similar things happened at the 7 March auction – K357m was initially sought, the private sector offered K587m ( an over-subscription of K230m), but the government dropped the level of funds being raised down to K287m, thereby effectively rejecting another K70m that was being offered. The extra-ordinary nature of these over-subscriptions is shown in the following graph. 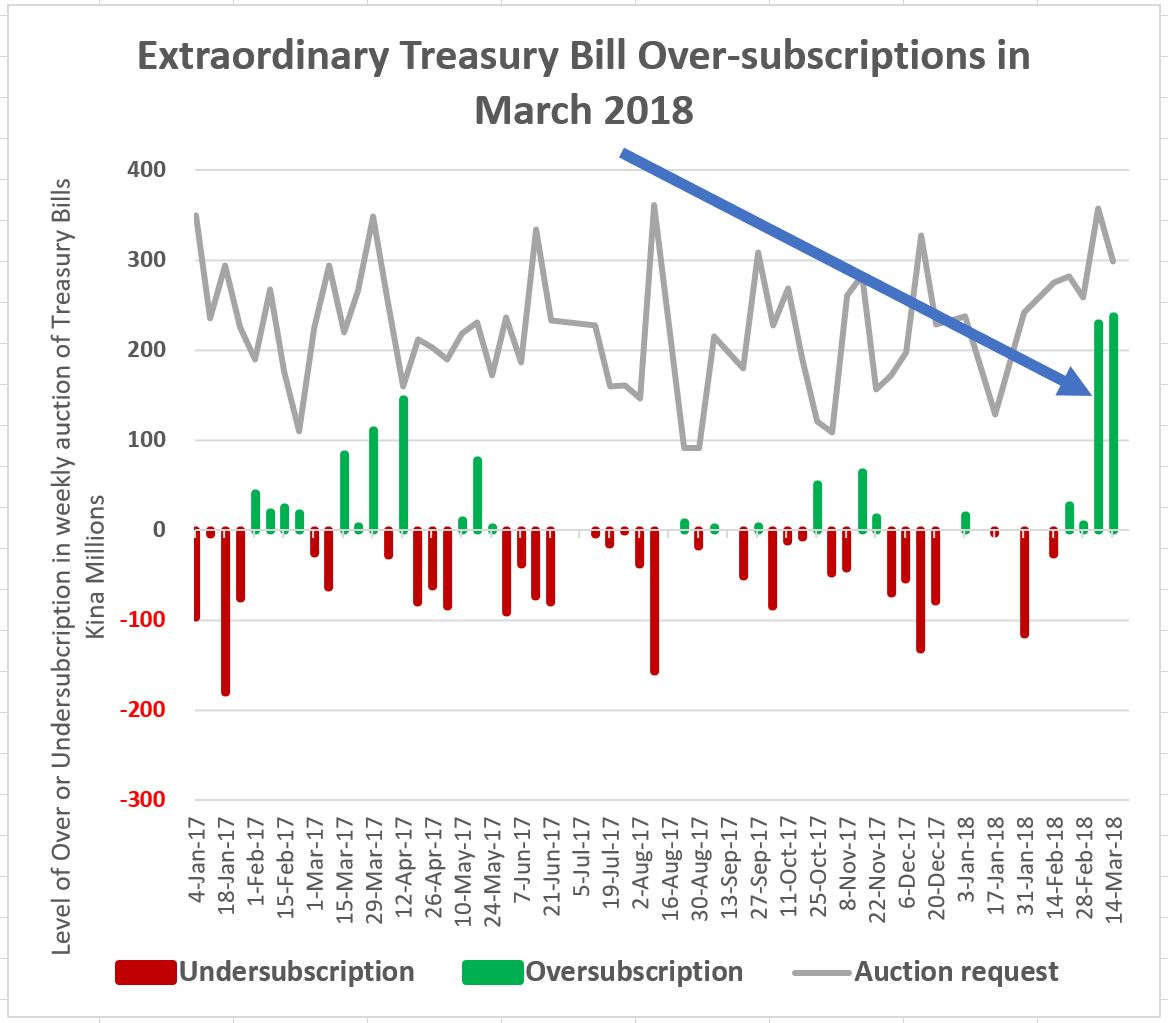 This was an amazing opportunity to help meet some of the backlog in legitimate bills that the PNG government owes as well as meeting the needs of earthquake victims. Possibly, if the first K300m was taken up, there may have been less available the next week but that is unknown. The reasons for the rejection may because of a refusal to allow average interest costs to increase at all, and a fear of future bunching, but these are very difficult judgement calls given the cash needs within PNG. Surely a better decision would have been to accept the cash even if this pushed interest rates up slightly and any bunching issue was handled with forward planning.

My view until March 2018 was that the O’Neill government was facing a major cash crisis. This was caused by poor fiscal policy with a continuation of the worst deficits in PNG’s history. His way out had been a compliant central bank governor that was generally willing to print money (through the ‘slack arrangement’). This was a very dangerous course for PNG.

Then the last two Treasury Bill auction results indicate that the private sector was offering a partial way out of PNG’s cash crisis without printing money. For reasons that should be provided, the O’Neill government decided to not accept up to K570m in extra cash financing. Of course this cash should not be used just to finance some further “big man” projects or funneled into questionable and corrupt contracts. However, there are some very legitimate cash financing requirements that could have been met – including providing a better response to the earthquake. The big questions are whether anyone will be held accountable, and if the opportunity arises at the Treasury Bill auction on 21 March, what will the government do?