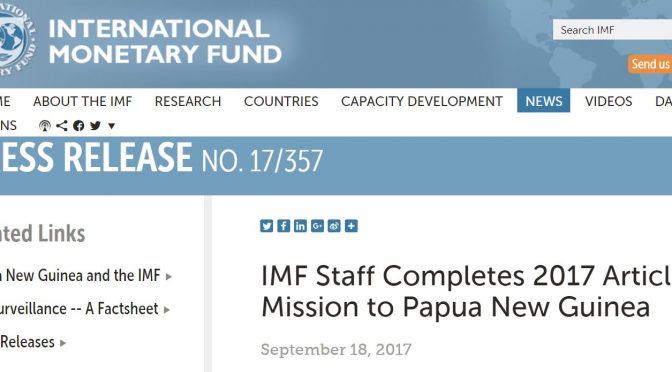 The press release from the latest mission of the world’s International Monetary Fund (IMF) – see here – highlights the difficult road ahead for PNG in dealing with recent years of bad luck and economic mismanagement.

On the fiscal front, the IMF considers that the government will fail in the Supplementary Budget to bring the 2017 budget deficit back to the target of 2.5% of GDP. Rather, it estimates the deficit will be “a little over 3%” – so a gap of some K370 million relative to the 100 day target.

The goal to reduce the debt to GDP ratio back to the legislated level of 30% as part of the 2017 Supplementary Budget is also recognised as infeasible. Instead, the suggestion is a medium-term objective of moving to a balanced budget by 2020 (and GDP growth will work to reduce the ratio).

So the first two targets in new Treasurer Abel’s 100 day plan are likely to fail.

Despite these negatives, my overall reaction to the IMF report is a very positive one.

First, as the government would have had to approve the IMF post-mission press release, it indicates a very different attitude than the attempts to suppress the 2016 report – see here and here.  PNG’s behaviour ten months ago placed PNG towards the bottom of all countries and ensured it had little chance of issuing a Sovereign Bond. The release is a very positive step towards transparency.

Second, the IMF Article IV report comes out at a very similar time to another report from an IMF tax reform mission. PNG appears to be engaging positively with the international community.

Third, indications are that the consultation process in these missions were positive and wide-ranging. There is feedback that Treasurer Abel also worked to ensure a very broad-based approach towards the preparation of the 100 day plan. Broad and constructive engagement makes for better decision-making.

The IMF report highlights the tough road ahead for PNG to start crawling back up from itslippery slope of economic mismanagement in recent years.

On the budget side, the IMF targets public sector wage costs. As anyone with experience in the largely failed attempts to reform and reduce the size of the public service in the early 2000s, this is actually very difficult to achieve (see some details below as an example).

The second target for expenditure cuts in the DSIP and PSIP programs will also be a political hot potato.

On the revenue side, there is optimism for increasing tax collections on both the resource and non-resource sectors.  Given the precipitous drop in PNG’s tax revenues – most of it in the non-resource sector – it still seems very likely that new taxes will be required or rates increased. The early days of a new government are often seen as the best times for such difficult adjustments.

Loi Bakani’s shameful approach to monetary policy gets some stick – of course diplomatically worded between the lines. The rigidity of the foreign exchange rate controls are seen as both damaging current growth as well as undermining PNG’s international competitiveness (and thereby adversely affecting moves to strengthen other sectors such as agriculture and tourism).

On the exchange rate, it is interesting that the IMF is suggesting a gradual move towards a more competitive exchange rate given inflationary concerns (an alternative approach sometimes tried is the “short, sharp shock”). The IMF notes PNG’s core inflation rate is only 2-3%, suggesting the IMF considers there is scope to start moving to a more competitive currency immediately.

Overall, the IMF’s suggestions are sensible. The two-track approach of dealing with short-term challenges while building the base for longer-term inclusive and sustainable growth is appropriate.

The return to transparent and consultative processes by the new Treasurer is very welcome.

However, as highlighted in the discussion of the PERR below, similar sentiments and plans have been put forward in the past – in much greater detail than currently. PNG failed on much of this promised reform in the mid-2000s.

The challenge is credibility around on-going implementation.  There is some very tough politics ahead to get such reforms in place.  The Treasurer is only one voice in the NEC. He will need to galvanise his cabinet colleagues around the reform path and transform fine words into tough actions.

Details on the Public Expenditure Review and Rationalisation (PERR) Program

There are many lessons from PNG’s own economic history.  Following is an extract (available here) which outlines some of the background, plans and initial steps for the 2002 PERR program.

Much of this sounds very similar to discussions today  -disturbingly similar.

The key question now is the credibility for sustaining any similar reform path over many painful years.

“The PERR is a joint initiative of the Papua New Guinea government, World Bank, Asian Development Bank (ADB) and AusAID, initiated in 2002, aimed broadly at improving fiscal management. It is described in the MTDS 2005–2010 (57–58) as ‘a key vehicle for generating the savings and cost-efficiencies necessary for the successful implementation of the MTDS’. A PERR Implementing Committee is chaired by Treasury.

On the subject of fiscal sustainability, the authors of the PERR paper suggested in 2003 that:

‘The root causes of PNG’s fiscal malaise lie in poor governance in public finance management. Although most of PNG’s budget systems are sound, and by some accounts even sophisticated, poor governance over the years has led to an erosion of budgetary discipline, weakening of accountability and proliferation of waste, leakage, irregularities and malpractices across the board….tinkering with budget numbers and mandating ad-hoc expenditure cuts, as the Government has tried in the past, can hardly be expected to be effective in such a flawed system.’

Several areas were identified for attention in the subsequent papers.

With regard to civil service size and payroll, it was argued that ‘public sector employment in PNG is larger than the country needs or can afford’, and that ‘the payroll system is flush with waste, leakage and irregularities’. A DPM audit suggested that there were some 2000 unproductive public servants on the unattached list (1200 of them in provincial administrations) in 2002, and ‘a large number of ghosts on the payroll’. Departments were said to recruit and make payments with no regard to budget ceilings, and Treasury was accused of ‘unrealistic appropriations’.

On the topic of restoring the integrity of budget institutions and systems, it was argued that ‘poor governance over the years has allowed [budget systems and processes] to be ignored, neglected, misused and abused’ while ‘watchdog bodies have been rendered ineffective because of absence of follow-up action on the irregularities they uncover’, with cases ‘delayed, blocked or even abrogated because of political pressures and vested interests’. There was ‘no sense of collective responsibility for the overall budget strategy’. Decentralization was said to have ‘led to an erosion of budgetary control’.

In relation to expenditure adjustment and prioritization, the PERR authors proposed an agency-by-agency review of functions (apparently going beyond existing Functional Expenditure Reviews), expenditure patterns and staffing levels, outputs and results, and whether certain functions might be privatized. They also supported the development of a Medium-term Expenditure Framework.

Actions on several of these fronts were detailed by the Minister for Finance and Treasury in his 2004 budget speech. As part of improved management of public sector employment and control of personnel expenditure, measures had been taken to remove ghost names from the payroll, implement a Concept Payroll System, reduce the pool of unattached officers by reassigning them or scheduling their redundancy, reduce the number of casual employees, and improve budget estimates and expenditure controls. In 2003 the Public Service (Management) Act was amended to facilitate merit-based appointments at senior levels; this is to be complemented by measures to extend merit-based appointment procedures to statutory authorities, and supported by a system of performance-based contracts (the appointment of senior public servants has, however, remained a point of controversy[6]). A review of government procurement was undertaken in 2001, and subsequently measures have been taken to strengthen the Central Supply and Tenders Board (CSTB), reduce discretionary powers to create lower-level supply and tenders boards, and improve information, reporting and disclosure systems (though not all departments have subscribed to the new measures). A Budget Screening Committee, comprising deputy secretaries of the central agencies, was created in 2003 to evaluate spending programs, assist prioritization of spending, and establish expenditure ceilings in the preparation of the 2004 budget. The government also announced its intention to develop a Medium-term Budget Framework within which to consider adjustments to public expenditure in the light of changes in available funding. And the Financial Management Improvement Program (FMIP), ‘an integrated reform program of financial management at all levels of the government’, was described as ‘the most significant single reform of financial management ever undertaken by the Government’. (Papua New Guinea 2003, 27. Also see FMIP 2003).