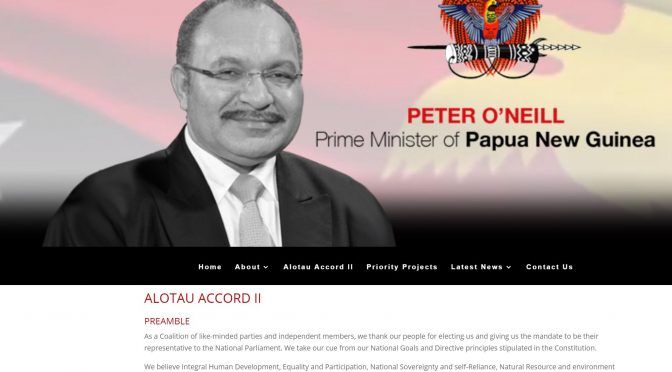 Alotau II (see here) fails as a vision for PNG’s future. It insults women, the rural poor, and business credibility.

It insults the majority of PNG’s population by placing women’s economic empowerment as only the 89th item of its list of 90 priorities – and it does so under the heading of “PNG Immigration and Customs Services”. It makes no mention at all of women’s social empowerment – so taking action to address issues such as domestic violence and killing “witches”.  And there is also no mention of women’s political empowerment. PNG’s 111 member all male parliament will have to do better.

It insults the majority of PNG’s population by having no path forward for agriculture, the source of livelihood for over 80 per cent of its population. Mentioning e-agriculture (priority 80), and only talking about reviving plantations (priority 15) is no way to deal with the malnutrition and stunting still facing too many in PNG. Much can be done to improve the productivity as well as drought and frost resistance of PNG’s subsistence crops. And there are many more agricultural export opportunities into the growing markets of the Indo-Pacific (see recent coverage of vanilla beans). PNG is missing the key opportunities of linking with the rapidly growing markets of the Indo-Pacific region.

It insults the intelligence of the local business community and international investors by having its 6th priority as “Establish a gold bullion bank to address exchange rate shortages”. Gold-miners in the country beware! This is a very scary – even looney – idea which will undermine confidence. And a “bullion bank” will not address foreign exchange shortages – at best it will make the excess (trapped) liquidity in PNG’s economy even worse.

And “revenue-led growth” as priority 4?!  A tax is a tax and generally harms growth.  Of course I understand that increased revenues are necessary to deal with current fiscal mismanagement and to fund key areas of expenditure but it is a worrisome mindset to portray tax increases as leading a growth path.

There is no clear political or economic philosophy for meetings its claimed objectives of more inclusive growth.  There are no assurances that the anti-growth, anti-business elements in planned policies such as agriculture, SMEs and land will be dropped. There is no mention of private-public partnerships. There is a worrying amount of state-based action in the accord and very little about facilitating the private sector with pro-market policies.

The best element of this document is placing the National Population Policy as the first objective. PNG needs to do more to deal with this challenge.  However, research indicates the best ways to achieve this “demographic transition” is through women’s empowerment – and a key element of this will be in the agriculture sector. So the objective is good, but Alotau II undermines the two key ways for making progress.

Commendably, there is more emphasis on improving the quality of education – arguably a lesson learnt by the government.

However, on the continuing spurious “free health” policy claims, the government continues to deceive itself that K20m delivers on such a program, yet alone whether it can both afford and administratively implement a true “free health” program. A decision to revise the medical supply contract awarded during the election campaign by the former Health Minister would have been a much more believable and appropriate objective.

PNG’s infrastructure budget has been slashed by the government. The Transport budget has been cut from K1,481m in 2015 to K897m in 2017 – a real cut of 52% after allowing for inflation – see here.  And major future cuts of around another 30% were foreshadowed in the 2017 budget (and that was before the most recent deficit blow-out). How is it credible to have such a long list of infrastructure activities in the Alotau II accord when the budget outlook (according to PNG Treasury) is so constrained?

There are very interesting references to changes in the federal structure of PNG. The proposed 60/30/10 central/provincial/landowners split in mining revenues (does this also include petroleum/gas?) would be a major change. Was this  the element that had Sir Julius Chan join the government – a way forward for much greater autonomy for New Ireland with its rich Newcrest mine? And also of interest for the 2019 Bougainville independence referendum.

The failure of the Accord to consider adequately women’s empowerment is also a sad indictment of the effectiveness of Australia’s aid program. This is a key priority for Australia reflecting the very strong and commendable views of Foreign Minister Julie Bishop.  Some in the Australian High Commission in Port Moresby will be trying to explain the manifest lack of real influence the aid program is having in the area of women’s empowerment (and simply saying it wasn’t mentioned in Alotau I is a poor glory claim as at least the latter mentioned issues such as maternal mortality). Of course there have been many programs, but ultimately the real policy test for evaluating the effectiveness of Australia’s gender programs rests on whether  it gets an adequate profile in the new government’s most important political document? On women’s empowerment, clearly the answer is “No!”.

It is interesting to compare Alotau II with Alotau I (see here for the latter – pdf).  Frankly, Alotau I is a better document.  Still clearly aspirational and wanting to do too much but at least there were time-frames and more holistic approaches. There is more recognition of economic challenges in Alotau II, but no sense the implications of these have been understood.

May the 100 Day plan promised by Charles Abel have a more credible approach to dealing with PNG’s considerable challenges.  I will provide a snapshot of these challenges (and how PNG ranks relative to its neighbours) in the next article. And then an outline of two very different development paths facing PNG.