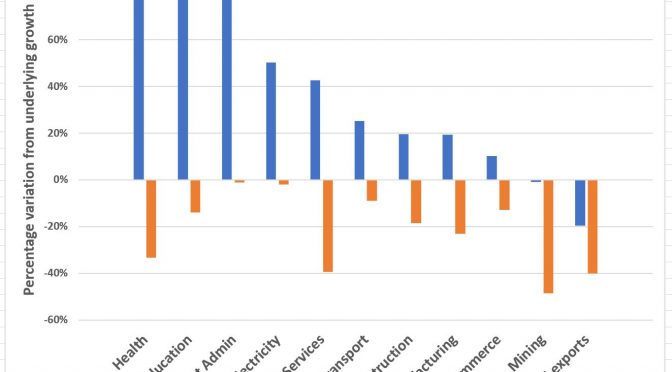 “On almost every measure of economic welfare, the PNG economy would have been better off without the PNG LNG project”.

A major study is being released today by Jubilee Australia titled: “Double or Nothing: The Broken Economic Promises of PNG LNG”. This report, co-authored by myself and Dr Luke Fletcher, compares the projected economic benefits of the PNG LNG project with actual outcomes.

The new study uses PNG Government data to examine the predictions of the 2008 project report commissioned by ExxonMobil and promoted by Oil Search. This examination finds that the very positive predictions for the PNG economy were largely incorrect. Specifically, growth in the resource sector has matched the confident predictions even with the fall in oil prices in 2014. However, all other parts of the PNG economy have not done as well as predicted. This is a major “broken promises” gap. This is the basis for the title of the latest report – the PNG LNG project promised to double GDP, but the outcome of 10% is close to nothing (especially when the size of PNG’s GDP is facing a major downgrade in the latest NSO 2015 update). Revenues to the budget are only one-third of expected levels, and after allowing for project costs, will continue having a net negative impact on the budget (so below nothing) until around 2024.

Of even greater concern, the examination finds that the PNG economy, apart from the resource sector, has actually gone backwards relative to its underlying growth path. The most likely explanation for this sad outcome is PNG has slipped again into poor policies associated with the resource curse. The temptations of the rosy PNG LNG promises were too strong for politicians despite warnings from PNG Treasury, BPNG and outside academics. During the O’Neill/Dion government, PNG descended into very damaging economic policies of a bloated budget and PNG’s largest deficits ever, fixing the exchange rate at an over-valued level, making foolish investments in areas such as Oil Search and harming the independence of PNG’s economic institutions. With the focus being so strongly on getting the PNG LNG project operational, there was a lack of policy emphasis on other parts of the economy. This is the “resource curse” gap.

PNG needs to learn the lessons from this experience. This is the third time that PNG has suffered from the resource curse: the first was with Bougainville Copper and the experience of the late 1980s; the second was the Kutubu/Porgera expectations that crashed so badly in the mid-90s; and the PNG LNG period is the third resource crisis.

The benefits of PNG’s resource wealth could in theory be tapped without damaging the rest of the economy. But it would require very different choices by PNG’s politicians. PNG probably lacks the strong governance and institutions required to deal with the powerful resource sector lobby. Even in Australia, the power of vested interests around the resource sector is blocking sensible options for sharing resource benefits more equitably and efficiently. Aggressive tax minimisation is practiced. Until PNG has stronger governance arrangements, there is a high risk that major new resource projects will simply repeat this cycle of falling into the resource curse, and damaging the rest of the economy.

Fundamentally, PNG needs a new development path – one that is more inclusive and delivers greater benefits to the people of PNG. A resource-led path is clearly failing – in terms of economic welfare, most people in PNG are one-third worse off now than in 1980. PNG’s comparative advantage is not in oil and minerals. Rather, it is the richness of its peoples’ cultural diversity, its extraordinary beauty and biodiversity, the wealth of its soils. PNG has better development options.

This is the first of several blogs covering  the PNG LNG report. This blog provides some of the key numerical findings of the “Double or Nothing” report. The complete report can be accessed here – it is the third report

Future blogs will cover in more detail the current elements of PNG’s resource curse, the analysis of revenue gaps, and more technical issues not suitable for a general report, including a more detailed examination of the failed PNGGEM model and a sensitivity analysis.

The key macro-economic findings are covered in the following graph. 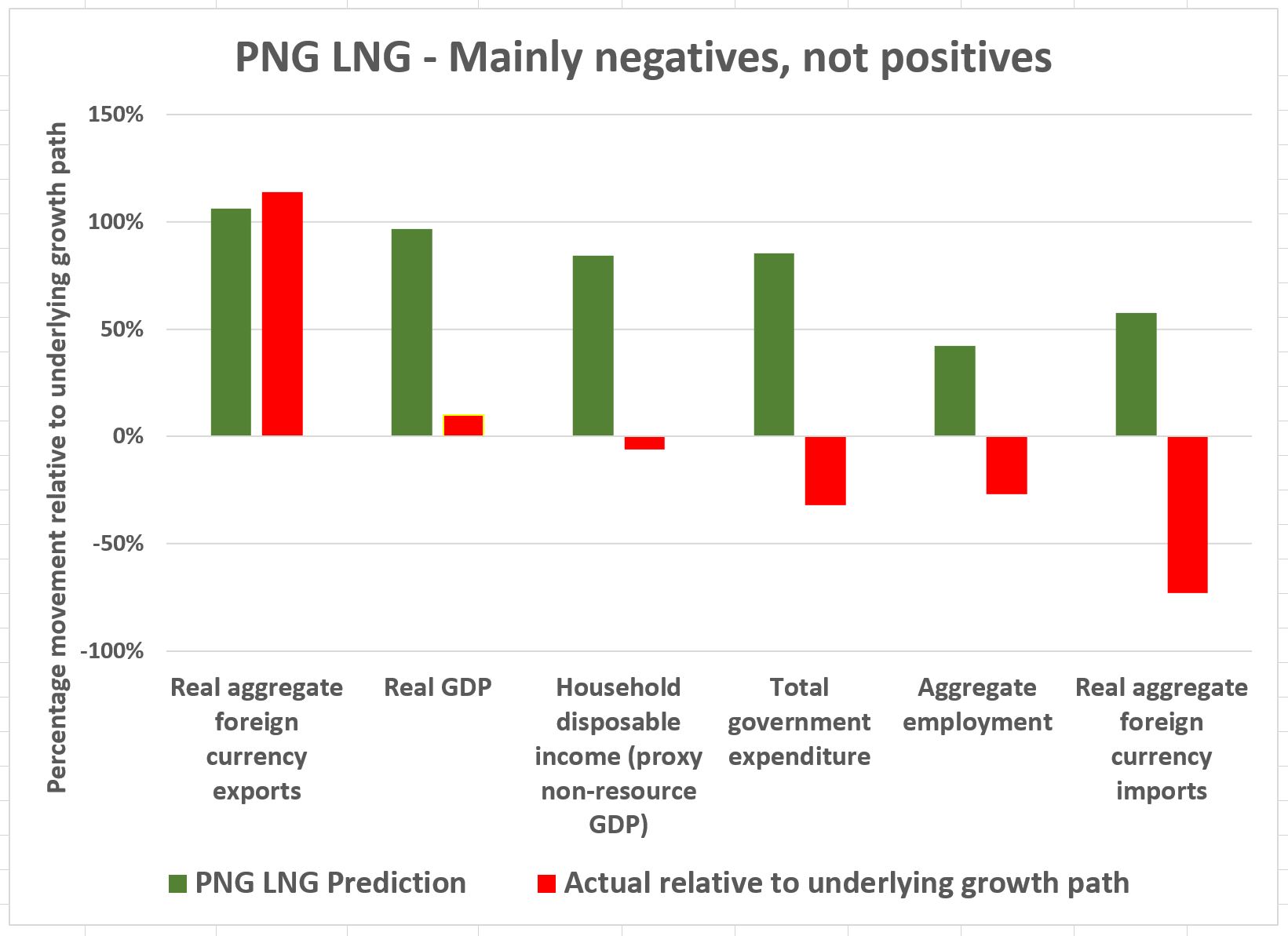 The key sectoral findings are covered in the following graph 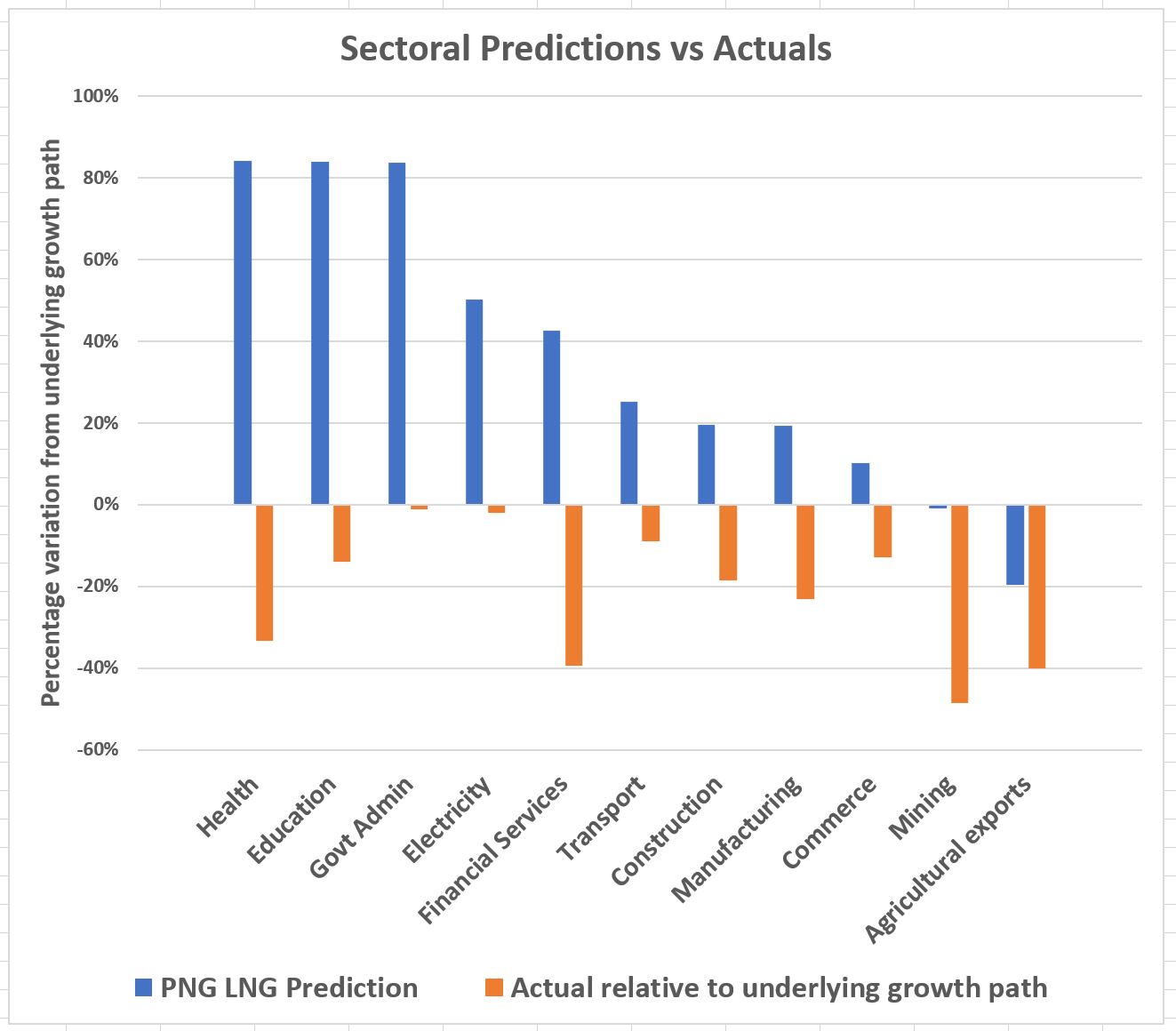 The specific figures for the above graphs are provided in the following table: 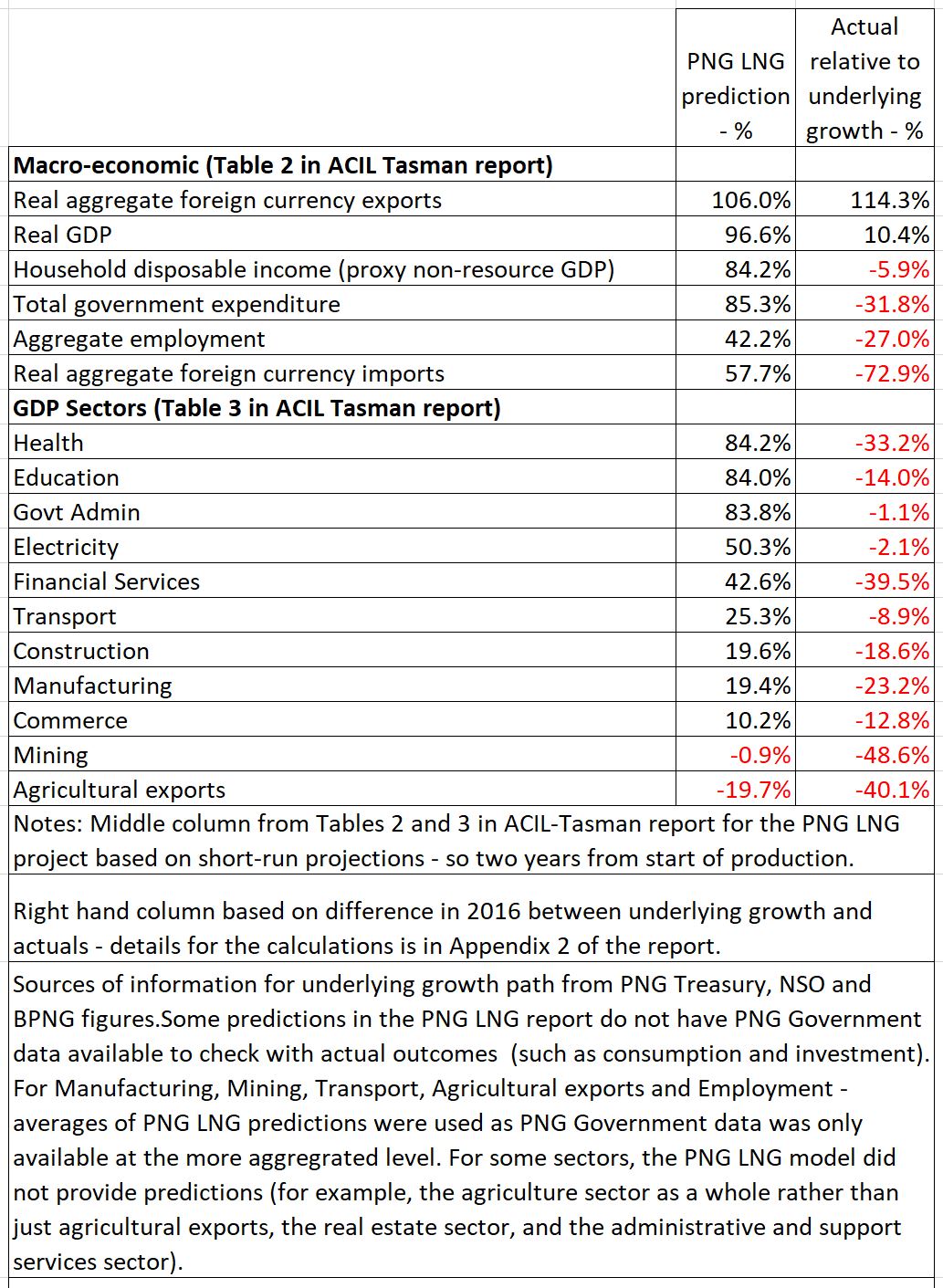 The predictions from the ACIL-Tasman model were not specific figures such as the Kina size of GDP or the actual number of jobs generated across the entire PNG economy. If they were, they could be directly compared to actual figures from PNG government data. Rather, the ACIL-Tasman predictions from their CGE model are described as “Values expressed as percentage changes from the underlying growth path.” These are the percentages shown in the middle column of the table above. As just percentages were provided, work was required to estimate the “underlying growth path” and what value this would have been in 2016. Fortunately, this type of trend analysis is relatively simple.

The gaps between the PNG LNG predictions and 2016 outcomes are generally extraordinary – there is a yawning chasm between spruiked expectations and outcomes. The only areas where there are not significant gaps are in the resource sector itself. The PNG LNG model analysis was based on the assumption of a 440% increase in the value of oil and gas exports. This was an accurate prediction and not affected by the 2014 fall in oil prices. This is because oil prices in 2008 (when the prediction was made) were also suffering from the global financial crisis and were based on oil prices of $US65 per barrel. In 2015 and 2016, although oil prices fell lower, this was offset by  production output being about 25% higher than predicted in 2008. The 440% jump in the value of these gas and oil exports led to a positive outcome for exports as a whole.

However, outside of the resource sector (which feeds into a slightly positive GDP figure growth of 10%, but 87 percentage points less than the PNG LNG prediction of a 97% gain), all other economic indicators are lower than the underlying growth path. This is shown by all the numbers in red in the right-hand column above.

On every other measure of economic welfare (household incomes, employment, government expenditure, imports and every non-resource sector of the economy), the PNG economy currently would have been better off without the PNG LNG project, often drastically so.

Details for the trend analysis to determine the underlying growth path are in Appendix 2 of the “Double or Nothing” report, with a worked example on how GDP was calculated in Section 2.2 of the report.

2 thoughts on “PNG LNG – Failed predictions and the resource curse”