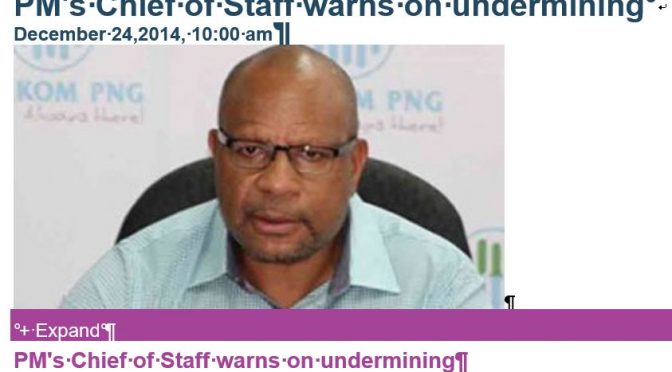 The recent APNGBC meeting concluding in Brisbane this week was an interesting experience for the co-author of the “Double or Nothing – The Broken Economic Promises of PNG LNG” report that raised questions about the overall benefits of the PNG LNG projects – indeed, its potential costs.

In his keynote address to the APNGBC conference, PNG’s Prime Minister Peter O’Neill made clear he considered an analysis of the PNG LNG project as utter nonsense and being fake news.  It was surprising that the Prime Minister mentioned the report. Once mentioned, the dramatic nature of the attack was not unexpected. Unfortunately, I’d been down that road before – so a quick history of “fake news”.

In December 2014 I dared suggest that the fall in oil prices would have adverse impacts on PNG’s budget, balance of payments and economy (see the ANU Discussion Paper here). This immediately led to a media release from Prime Minister O’Neill’s office by his then Chief of Staff (now the Chief Secretary for PNG’s public service) Isaac Lupari denouncing the analysis in the following terms:

“Importantly, Ambassador Lupari said, despite claims by Polye and Flanagan, PNG is largely protected from oil price fluctuation because forward contracts were signed before the recent change in oil prices.

“Their [Flanagan’s] argument is based around the claim that PNG will receive substantially less income from LNG sales and this is simply not true,” Ambassador Lupari said.

“PNG LNG exports and prices are predominantly locked into long-term forwards sales contracts. In simple terms this means that Papua New Guinea will receive the same price for LNG.

“Mr Flanagan should know that LNG prices are locked in but he continues to play politics with business perceptions and the Opposition is going along with this nonsense.

“Polye-Flanagan appear to have no conscience when it comes to talking down the economy for their own political self-interest, and do not care of harm this could cause to small business and jobs in PNG.”’

If this analysis, contained in a thorough and peer-reviewed ANU Discussion Paper, had been listened to and considered when the analysis was made, PNG would have been in a better position to quickly respond to the emerging crisis of falling oil prices. There would have been less harm to small businesses and jobs in PNG. Of course PNG was not protected through LNG contracts and I was not working for Polye (I did as a public servant reporting to him as the then Treasurer until leaving PNG in August 2013 – so sixteen months earlier – in the same way as I did in Australia reporting to Treasurers Costello or Swan). When the PNG Treasury budget update (seven months later) confirmed the loss of revenue was even more devastating than I predicted, then I was banned from the country by the Prime Minister.

Speaking truth to power hurts. I miss seeing my friends in PNG.

Treasurer Abel’s response in welcoming the Jubilee Australia report on the same day was more measured. Presumably, he could see that the report actually strengthens the hand of PNG in its fiscal negotiations over the foreshadowed LNG project expansions – the second recommendation of the report for PNG to receive a fairer and earlier return on its LNG resources. He is also a supporter of the Extractive Industries Transparency Initiative and likely would be supportive of the third and fourth recommendations which focus on better transparency. I still consider that as Treasurer he has more work to do on the first recommendation concerning better policies – especially the foreign exchange crisis.

The Jubilee Australia report numbers will be reviewed by an accounting firm with the support of the LNG industry. PNG’s National Research Institute will also present a different and likely defensive viewpoint given the serious concerns about its model (PNGGEM) that informed the misleading ACIL-Tasman analysis. I look forward to engaging with these subsequent reports, including learning from them where appropriate.

The report does not in any way deny the many direct benefits that have flowed to many from the PNG LNG project. For example, it notes that the number of jobs that have been directly created of some 2,500 is greater than the 800 to 850 initially estimated. The benefits to landowner and other companies are also acknowledged. However, the report is a helicopter view – looking at the economy as a whole rather than specific communities or companies or localities. With a starting approach of examining ACIL-Tasman predictions, the report focuses on how things were going in 2016 – two years after the production phase.  The high level, helicopter view of 2016 says that when looking at the economy as a whole, on most economic indicators, PNG has fallen below PNG’s underlying growth path from the late 2000s. The only feasible explanation for this poor performance is policies associated with PNG’s return to the resource curse, and many of these key policy shortfalls are linked to the PNG LNG project. If there was no PNG LNG project being discussed in 2008, then the government and businesses would have been looking at growing the economy in other ways – and hopefully more inclusive ways.

As the report states in its conclusion “The potential benefits of PNG’s resource wealth could in theory be able to be tapped without damaging the rest of the economy. But it would require very different choices by the PNG’s policymakers.”

As the government considers this report, there are potential benefits for PNG in terms of encouraging public discussion about PNG’s future options and even supporting PNG’s negotiating hand with the LNG companies. Hopefully, with the benefit of hindsight, “fake news” comments will fade and true benefits will be understood.

2 thoughts on “Benefiting from Hindsight”