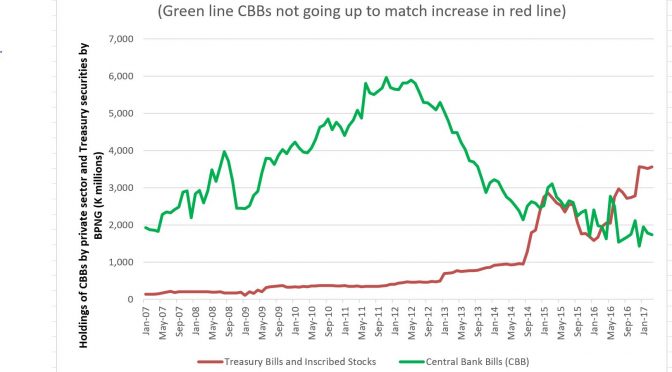 The Bank of PNG’s recent Monetary Policy Statement was the worst for more than a decade.

BPNG is trying to hide the truth that its monetary policy actions are killing growth prospects in PNG.

This is the second of three articles analysing the worrisome errors in the statement.

In a second extraordinary attempt to justify its actions – see here for the first – BPNG argues “In light of the Government’s tight cash-flow and domestic financiers reaching their limit on sovereign exposure, the Central Bank had (emphasis added) to assist the Government by buying Government Securities (Treasury bills and bonds) when the auctions were undersubscribed.”  This was known as the “Slack Arrangement”.

Indeed, it is a very slack arrangement!

No central bank governor has to assist the Government in this way. There may be extraordinary circumstances when such actions become necessary. These could include financing during wartime, and possibly for dealing with a very short-term financing crisis with a known resolution. However, the fall in international commodity prices occurred three years ago at the end of 2014. PNG should have got its fiscal house back in order by now. Printing money takes the pressure off the government to make the needed changes – including putting in place better policies to get growth going again or reaching out to the international community for assistance.

What is even worse is that the Governor is pretending that there is not a problem. Indeed, he mischievously argues “The Bank has actively sterilised (emphasis added) this liquidity generated by the Slack Arrangement through on-selling of the Government securities and CBBs to the market.  As at the end of August, the Bank’s holding of securities (Treasury bills and bonds) under the Slack Arrangement was K1.600 billion. It has issued CBB and Tap totalling K1.588 billion.”

So the argument is BPNG printed K1.6 billion but then took almost exactly the same amount out of markets so there is no risk to the economy.

This is not true.

The following chart follows a key element of PNG’s monetary policy over the last 10 years.

BPNG can help control inflationary pressures in the economy through buying and selling its Central Bank Bills (CBBs). There are other tools but these have not been actively used in recent years.

CBBs essentially take money away from the private sector (so it is no longer available for lending) and park it with BPNG. This can help remove over-heating pressures from the economy which can lead to accelerating inflation and balance of payment problems with foreign exchange shortages. 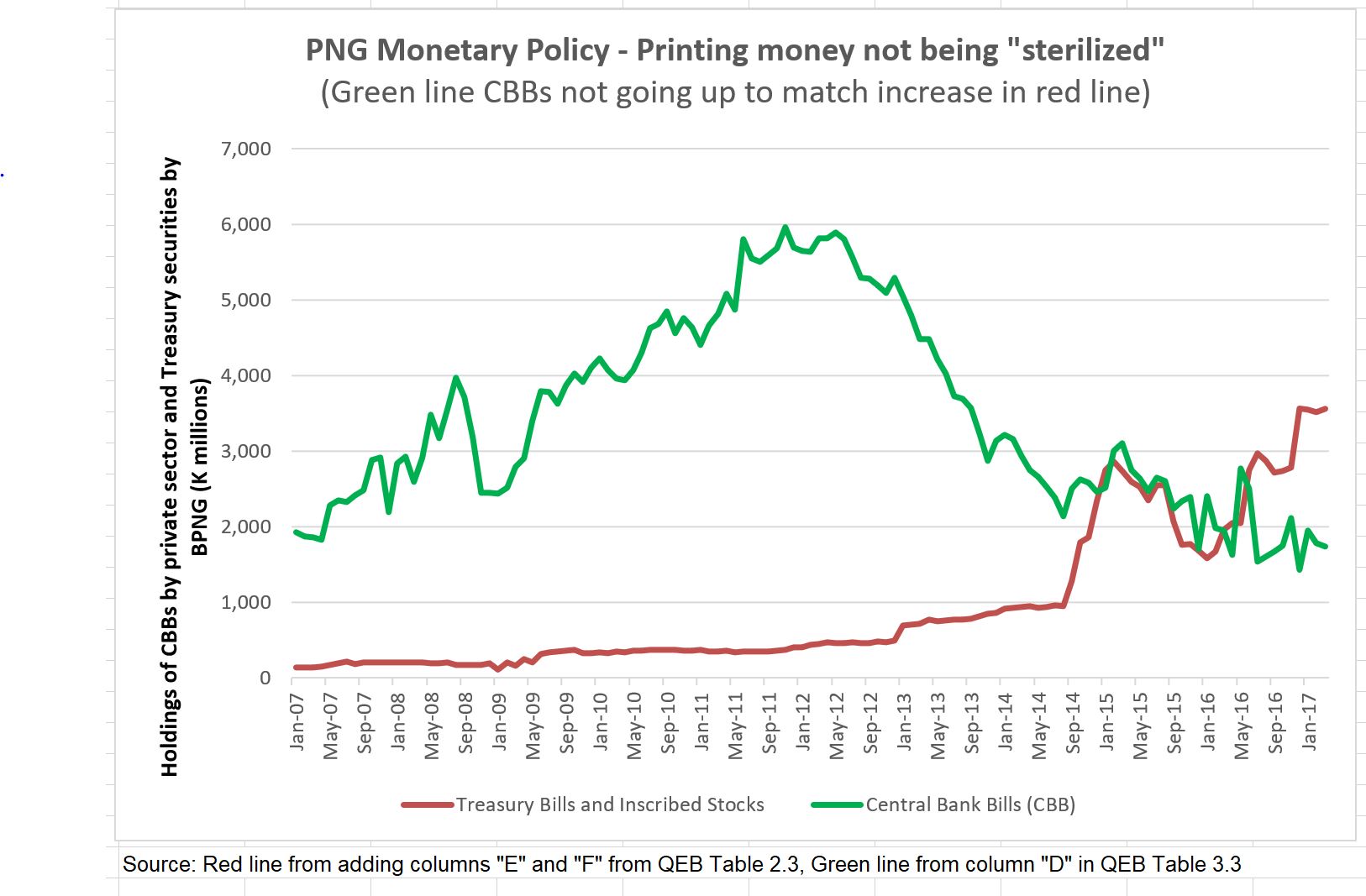 Appropriately, BPNG rapidly reduced its level of CBBs in response to the Global Financial Crisis in 2008 to help stimulate the economy (shown by the dip in the green line in 2008).

Also appropriately, it took excess liquidity out of the banking system during the commodity price boom and then the PNG LNG construction boom from 2009 to 2012.

BPNG started in early 2012 to release some of these funds back into the market (the green line going down). In reality, especially with Treasury Bills moving into shorter-term securities of three months, this has effectively created the space to allow PNG’s private financial institutions to swap CBBs for Treasury Bills (which was confusing monetary policy with fiscal policy objectives).

Release of CBBs effectively has been a major source of funding from the private sector for the government’s historically high budget deficits.  And these high deficits can also tend to over-heat the economy.

But BPNG has gone even further than creating space for the private sector to buy up government securities as the Slack Arrangement means BPNG is also directly funding the deficit.

So with that simplified technical background, what about the claim that the Slack Arrangements purchase of about K1.6 billion in government securities has been effectively sterizilised?

First, any reference to K1.6 bn only refers to the most recent period in which it has been acquiring government securities (the red line going up).

BPNG currently has, according to its detailed tables in the Quarterly Economic Bulletin Table 2.3, K3.5598 billion (at March 2017 – the latest available detailed data) in government securities.

So BPNG actually has some K2 billion more in government securities than the K1.6 billion mentioned in its latest statement.

And if BPNG is only referring to a 12 month increase in its holdings of government securities (so not the full level), one can get a K1.6 billion increase figure by only looking at the increase from March 2016 to February 2017 (so ignoring the earlier K2 billion).

Second, did the green line go up by K1.6 billion during this time to sterilise the K1.6 billion extra in the red line (as claimed by BPNG)?

Unless there is some new information that the BPNG has not made available to the public, BPNG has not been “sterilizing” their increased holdings of government securities.

And this is putting the economy at risk by delaying needed adjustments and building pressures on foreign exchange.

BPNG is undermining its own credibility with deceptive statements about dealing with the side-effects from printing money.

Rather than misleading claims about “sterilisation”, the statement should have provided more information on the Slack Arrangement. Currently, it could appear as if the Slack Arrangement is an open chequebook to the government. This would undermine confidence in the PNG economy.

BPNG should be spelling out to the public and international investor markets the guidelines and limits on the Slack Arrangement and any planned exit strategy. This would be a better way to build confidence.

BPNG – you have a proud history and you can do better for the people of PNG.