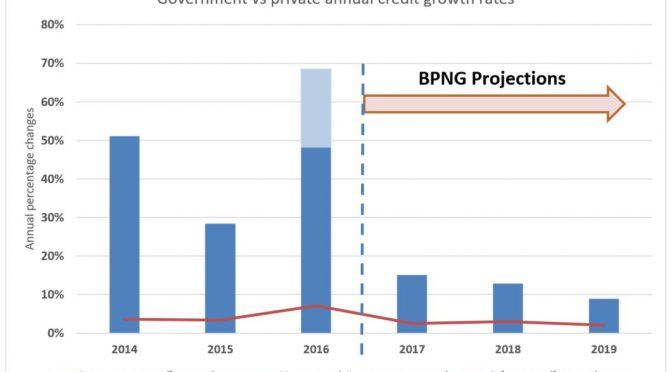 One final indication of how PNG’s central bank  is  failing the PNG people is its dangerously complacent view on appalling credit growth rates to the private sector.

The latest statement estimates private sector credit growth being 2.5% in 2017.  It then states “The Bank considers the projected growth in monetary aggregates sufficient to support the growth in the non-mineral private sector” (emphasis added).

However, 2.5% is much less than BPNG’s forecast of inflation of 6% in 2017 – so there is actually less real money available. Real credit growth is actually a negative 3.5%.

This is an extraordinary contrast to earlier Monetary Policy Statements.  For example, going back eight years to September 2009 when Sir Wilson Kamit was Governor of BPNG we get the statement: “Private sector credit is expected to slow further to 15.0 percent in 2009, as the increase in cost of borrowing will slow aggregate demand. This is considered sufficient to support economic activity” (emphasis added).

So in 2009, the private sector needed 15% credit growth to support economic activity.  In 2017, the view is that 2.5% credit growth is sufficient. (Inflation expectations in both years are either 6 or 6.5%.)

Something has gone seriously wrong with PNG’s model of development. The latest Monetary Policy Statement from BPNG reveals a dangerously complacent view about what is adequate to support the private sector. This is especially concerning given the way BPNG is underplaying problems facing the private sector through foreign exchange restrictions as well as its support for an explosion in growth to the government sector.

The extent of complacency is shown in the following graph.  This sets out annual credit growth rates to the private sector (the low red line) relative to the government sector (the very high stacked blue columns).  These figures are straight from Table 1 in the latest Monetary Policy Statement. 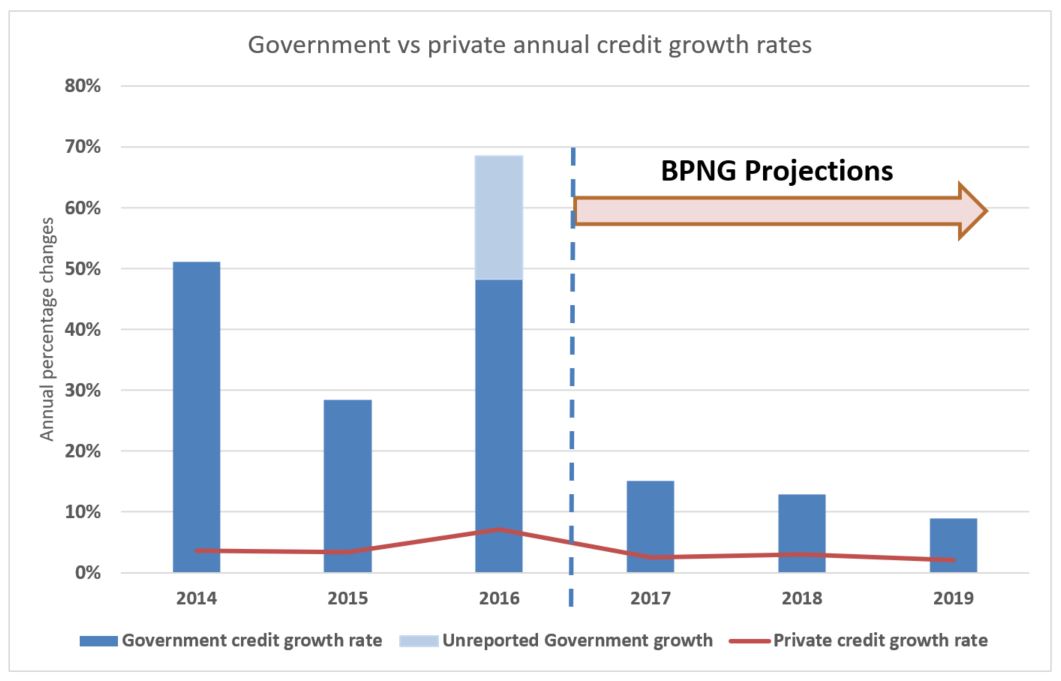 This shows how badly the private sector is doing relative to the government sector.

Indeed, things are actually worse. The 2016 growth rate in government sector credit is actually understated by 20 percentage points. Using the source material for the table (Quarterly Economic Bulletin Table 1.31, net claims on central government moved from K5,345m in December 2015 to K9,008.7m in December 2016, an actual annual increase of 68.5%, much higher than the already extraordinary 48.3% mentioned in Table 1).  This is shown by the additional light blue area in the graph for 2016 (figures for 2014 and 2015 were correct).

Future projections that the rate of government credit growth will slow down are also suspect.  For example, in the September 2016 Monetary Policy Statement, BPNG predicted the government credit growth for 2016 would be less than 2%.  It turned out to be 68.5%. The 2017 year projection of 15.1% is more realistic, but is almost certainly understated given the 2017 Supplementary Budget was not sufficiently credible in winding back the budget deficit to 2.5% of GDP (see here).

The following graph shows how credit to the government is growing very rapidly as a share of the economy, while credit to the private sector is falling. 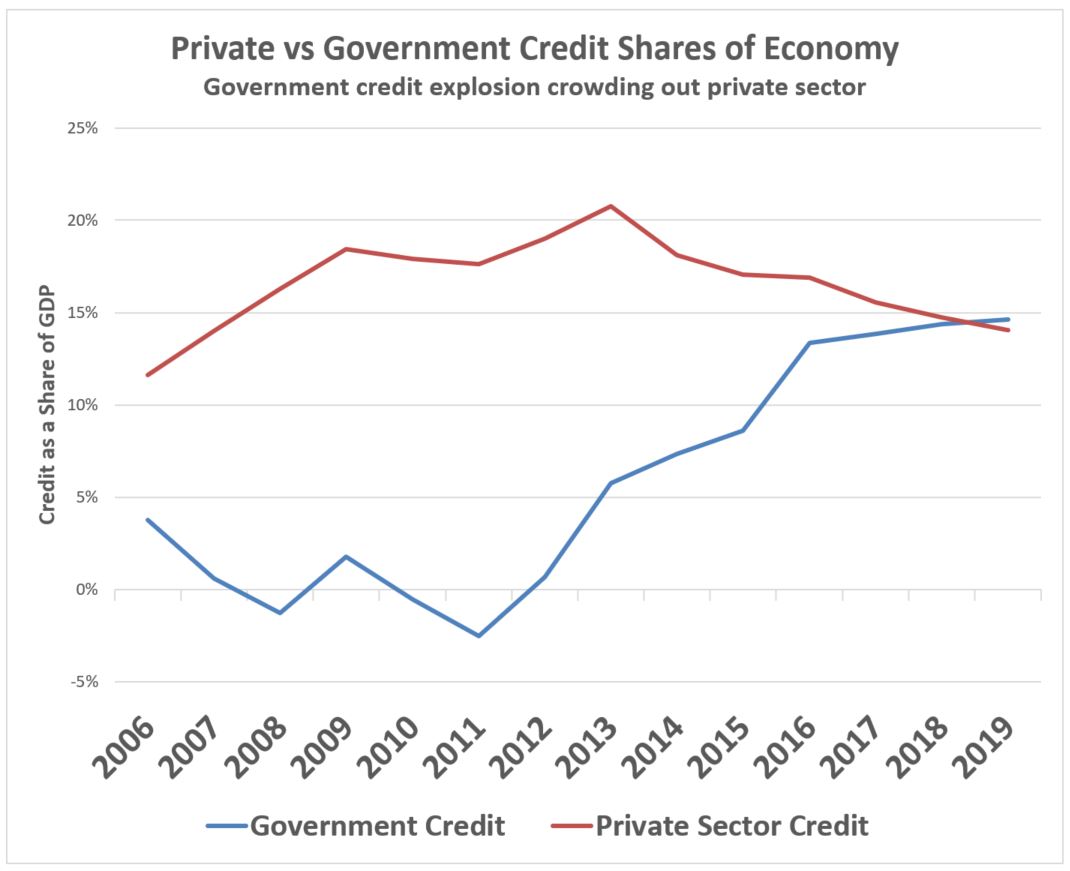 The graph uses BPNG figures (from QEB Table 1.31) with the National Statistics Office figures of GDP.

As much of the government sector growth includes relatively inefficient expenditure (such as APEC and the South Pacific Games, as well as overinflated infrastructure contracts) this is not good for PNG’s economic growth prospects.

The falling share of private credit in the economy goes to the heart of a lack of confidence by local businesses.

BPNG, and the government, needs to do much more to support private sector growth rates. In part, this will mean ensuring that there are sufficient funds to support bankable projects. This is getting harder because of the explosion in credit to the government.

Messages from PNG businesses need to be considered more closely by government. There are positive signs of increased consultation by the new Treasurer. Considerably more could be done to also improve PNG’s ranking on the Ease of Doing Business scores.

BPNG’s claim that private sector credit growth of minus 3.5% is “sufficient” is ridiculous for a country facing the worst economic growth prospects in the Asia-Pacific region – see here.

BPNG needs to adopt the policies that will remove PNG’s foreign exchange shortages. They need to stop printing money which allows the government to duck the hard decisions. They need to get more money flowing to the private sector to encourage investment and get people into housing.

BPNG needs to stop playing games with statistics and being complacent about the collapse in the private sector.

BPNG is failing to meet the valid expectations of the creators of an independent central bank – a lesson from the devastating economic crisis of the late 1990s.

This is the worst Monetary Policy Statement from the BPNG for more than a decade. Shame BPNG.

There are some great people in BPNG and it is hard to tell what has gone so wrong to create such a poor statement. One hopes the bank’s future actions will build on its excellent work on financial inclusion and start doing its part (along with the new Treasurer) in getting the PNG economy back on track.