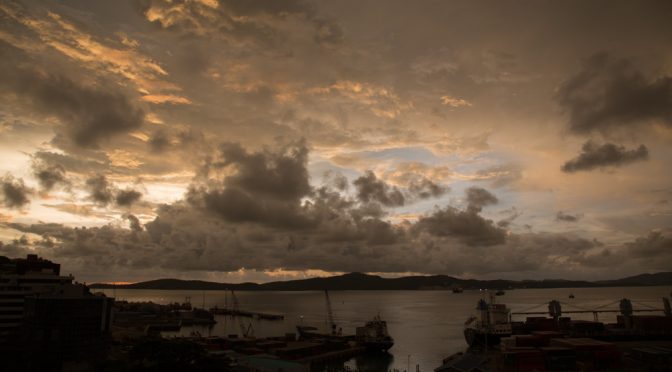 There has been some good, bad and confusing news from the Governor of PNG’s central bank, Loi Bakani in recent monetary policy statements (see here and here).

In summary, the good news is:

The “confusions” are as follows:

Overall, this was a much more balanced set of monetary policy statements than we saw in 2017. There were no foolish attempts to try and defend the indefensible – such as the attempt to blame foreign exchange shortages on the banks and to claim all “printing money” actions were being fully offset (see here and here and here). In particular, the moves away from the “slack arrangement” and more flexibility on the exchange rate are very welcome, and there are some positive monetary macro-economic signs (athough still too much complacency on falling private sector credit).

However, the overwhelming message from these recent statements is that on most indicators of economic performance, 2017 has likely been a very bad year yet again for PNG. This would build on what was likely to have been a very severe recession in the non-resource sector in 2015, a likely modest recovery in 2016 post-drought, and a likely return to recession in 2017 (although tax collection figures are more promising if they can be believed – I fear they can’t). PNG needs to turn this around – and even more urgently than currently being done on the fiscal and monetary fronts. However, even if these macro-impediments are removed, PNG also needs much more concerted action on structural policy changes to improve the health, vibrancy and inclusiveness of the economy. Moves towards more protectionist policies (such as the tariff increases in the 2018 budget and targeted infant industry attempts which have failed so badly for PNG in the past) are still very worrying examples of policy positions that are strangling sustainable growth. Increased regulations in areas around foreign exchange management and foreshadowed legislation in other areas are also steps away from improving PNG’s poor ratings on creating a conducive atmosphere for business. And work is needed to try and reverse what seems like growing moves to punish anyone in government that dares suggest a contrary position – whether it be a well-respected manager in public works raising questions about road construction costs, or even a former vice-chancellor seeking greater financial accountability.

There are many parts to the complex puzzle of creating a successful state worthy of the people of PNG. The worried views of international credit ratings agencies, leading to the combined worst downgrades in PNG’s credit rating history, suggests the government still needs to be acting more urgently and on a wider front to un-do some of the damage it has done in recent years.

The best news was contained in the March Monetary Policy Statement where the Governor indicated that from April the central bank was going to stop effectively printing money to finance the government’s deficit (known as the “slack arrangement”). Indeed, the central bank says it repaid K430 million in government securities in 2017 (although it did buy K51.3 million in the December 2017 quarter). This is an important development as it lowers potential inflationary risks and helps clarify that the role of the central bank is about monetary policy, not supporting government deficits. However, there are some announcements that may indicate some more back-door methods for supporting budget deficit financing (see “confusions” below).

Another piece of good news is that there was an overall balance of payments surplus in 2017 of K350 million, up from K30 million in 2016. Within this figure were massive increases in the current account surplus (from K16 billion to K20 billion) nearly fully offset by massive increases in the capital and financial account deficit (also from K16 billion to K20 billion) – the increased surplus disappears in the rounding).

3.       Moves away from fixed exchange rate at unfair value

Another piece of good news is that there appears to be at least a very slow movement away from a de facto fixed exchange rate against the US dollar – although most of this occurred in the first few months of 2018. Of course, the move away from a freely convertible currency in PNG starting in mid-2014 has been a major reason for undermining non-resource sector growth and represents one of the poorest policy choices of BPNG in its history. Hopefully, the reform path will accelerate back to a fair exchange rate (recently estimated by ANZ as between 0.23 and 0.25 USD to Kina). However, this is not a popular move in PNG and politics may intervene – surprising as it would bring significant benefit to the vast majority of people in PNG. If a full move back to a competitive exchange rate is made, adjustment measures will be required – and these would be assisted if PNG reached out for a major structural adjustment policy package of closer to USD6 billion rather than the paltry USD0.6 billion being discussed.

The final piece of good news is that inflation appears to be well under control, with the headline inflation rate falling to just 4.7% in 2017. Apart from some very specific effects (such as the earlier spike in buai prices), this declining figure probably reflects the lack of demand in the economy due to poor business and household conditions.

The worst news is that on almost all economic indicators, the non-resource parts of the economy are still really struggling. Indeed, there is growing evidence that the key non-resource sectors in PNG are probably in their most sustained recession since Independence, although probably not their deepest.

The drop in private sector employment in the non-mineral sector of 4.8 per cent in 2017 is catastrophic news. This would be the worst drop in employment since 2001 (a 5.5% fall) and slightly higher than the 4.6% fall in 1995. However, both of those previous examples were just bad years among years of employment growth. In PNG’s current recession, employment has dropped by 0.8% in 2014, 0.7% in 2015, 2.1% in 2016 and now 4.7% in 2017 – so an aggregate fall of 8.3% in non-resource sector private employment. Before the current recession, this employment index has never gone backwards for more than two years – although the two year drops in 1982/83 (although offset by a major increase in mineral employment) and 1990/91 were more severe.

Lending to the private sector also fell by 3.4% in 2017 – once again even before allowing for inflation. This means that there was a general fall in bank lending for business investment, house purchases, cars and other items. Once again, this is another indicator of a recession – more severe than the small recession of 2008 (don’t believe all that government hype about 15 years of continuous growth – the NSO says the economy went backwards slightly in 2008) and possibly larger than the late 1990s recession.

The balance of payments figures also suggest a lack of confidence in the economy by foreign investors. When explaining the large deficit in the capital and financial accounts (the increase from K16 billion to K20 billion mentioned above), the report states the “outcome was due to outflows in direct, portfolio and other investments reflecting equity outflow from liquidation of investments ….”.  PNG should be looking for major foreign investment inflows not large net outflows. Setting up the occasional dairy factory misses the point that incentives need to change to make PNG a good investment destination. If the underlying issues are not addressed, then the possible gains from APEC will disappear due to poor policies. There was a recent reference that PNG could benefit from the APEC meeting in a similar way to Peru in 2008 – but in 2008 Peru had been going through more than 15 years of structural adjustment guided by the IMF and had a much more positive set of policies to encourage broad-based growth including foreign investment and trade than PNG’s current settings. Indeed, the January 2009 IMF Article IV consultation soon after Peru hosted the APEC meeting commented that the APEC meeting had a temporary adverse impact on Peru’s growth because of the reduction in working days!

Sales figures also remain negative – even in nominal terms. Across 2017, non-resource sector sales fell by 0.9% – so by over 5% in real terms after allowing for inflation of 4.7% in 2017. However, the second half of 2017 was particularly tough, with non-resource sales figures falling 7.8% in the September quarter and a further 3.0% in the December quarter. Any hope for a turnaround early in 2017 was swamped by a very tough second half.

Understanding the extent of PNG’s on-going recession would be clarified if National Accounts figures were released. There are preliminary figures for 2015 – and these indicated the economy was about 10% smaller in nominal terms and 5% in real terms than previously estimated by the PNG Treasury. This is a massive correction. However, the detailed figures have not been released on the performance of the non-resource economy two months after the initial release. The NSO has indicated that it will release figures up to 2017 before APEC. As long as these are not tampered with, this will be a useful building block for transparency and helping guide policy choices.

The latest December quarter report provides some interesting additional detail on financing of the claimed 2017 budget deficit (a future blog on the FBO will argue the deficit is probably significantly larger). Specifically, the report notes domestic financing of the deficit totalled K916.6 million. This consisted of increased purchases by the private financial sector of 1,870.9 million and reduced purchasers by the central bank of K430.3 million and SOEs of 30.9 million – so a net increase in government securities of K1,409 million. So where is the gap to net domestic financing of K916 million? The answer is “presented cheque floats from the previous year was K492.4 million”. Presumably, this was a reduction in government liquid assets with the central bank. The confusion is whether the drawdown of these cheques in 2017 have been added to the measured budget deficit in 2016 as they presumably reflect expenditure in 2016? The 2017 FBO indicates that combined with the use of K180.4 million from the drawdown in cash balances of government agencies, net domestic borrowing totalled K736.2 million. However, based on BPNG figures, there has been a distinct shift towards private financial sector financing of the deficit (an additional K1,870.9 million in 2017), much greater than I expected when I read through the FBO. The uptake is somewhat surprising given frequent comments about superannuation funds and banks reaching “caps” on the level of government securities that can be held in their portfolios. This mismatch is confusing.

A second interesting component of the December quarterly statement was the announcement of new conditions around short term lending between the banks and the central bank. Such trades (called repos) now need to be secured by pledging a holding of government securities as collateral. Presumably, given the role of such trades of liquidity management by banks, this will increase the private demand for government securities, and help with even further financing of the budget deficit. The value of this change is not known – although the 2016 BPNG Annual Report indicates there was little use of repos in 2016 so it may have only a very marginal impact on demand.

A third confusing element of the announcement is that no comment was made about the negative news of recent credit rating agency assessments. The downgrade of the credit rating of the PNG government flowed onto a downgrade in the credit rating of BSP – PNG’s largest bank – on 30 April. This potentially moved a significant share of BPNG’s domestic investments to a higher credit risk (in 2016, K1.8 billion or half of its domestic investments had a B+ rating – presumably most of these with BSP). The implications of such a downgrade deserved a comment – they are the worst combined downgrades in PNG’s history. Under the Central Bank Act 2000, the Governor is required to provide special reports to the Treasurer on “adverse conditions that threaten the country’s monetary stability, affect monetary policy or the economic and financial policies of the government.” If the worst credit downgrades in PNG’s history do not generate a special report or general comment, it is difficult to know what would.