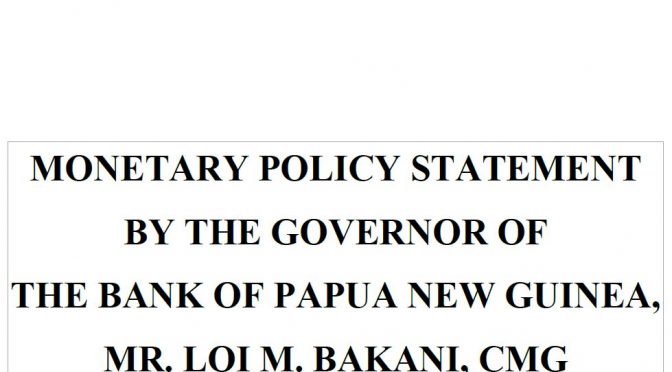 The good news is that PNG’s inflation rate is falling.  Good progress continues on financial inclusion initiatives and technical improvements in the banking system.

The bad news is that the September 2017 Monetary Policy Statement is the worst for more than a decade. It is out of touch with the economic pain being felt by many people and businesses in PNG. Even worse, it tries to cover up its contribution to that pain.

This is sad news for the people of PNG. PNG needs to acknowledge its poor policy settings if it is to improve its economic prospects from being the worst in the East Asia and Pacific region – see here.

The 14 page document follows the usual structure with two exceptions. Both of these exceptions attempt to explain the bank’s unfortunate behaviour in creating exchange rate shortages and printing money to finance the government’s budget deficit.  This is the first of three articles covering the statement.

In an extraordinary attempt to pervert the truth, BPNG argues “The Bank’s assessment of foreign exchange market data shows that the total supply of foreign currency, including the Central Bank’s intervention, was more than sufficient to clear the outstanding daily orders in the spot market.”

In other words, there really aren’t any foreign exchange shortages.

Contrast this with the views of 100 of PNG’s CEOs where foreign exchange shortages were considered the most critical issue faced by businesses in PNG – see here.

Why is it that businesses are saying their greatest challenge is foreign exchange shortages, but BPNG says things are fine? So are PNG’s businesses are lying?  Or is BPNG now into ‘fake news’?

There is little information available to examine the BPNG claim.  BPNG includes the graph below.  However, it is seriously flawed.  There is no definition or source for the lines of foreign exchange inflow and outflows – they do not match Balance of Payment information such as the level of imports and exports. The cumulative balance clearly does include BPNG interventions (contrary to the legend’s description). The green line of outstanding sell orders is known to be an understatement as private banks can’t actually report all of their outstanding sell orders due to prudential limits on their reporting to the central bank. Even then, these orders have risen from essentially zero in 2012 to over K600 millionby August 2017.

And if there have been K4.5 billion in cumulative net foreign exchange flows (the dotted line starting from a minus K1 billion in 2011 to a plus K3.5 billion in August 2017) why haven’t PNG’s international reserves increased remarkably (even after netting off the interventions)? 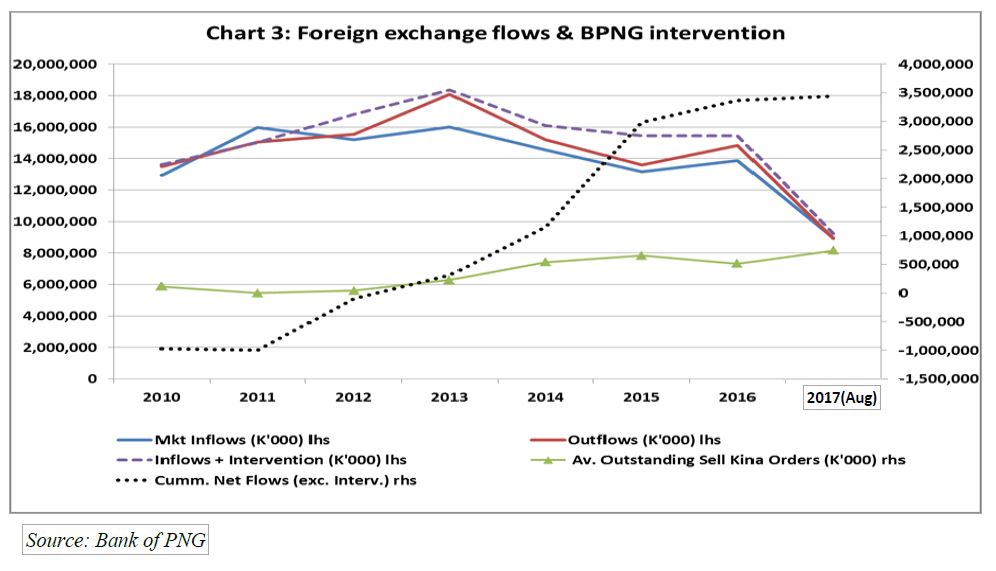 So after providing a deeply flawed and misleading graph, BPNG then tries to shift any blame. They state “However, the Authorised Foreign Exchange Dealers (AFEDs) claim that the inflows are not enough to meet the demand for foreign exchange and the imbalance continues to persist. The outstanding orders by AFEDs reflect frontloading of orders, preference for serving small orders and others not backed with the required kina funds.”

So it is the private banks fault! None of the explanations are credible. For example, why is there a problem having a “preference for serving small orders” (which is arguably a good thing rather than just looking after big businesses)?

BPNG’s foreign exchange actions have already reduced PNG’s imports to only half previous levels in absolute nominal terms and even less in terms of the economy. The following graph from an excellent paper at the UPNG Economic Update in August – see here – illustrates that this killing of PNG’s imports is the most dramatic in PNG’s history. For example, the major currency crisis that led to the floating of the Kina back in 1994 appears as only a small downward blip relative to the collapse since BPNG started fixing the exchange rate and moving away from a freely convertible currency in 2014. 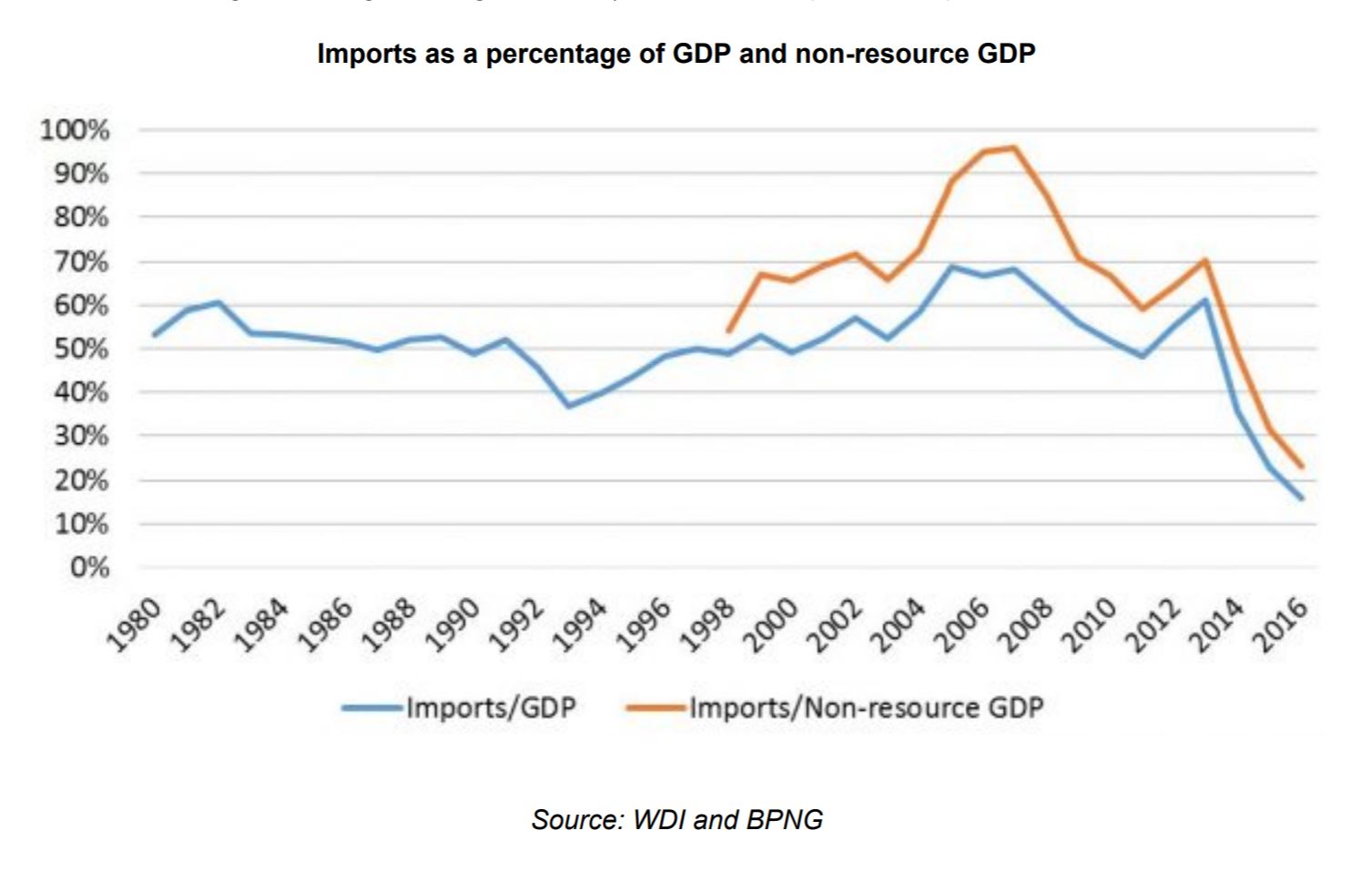 BPNG’s actions continue to descend down this slippery slope with the April 2017 banning of trade financing. This is an extreme anti-small business approach.

No option of trade financing means small businesses can’t continue for that crucial period between placing an order and being able to actually sell the product. Big businesses can cover this cash flow gap but smaller ones often cannot.

This banning of trade financing is a devastating policy for SME’s that are trying to start up new businesses.

Such actions by BPNG on destroying imports and banning trade financing are a growing reason for PNG’s forecast economic performance being the worst in the entire East Asia and Pacific region.

Blaming any shortfalls on the private banks is simply playing games.

BPNG, you are killing growth in PNG.